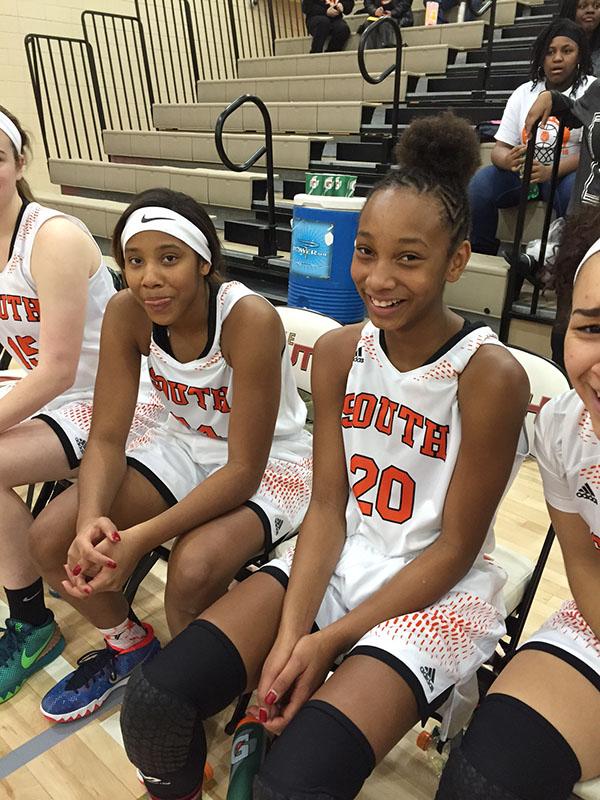 Seventh grader Jade Hill (20) and sophomore Morgan Hill (24) on the bench during their last game. The varsity girls basketball team was under the leadership of a new Nathan McGuire, a new coach. Many young players stepped up to play with varsity at points during the season. Coach and players together worked through differences in style to a satisfying 16-10 final record.

Even with a change of coaches and a heartbreaking last game, the girls varsity basketball team persevered and finished the season off well with a record of 16-10. Adaptability was key in this season’s success: many of the girls emphasized the challenge of adjusting to the new coaching style of Nathan McGuire, who previously coaches in the suburbs. “I was struggling to learn how things were done at South and some were struggling with the different coaching style and philosophy,” said McGuire.

The beginning of the season was rough, expressed many of the girls. Their previous coach, coach T, led the team for two years. “Last year we had a coach that knew our style,” explained Makayla LeMieus, senior shooting guard. She went on to say that coach McGuire’s style, coming from a suburban school, was a hurdle to overcome. “Suburban teams grow up together, city team live apart then get together.”

The girls explain that over the course of the season, they learned how work with his new system and vise versa. “Hard to adjust to a new coaching style” said senior Adria Stewart as being the most difficult part of the season. “As time went on we started getting used to his new system” continued sophomore Morgan Hill.

The coach agreed that the team became more unified as the season progressed.  “We definitely struggled with change in the beginning,” said McGuire. “Honestly, we had a couple meetings in early December regarding the change and what we needed to do to move our team in the right direction…What was evident to me in these meetings is that we all wanted South girl’s basketball to be successful this season but also into the future.”

Great leadership was shown in the team, especially following the difficult change. Adria Stewart, senior team captain, greatly helped the team persevere to successfully wrap up the season. She “was a key to our success later in the season,” explained McGuire.

“I think change was the hardest on her as Coach T was all she knew at South High. Once she started buying into the new system there was a shift within our team and we became much more productive everyday,” Hill and Lemieus also communicated their appreciation and admiration of Stewart’s athletic talent but also her crucial leadership.

Aspiring talent was also brought forth during the season. The team had a very diverse range of ages – there were even a couple seventh graders playing up on the varsity team. Hill, point guard, was praised by her coaches and teammates as being one of the strongest members on the team.

“[Hill] leads the way with her talent. Stat wise she averaged almost 20 points per game and ten rebounds per game for us this year. She’s the type of players the others naturally look to on the floor to help keep us focused,” explained McGuire. Hill plans to continue basketball throughout college. “I plan to play basketball until I get done with college,” she states. “I want to go to a D1!”