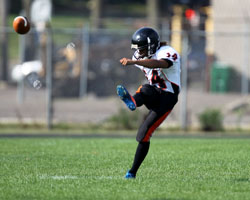 Senior Adrian Kange has played both football and soccer for the past two years, here playing against North on September 1.

Consider for a moment all the time and effort you commit to a sport or activity. Preseason meetings, captains practices, tryouts, regular practices, games, pasta parties, fundraisers and more. Now double that, and you have the commitment that students who play two sports at the same time must deal with.

“It has to be a pretty special circumstance [playing more than one sport] because it’s tough. You can’t put all of your effort in one sport if your playing another,” said athletic director Mark Sanders.

“Rugby isn’t a school sport, so it’s only three days a week, and I wanted to stay active,” she said.

Senior Adrian Kange played both soccer and football for the last two fall sports seasons. Kange originally tried out for the soccer team, but when he found out that the football team was in need of a kicker, he thought the kicking skills he gained from soccer could come in handy. He talked to the football coach, who was willing to accommodate his situation, and was able to join the team.

“Just knowing that I could help out both teams was a motivation for me,” he said, “I liked playing both sports so the fact that I enjoyed doing it was another motivation.”

Committing to double the number of practices and games leaves multiple-sport athletes with very little time for anything else, as Kange experienced. “Sometimes I wouldn’t have a chance to do homework, because if I didn’t have soccer I would have to go to football right away,” he said.

“It’s really hard because you’re spreading yourself thin,” said Sanders. Students that play more than one sport tire themselves out more often and get hurt playing one sport, which can be a problem when the other sport needs you. If you can’t put all of your effort in one sport, then you start losing skill, explained Sanders.

However, playing two sports can be physically beneficial, as well. Some sports have similar skill sets, as in Kange’s case, and being more active contributes to being in better overall physical shape.

Other advantages of playing multiple sports are the social connections that are made. Lindblad is a cross-country runner in the fall, and wanted to get to know the cross-country and track coach better, so she was motivated to join the track team in the spring.

In addition, some athletes play multiple sports to get to know more people and just spend time with their friends while being active. “I got to do two sports I like, and I formed groups with my soccer friends and football friends,” said Kange.

Kange says that he also had to deal with some social issues on the team, because he was unable to fully commit like the other players could. “People would say ‘you’re not on the team because you just kick,’” he stated, “but they always accepted me.”

Sanders concurred with Kange’s observations, adding that teams and coaches aren’t always completely understanding of the struggles of players that participate in two sports at once.

“You make a commitment to your coach, and fellow team mates that their going to count on you, but if you cant be at certain practices because you’re at the other practice or game, then that can hurt your team when they try and put you in,” said Sanders.

Kange said that having games and practices for both sports was challenging, because he would have to skip some football games. “I went to both practices, but soccer was highest priority but when I didn’t have soccer I went to football,” he stated.

Sanders said that he doesn’t usually encourage students to play more than one sport in the same season. “It depends on the person,” he commented, “it takes a lot of energy.”

Kange thinks that his experience in playing multiple sports was a positive experience overall, despite the challenges associated, and encourages other athletes to, as well. “If you’re able to and you have time I suggest it because you get two different experiences,” he added.