South High staff steps up to the plate 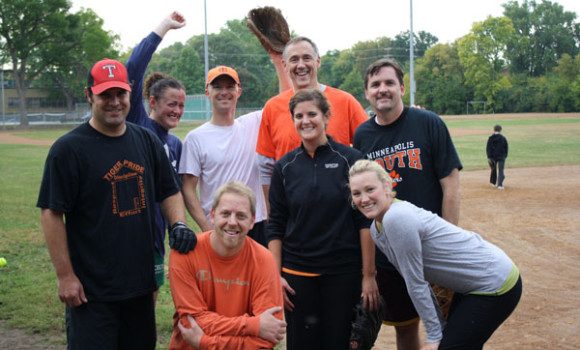 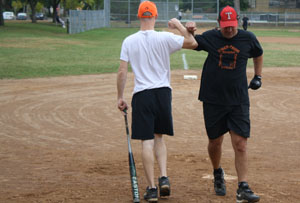 Usually when The Southerner writes about sports, we focus on student athletes, but not this time! In this case, our very own staff members are the stars of the softball field.

For the first five week of school, staff members from four Minneapolis Public Schools — South, Roosevelt, Sanford, and Anthony — took the field every Tuesday afternoon to play a friendly game of softball. South social studies teacher Rob Panning-Miller started the softball league among Minneapolis Public Schools staff members, “I started organizing it over the summer. The first game was on the second day of school, and we’ve been playing ever since.”

Panning-Miller’s motivation for organizing the league came out of his opinion that it’s important for staff to be social outside of school. “I’ve always thought it’s good for staff to do social things, and get away from always talking about our jobs,” he said, “you get to know people you otherwise wouldn’t talk to.” As a second-year South High staff member, counselor Nicole Crowell concurred, saying “what’s been really great about the South High softball team is that outside of the counseling office, I haven’t gotten to know very many people [during my time at South], which I can do on the softball team.”

For the players, it’s not just socializing with staff members from their own school, but also with staff members from other schools. “Everyone on all the teams we’ve played has had a really good sense of humor,” Crowell said, “it’s fun to just laugh with them.” Panning-Miller added that for him, the highlight of the season was when the players changed up the teams, and played middle school versus high schools. “It was fun to mix it up,” he said.

For some of the members of the team, softball has been a lifelong activity. Math teacher Ulrica Loichle played softball in high school, but hasn’t played on a team since. Crowell has been involved in the sport since a young age, as a player and a coach. “Part of what I enjoy about [softball] is that I’ve been doing it for a long time. I’ve lived in Minnesota for five years, and I haven’t had a team to play on,” she stated, “there’s just something about playing on a team sport, being physically active, and getting to know people in a new setting. That’s what I’ve enjoyed most about playing on the staff softball league.”

South was quite successful on the field during this season, winning five games in as many weeks. Yet Panning-Miller insisted, “it’s a social thing, [it’s] not so competitive.” Loichle commented that one of the things she enjoyed about playing on the team was the atmosphere at the game. “One of the pluses is people would bring their kids,” she stated, “it’s just a fun environment.”

Both music teacher Scott Carter and Crowell agree that math teacher Don Winnes is the most valuable player of South’s team. “He’s had a few minor injuries, but has still made it to every game and has had some really impressive plays in terms of fielding and batting,” said Crowell. Loichle thinks that math teacher Kip Krasean should win the honor, saying that it is because “he has mad skills on left field, and he bats like [Justin] Morneau.” However, Winnes and Krasean are not the only softball superstars at South. According to Panning-Miller, many of the South High staff members are very talented on the softball field. “There are people of all different skill levels on the teams,” he said, “there are people that are very good, [and it] turns out that most of them are from South.”