Drawing the line between sports bonding and hazing 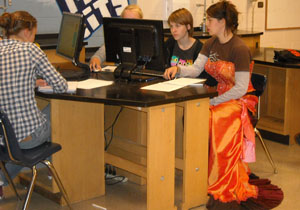 Some traditions define South’s community, but where is the line drawn between sports team bonding and hazing?

In past years, several South sports, including volleyball, softball, and women’s soccer, have held an event known as initiation in which returning players visit the homes of new varsity team members early in the morning, dress them in unique outfits, and take them out to breakfast. This year, however, the women’s varsity soccer team was prohibited from holding this event,”an affectionate right of passage onto the team,” said soccer captain Rebekah Smith, a senior.

According to Athletic Director Mark Sanders, the cancellation of the tradition came out of concern for the comfort and safety of those participating. “The definition of hazing is very broad and we want to make sure that we do everything possible to make everybody feel comfortable,” he said, “because if there’s one person who is uncomfortable, it can be considered hazing.”

Sanders commented that any event that makes people uncomfortable could be considered hazing. “A surprise birthday party could be considered hazing. It’s putting a person in a position where they could feel foolish,” he said, “they may say they’re okay with it, but deep inside they may not feel comfortable with it. But they’re afraid to say anything with the peer pressure…so we eliminate it.”

Recently at John Marshall High School in Rochester, Minnesota, there was an incident of alleged hazing. According to Dan O’Neil, chair of the Rochester School Board, during homecoming week in late September, upperclassmen asked underclassmen to dress in a certain way. If they did not comply, the older students threw food and trash at them. While sports initiation at South is in no way as extreme as this incident, putting clothes on someone in a way that would make them feel uncomfortable is considered hazing, according to Sanders. Despite this, Sanders does not consider hazing to be a huge problem at South. “I don’t think it’s a problem now. I’ve tried to let my coaches know that these things are not acceptable,” he said.

Some student athletes, on the other hand, don’t seem to consider sports initiation to be a form of hazing. “It’s not hazing, it’s voluntary,” said senior volleyball player Madison Hallman. “They called my parents to pre-approve.” Although veteran volleyball players called parents and guardians to pre-approve the event, the official Minneapolis Public Schools policy on hazing states that, “apparent permission or consent by a person being hazed does not lessen the prohibitions contained in this policy.”

Junior and volleyball player Katie Mullin, however, said that, in her opinion, initiation is hazing, but it doesn’t have any harmful connotations. “It is hazing but it’s all in good fun,” she stated, “you know that it’s safe because it’s with the teammates you’ve been playing with, and you can trust them so you know that you won’t get physically hurt.”

Freshman soccer player Eleanor Noble says that although she didn’t have initiation into varsity soccer, she doesn’t feel like she missed out. “I feel like it would have been fun,” she said, “I don’t think I missed out because everyone is nice and accepting.”

Regarding the cancellation of initiation into women’s varsity soccer, Sanders stated that “we’re not trying to take the fun away from the sport, we’re trying to protect people.”