According to South High athletic director Mark Sanders and various players, the merger was formed because of the shrinking number of players in Minneapolis youth hockey programs. Also, top players from the Bantam hockey program, a club for players ages 13-14, were choosing to attend private schools. With fewer and fewer players trying out, the Minneapolis hockey clubs felt that they needed to create one team in order to be competitive. 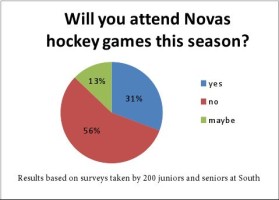 South senior Jack Kelly, who was a member of Minneapolis East, said that the merger will affect attendance because “the bleachers were almost full” whenever East played West. South senior Alec Kelly, another former member of Minneapolis East, also thinks the rivalry will be affected, saying, “In the previous years the kids from South supported East and the kids from Southwest supported West.”

Both Jack Kelly and Alec Kelly, along with teammate Tony Pnewski, a sophomore, support the merger.  Alec Kelly said, “It will make the team a whole lot better.” Also, having only one Minneapolis team “brings together the whole city,” commented Jack Kelly.

The new name for the Minneapolis team was chosen to be the Novas. The athletic directors agreed on this name because it is also the name of the Minneapolis girls’ hockey team. “We wanted to keep it consistent,” said Sanders. Pnewski agreed, adding, “The reason [that the Novas was chosen] is that we did not want to choose a biased name.”

The hiring of a new head coach is another big change in the Minneapolis boys’ high school hockey program. Shawn Reid was selected to coach the team, despite never coaching in Minneapolis before. After his 1998 graduation from Gustavus Adolphus College, where he played hockey, Reid went on to have various high school and college hockey coaching jobs. Before coming to Minneapolis this year, he was the head boys’ varsity hockey coach at St. Mark’s School in Southborough, MA.

As Sanders put it, Reid was picked because “he has the qualifications and skills to be a good coach.” Jack Kelly agreed, saying, “I think he was really qualified and has a lot of experience and he is young.” According to mnhockeyhub.com, Bill Ross and Tom Younghans, who were the head coaches for the Minneapolis East and West programs last season, were candidates for the head coaching job.

With the season already in progress, rivals will now have to play together as teammates. As winter draws nearer, players and fans hope to have a lot to cheer about this hockey season.