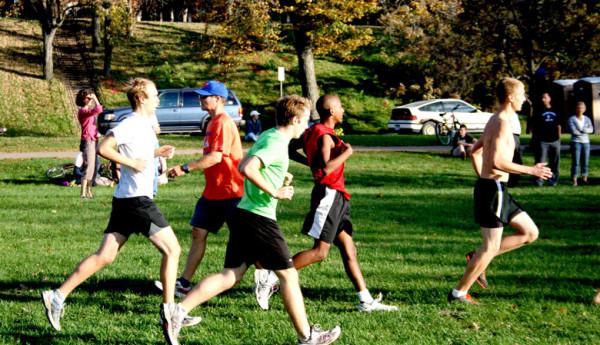 Members of the cross country running team participate in the Miller Relays on October 12.

There are the sounds of teammates, coaches, fans, and parents cheering on the competitors. There are the sights of sweaty, determined, and hardworking runners. They are trying their hardest to get a faster race time or maintain a previous time.

The cross-country running season is coming to an end and the South team is getting ready for the city championships on Tuesday, October 19. The runners and coaches are hoping to win city back this year from Southwest. Southwest has always been one of South’s biggest rivals in all aspects, but the rivalry is most visible in athletics.

“Southwest is the only other [cross-country running] team that has a full varsity,” said senior Temesgen Fekadu. “Last year we lost city to them; it was a huge disappointment.”

Coach Mark Gross commented that this year, “They [Southwest] are dead-even with us”  meet- and score-wise. He added, “It should be really exciting to see who wins.” Gross has co-coached the South cross-country running team for 6 years with Calvin Alvarez.

Along with succeeding well as a team, South has also had some successful individual runners. Hassan Mead, Alex Ciesielski, Bronte Metzger, and Robel Kebede are just a few graduates who have contributed to South’s history of success. Along with the absence of these star runners, this season’s team has also lost Clara Schultz to an injury. Last year, Schultz was the 2nd place runner in the city conference.

With so many changes in this year’s team, some may be wondering how they compare to last year’s. “We are definitely better than last year because the team is more unified, everybody knows each other better, we are closer and we know where each other is at [athletically],” Fekadu said. It is no surprise that there is a direct correlation between working well together and feeling comfortable around each other.

When asked what their personal goals were for the rest of the season, many athletes’ responses were similar. Fekadu said, “I want to pull off winning city against Southwest and make it to state.” Junior captain Jenna Birkeli added, “I want to try to make it to state and I think we are already almost there.”

The state competition will be held on November 7 at St. Olaf College in St. Paul, Minnesota. Winning state this year would mean winning for the first time in twenty-two years.

In addition to the many competitive runners, one athlete is doing something special this year. Junior Sally Donovan is on both the women’s varsity soccer and the cross-country running teams; both are fall sports. The opportunity to participate in both sports is something positive for Donovan.

“I’ve played soccer my whole life,” said Donovan. While soccer has always been a passion of Donovan’s, her love for running was discovered during her sophomore year. Her love for both sports made choosing between them impossible.

Of course, much stress comes with playing two sports and having homework daily. Donovan has soccer practice every day after school. As a part-time runner, she ran three meets this season, just enough to qualify for city and sectionals.

Playing two sports in one season is not something Donovan recommends for everyone. “If it’s really hard to decide between two sports, go for it,” said Donovan. “Otherwise, try and commit to one sport.”

With the soccer season over, Donovan will be running full-time. “I don’t train for cross country, I run just enough to qualify for the season,” she added.

Birkeli, a captain for the team this year, said she really likes being a part of decision-making and helping to motivate her team members. As the season comes to an end, Birkeli commented, “[Being a captain] can be hard and stressful at times, but I’m optimistic about where the season is going and can’t wait to win back city.”