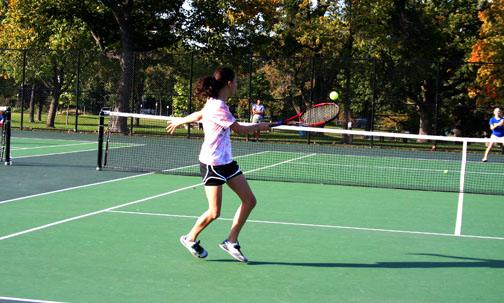 A JV player takes a swing during a match against Wayzata.

To an outsider, the South Women’s Tennis team may appear to be separated. This could be because the varsity and junior varsity teams practice and compete in different locations and there are different captains for both teams. Whatever the reason for the apparent separation, it seems to be very noticeable among team members.

Freshman Payton Gerick observes about the varsity team, “They’re nice to us, they don’t act superior.” She adds about the detachment of the team, “We don’t practice together, we don’t ever have games together.”

Coach Alex Berry is in favor of the current arrangement, emphasizing that the varsity squad approaches matches more competitively, where as JV strives to create a positive environment of support for the team. Thus, the separation is beneficial to each teams’ goals.

This system proves to be effective according to many team members as well. Senior Aine Miller, a JV captain, supports the separation stating, “We feel like a lot of the time we get clumped together with varsity, and we do just as much work but don’t get the credit.” JV player and junior Greta Regan includes, “It’s good because it gives us a chance to have our own spotlight.”

Part of the reason for the separation between the two teams is the inflation of JV players this year. According to one JV player, there are around 30 players on the JV team this year, compared to another JV player’s estimation of 15 or 20 players on last year’s roster. The addition of ten more players has made practice space more crowded, one reason for the separation of the two teams.

When asked why the sudden increase in JV players,  junior Eva Mitchell speculated that “word spread that it was just fun.” On her reason for joining, Gerick shares, “I figured it would be a good way to meet people before school started.”

Despite any separation between more and less experienced players, expectations for the tennis team remain high. A goal is to do well this year at sectionals, according to senior Rasheeda Lacy, one of the varsity captains. Lacy said that things are looking up because the team is “a lot more organized this year.” Junior Annie Pudvah, another varsity captain, mentioned that this season they are trying to “make [Women’s Tennis] more of a strong program and work together better as a team.” It seems as if they are accomplishing this goal so far, with the women’s tennis team remaining a competitive program at South.