Paying for college, inequity, and generational wealth: Why merit scholarships have to go 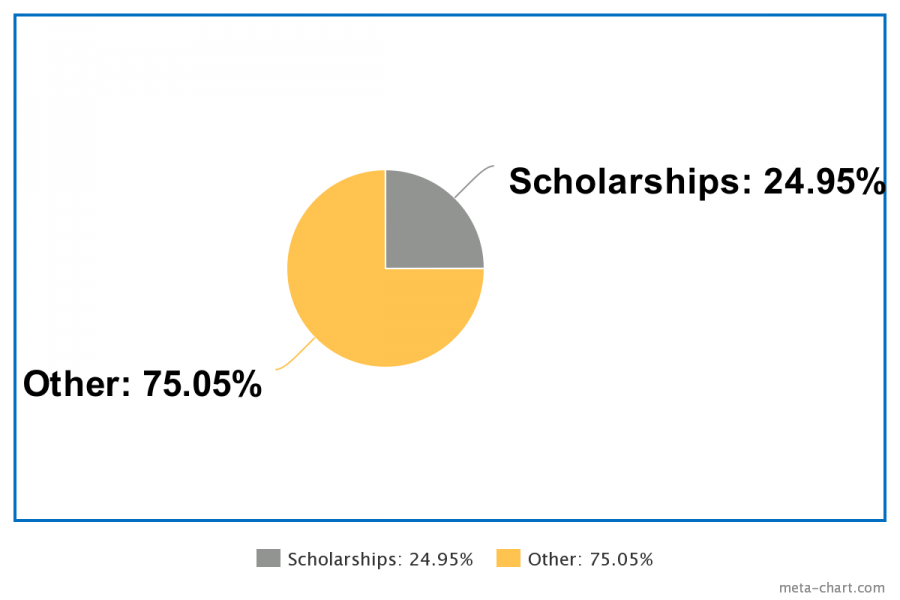 How much of college tuition is paid with scholarships versus other sources. Data from educationdata.org

How does someone unable to afford college pay for college? Scholarships are, for many, part of the broader solution. However, some of these scholarships end up reinforcing generational wealth, making it easier for wealthy applicants and harder for poorer ones. The truth is, merit scholarships shouldn’t exist. But that might be impossible.

A scholarship is a sum of money that goes to your college tuition and/or fees that do not need to be paid back, unlike a loan. According to EducationData.org, 76.7% of full time undergraduate students receive a grant or scholarship that helps them pay for school. These scholarships and grants come based in either need, where families that make an income under a certain threshold are granted a scholarship, or in merit, where a scholarship is rewarded for academic or athletic achievement. And while both may seem good, the latter is used by schools that may not be able to compete academically with A-tier institutions such as ivy league or similar schools to get the “smartest” students. Because so many students with high test scores and good grades receive these reduced costs of tuition from schools, it raises the tuition for people that don’t get them.

While this may not seem incredibly harmful at the moment, and could even incentivize working harder in school, countless amounts of studies and data point towards a trend of students with wealthier backgrounds getting higher grades and better test scores as well as access to a lot more opportunities. These students can do more extracurriculars after school because their families do not need them to spend that time working in order to pay the bills. They can hire tutors and purchase test prep materials, and possibly most importantly are more likely to live in more wealthy neighborhoods that have better, well-funded schools. On the flip side, many less wealthy students do not have these privileges or opportunities. For these reasons, many merit scholarships go to wealthier students that need them far less than some of their peers.

People with degrees are more likely to get higher-paying jobs, and make more money in the long run. This means their kids are more likely to get a better education, get test prep, and already have legacy and help at home. They end up being more likely to get merit scholarships and being able to go to college, and thus the cycle reproduces. While the school’s money is going to these students, less wealthy students, and especially first generation students, are left out. Wealthy families get into college and leave it with less debt, are able to pay it off quickly and accumulate wealth in order to fund the next generation. This is how the system of merit competition between schools reinforces generational wealth. It gives money to the people that don’t need it as much and takes it from the people that really do.

Switching to a need-based-scholarship-only system would do a lot of beneficial things. First of all, it would nearly completely eliminate the issues presented in this article. Wealthier students would still be more likely to get into college than others, but less wealthy students would get far more money in need of aid. Secondly, this would force colleges to compete on other things like academics, activities, and others. This competition would encourage innovation in these schools to be efficient and highly academic.

With many schools switching to a no-test-scores-required policy, eliminating a part of the college application that is proven to be extremely biased towards richer students, it’s prime time for more change to make college more equitable. Going forward, the next step is to completely eliminate merit aid. If we are committed to a brighter future, it shouldn’t exist.