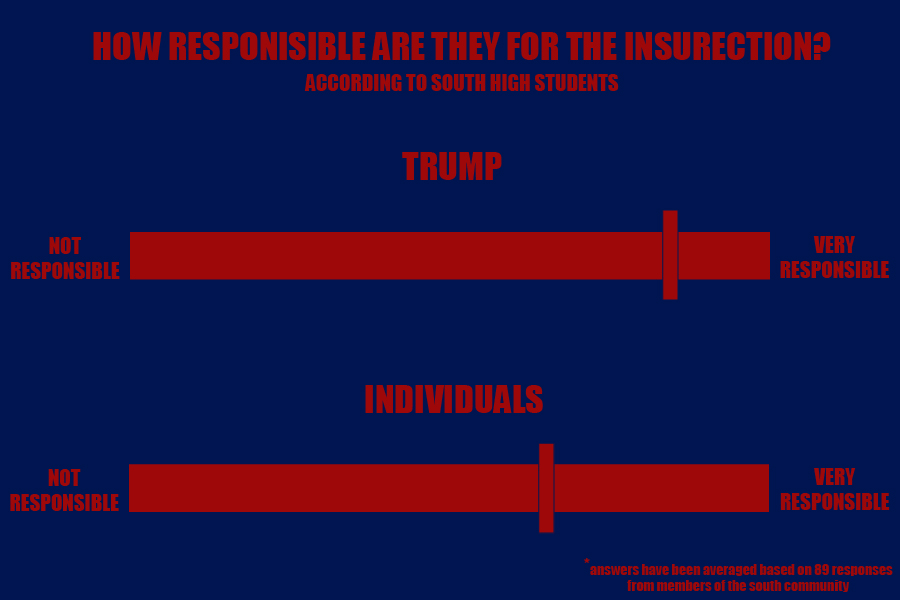 Members of the South community were polled on how much they believe in the responsibility of Trump versus individuals for the insurrection. The 89 individuals polled averaged a higher belief in Trump’s responsibility than individual action. However, Trump faces no consequences for his incitement of violence at the capitol. “I don’t think it should be pardoned. I do think it was treason. I think it was hateful and disgusting, and disheartening,” said sophomore English teacher Ms. Hodge.

On January 6th, hundreds of die-hard Trump Supporters stormed the capitol. They bypassed security and walked the halls of the capitol, screaming allegations of election fraud, and chanting their support for Trump. As the nation tried to grapple with the effects of a direct breach to our democracy, allegations of Trump inciting these mobs were taken to the senate, yet Trump was not convicted for the insurrection’s incitement. Unfortunately, this insufficient response to the attacks and violence was largely expected as it follows the narrative that has accepted Trump’s ludicrous actions throughout his presidency.

It has been frustrating to see the modest response to the events on January 6th, and how the moderate response in its aftermath continued to follow suit with the manner in which the United States deals with actions of white supremacists. Everything from the police response to the recent conclusion drawn that Trump is not responsible for inciting the insurrection is reminiscent of deep rooted American values. This country continues to defend the actions of extremists while oppressing minorities for distinctly less drastic occurrences. This reality of American values is what allowed Trump to be put into office, yet still four years after Trump got elected, it is not the system that elected him or Trump himself that is being blamed. Instead, the country casually continues to believe the notion that it’s simply a few extremists who are the problem.

Four years ago, it would seem unfathomable to most Americans that something like this could happen in our country, but after the discordant occurrences during Trump’s presidency, it takes much more to surprise the American people.  “I think I want to say I was surprised, but it’s just an extension of the stuff that’s been going on for so long,” said senior Lucas Nerbonne.

It would be naive of politicians and frankly anyone following the news to say that this violent of an attack on our nation’s democracy hasn’t been brewing for years. Trump repeatedly encouraged belief in the fraudulence of the election along with other far-fetched conspiracy theories throughout his presidency that his supporters still adamantly hold on to.

Our nation has been in a fragile state for years yet the causes of the insurrection are far from unamerican. Trump and his followers are reminiscent of deep rooted divisions and hatred toward minorities that were instrumental in the foundation of this country. It has taken repeated harsh incidents in order for the inherent racism of the United States to become visible for those who don’t directly experience it. Jeannine Erickson, manager of the writer’s room said, “[People have been saying] ‘this is not the America I know’, and I think ‘maybe not for you. This is the America I am very familiar with.’”

Trump’s blatantly racist beliefs have been permitted as he hides behind the mask of patriotism, claiming to want the best for the country. The systems of power that allow these actions were built upon the same racism, perpetuating a reality of inequality that seems beyond repair. We need to deeply analyze what our country was founded upon in order to understand how Trump’s direct incitement of a terrorist act was excusable. This information must then be put to use to reconstruct these systems in a just manner.

January 6th could appropriately be deemed a culmination of Trump’s time in office, and was thus an emotional day for many people. It brought to light the thinly veiled agendas of not only the former president, but of his supporters. “It all felt very much like the last four years of craziness in the country coming to a head,” said Nerbonne.

“I felt sad, I felt punched in the feelings, I felt heartbreak… Trump has grossly highlighted the inequities through his rhetoric, through his his hateful language, his inciting of terrorism,” said english teacher, Tanya Hodge.

The recent impeachment trials questioned Trump’s role in the insurrection and how much he was to blame for this attack, or whether his supporters, radical extremists did these things with no incitement from Trump.

In republican’s arguments they often state that Trump did call off the terrorists. However, his tweet from two hours after the initial storming still showed partial encouragement of their actions. “This was a fraudulent election but we can’t play into the hands of these people… so go home, we love you. You’re very special… I know how you feel, but go home and go home in peace.”

His sole action to ‘call off the terrorists’ was a tweet two hours after the beginning of the insurrection, an ambiguous message that Trump understood the desires of the terrorists, but ‘discouraged’ them in order to shield himself from blame.

“Trump has always been a boundary pusher. It’s how he got elected, it’s how he governed and so when he stopped caring about the norms, and the politeness that Washington is full of, it really let him do whatever he wanted,” said Nerbonne.

The insurrection has shown us that the severe increase in far right propaganda during Trump’s presidency allowed the most violent displays of blatant white-supremacy to occur without appropriate consequences in the case that the acts aren’t simply excused without concern. Trump’s attitude and behavior throughout his time in office allowed right winged individuals to hold onto and justify their problematic and bigoted views.

“[Politicians] are humans, capable of error just like anybody else and the second you idolize them and turn them into these gods is the second you not only have failed yourself, but the democracy you claim to care so much about,” Erickson said.

Since President Biden has been in office, many Americans want to pretend the systemic racism that founded our country is no longer as pressing an issue, yet it is still very much present, despite the fact that the president may no longer be directly exemplifying it. We need to ask ourselves who we are as a nation. The problems that became increasingly evident during Trump’s term will not simply be solved with a new cabinet.

“I think it’s important we recognize the fact that even as Biden and Kamala Harris [are now in office], that does not mean that the work is done or that they will fix our problems, even though Kamala is a Black and South Asian woman. It’s our job as a people to hold them accountable and remind them of who we should be fighting for,” said Erickson.

It is hard to say what is to come in the next four years, though there is no denying the dangerous precedent that is set when a former president gets away with many impeachable acts without conviction.

“I hope that former President Trump’s inciting of an insurrection never becomes the model for the kind of behavior that is acceptable if your candidate loses. Trump’s lies and rhetoric that caused an insurrection is the antithesis of democracy,” said Hodge.