Mutual aid and its vitality during ongoing crisis 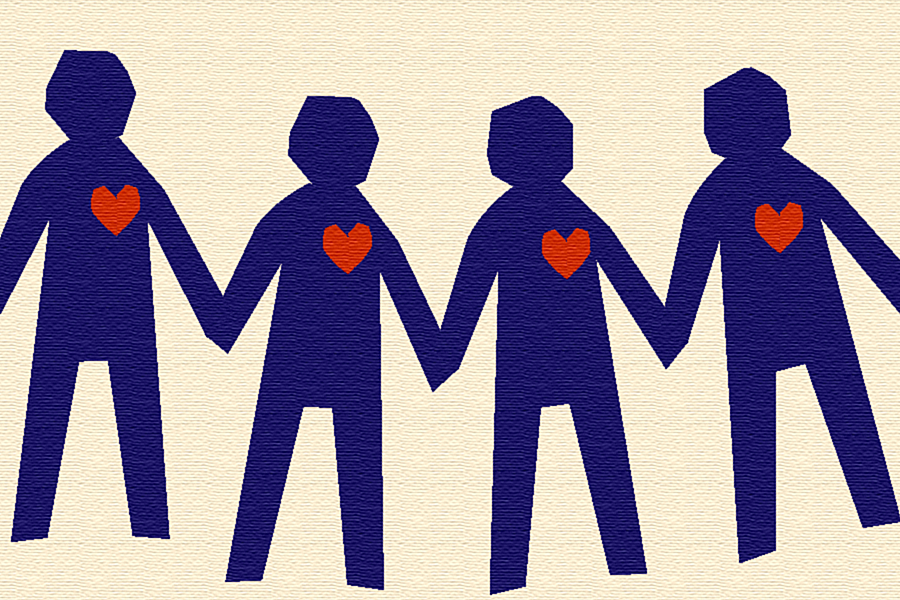 2020 has seen a significant uptick in mutual aid groups and grassroots mobilization, which has been essential to combating and navigating uniquely difficult times for disenfranchised populations. “Mutual aid is not charity. It’s not out of pity, it is the act of genuinely caring for the wellbeing of those around you,” said senior Olivia Sather.

In the midst of government neglect, unemployment, and economic downturn, many political movements have arisen in attempts to change the structure of a society that has utterly failed the people in the most dire need of its help. At the forefront of these movements lies a political strategy that differs from many others — a strategy for survival in the midst of government neglect, and a strategy meant to build counter-institutions to the state by and for the people. This phenomenon, of course, is mutual aid; a strategy of creating distributive organizations outside of the government, usually distributing needed resources like food, funds, and more to those in need.

The COVID-19 pandemic has led to higher unemployment rates, increased domestic violence, and mental illness problems in order to create a high risk environment for many people and families. These rises in tensions and economic pressures have led many people opting to seek financial aid outside of their immediate circle. A situation like the pandemic that has taken the world by storm is not familiar, nor is it comfortable, and it has forced many conversations and situations that are uncomfortable for many people. The paradoxical nature of this pandemic is that it facilitates a need for connection and communities of care, but makes communication and connection more difficult and unnatural than ever before. Mutual aid is a prominent form of community care–a way to connect with and financially support those around you who are struggling, whoever it may be. “Community care is vital. The state doesn’t care about poor people, disabled people, or people of color. We have to care for each other,” said senior Olivia Sather.

One of the most important storylines of this pandemic is that of the immense grief, fear, and trauma that has been forced upon BIPOC communities. Violations of Indigenous sovereignty, exacerbation of the poor economic conditions of Latinx families, rampant anti-Black violence, and extreme rises in anti-Asian hate crimes are some of the racial and ethnic stories that portray the unfair and unequal nature of the pandemic. Empirics conclude that marginalized/incarcerated people are bearing the brunt of this pandemic, and a radical distribution of resources, political energies, and more is necessary in response. As of January 24, the Department of Corrections has documented 3,876 COVID cases in Minnesota prisons – 3,600 have recovered, 286 have not, and 11 have died. And according to the CDC, POC have been diagnosed with COVID-19 at rates ranging from 1.4 to 1.8x higher than white people. When you look at hospitalizations, these statistics warrant further fear, with rates up to 4.1x higher. The statistics paint a story of one aspect og racial inequalities that have caused BIPOC communities to be hit hardest by these dark times. “Many black owned businesses are at risk of losing everything due to COVID. Shutdowns have affected Black business owners massively, and many times they are their only source of income” said freshman Mariah Parham, reflecting on another facet of the struggle for Black people during COVID-19.

During a time where state-sanctioned violence is at its highest and many racist groups have been empowered, not deterred, by state responses to ethnic divides, these mutual aid efforts have been a huge part of the necessary mobilization and response to the violent effect of the pandemic onto marginalized communities. “Trump has made racists comfortable in what they believe, and mobilizes racist groups. We have to mobilize against that to the same extent. We have to support each other,” said sophomore Cassidy Atheneos.

Examples of the effectiveness of mutual aid in assisting anti-racist efforts have been very common throughout this year. Some examples of mutual aid are bail funds that aim to protect protestors and others from wrongful incarceration, monetary support to individuals for medical bills, housing and other basic necessities, and programs seeking to help a specific community, among many others. One of the crucial roles of the project of mutual aid is creating roles in resistance for everyone, including those who may not be able-bodied and more. “Mutual aid has allowed protesters to be supplied with many needs. Homeless encampments were given access to resources needed to grow, and so much attention is being brought to the basic needs that have been ignored by the city”, said Sather. Mutual aid is key to inclusion in the project for a society built towards the needs of all.

Mutual aid is frequently compared to the work of non-profit organizations, however, this idea can be easily disputed by comparing the manner in which each movement supports oppressed peoples. Dean Spade, a law professor at the Seattle University School of Law whose work centers social justice made the differentiation that mutual aid is deprofessionalized, in contrast to the careerism and philanthropy of non-profit charity as well as the difference between the usage of ‘people-power’ to resist authority in mutual aid and the adherence to government regulations in non-profit organizations. Spade also focuses on the interconnected struggle inherent to mutual aid versus the single-issue unconnected focus of non-profit charities, and arguably the key difference being the fact that mutual aid strives to support those in need unconditionally, whereas non-profits abide by eligibility criteria that often divides candidates for aid into those who are “deserving” and “undeserving” of assistance. “Mutual aid is not charity. It’s not out of pity, it is the act of genuinely caring for the wellbeing of those around you,” said Sather.

The project of mutual aid has not gone uncovered during the COVID-19 crisis, with articles from many major outlets covering the topic. The importance of this movement cannot be understated–it is crucial to imagining a more just society, and a prerequisite to resistance to state power. The racism within government, wealth concentration in the hands of few, and other crises have made the violent nature of American governance clearer than ever. Imperialism, suppression of alternative political imaginations, and more has persisted throughout the existence of the US, and new figureheads such as Trump have made this clearer than ever. Mutual aid focuses on survival during violence, the radical reimagination of societal structures, and the necessity for counter-institutions to the state apparatus, namely alternatives that demonstrate that a better future is possible for those who have begun to lose hope. In situations like the COVID-19 pandemic, it is our imperative to support resistance strategies against state violence and we should celebrate the victories of grassroots organizations and mutual aid projects in creating safety nets for those in need during a time where the government has done more harm than good.