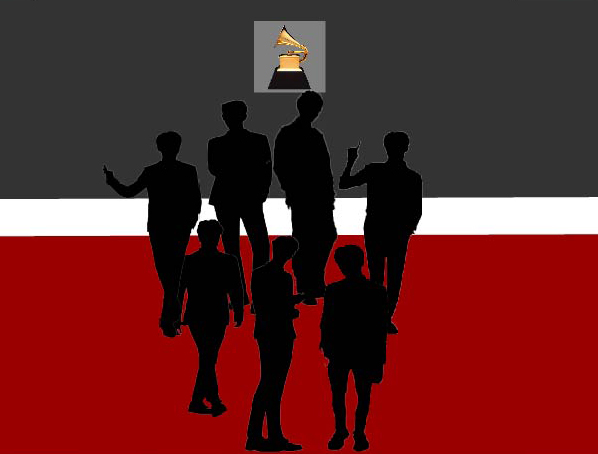 The 62nd Grammys took place on January 26th, 2020. The show featured an opening act performed by Lizzo, many tributes to the recently passed Kobe and Gianna Bryant, and Billie Eilish taking home many awards, including Record of the Year. While the show may have seemed complete and normal, something felt like it was missing, and that was international sensation BTS.

International sensation BTS just dropped a new album, Map of the Soul: 7.  The album, according to Forbes, sold over 4 million copies in preorders, and the total sales number has been increasing since itNadias release on February 21st, 2020.  The success of BTS is undeniable, but something feels like it is missing, and that is representation at the Grammys.

BTS is a record breaking Korean Pop (Kpop) group from Seoul, South Korea.  They sing, rap, dance, and have even given a speech at the UN, due to the huge impact they have had on the world.  The band debuted in 2013, and has released music about loving yourself, speaking yourself, and mental health. They have a huge fan base that calls themselves “ARMY” and some of their fans would surprise you, like John Cena and Camilla Cabello.  The band has seven members, RM, Suga, J-Hope, Jungkook, Jin, V, and Jimin.

BTS wasn’t entirely missing from the show, they got to perform at the Grammys, becoming the first Kpop group to do so. However, “performed” may not have been the best word to describe it.  The group mostly served as backup dancers during Lil Nas X’s performance, and only one member, RM, sang significant lines.

“They didn’t perform.  They sat on a couch and were allowed to sing like one line of a song.  If they were truly gonna be allowed to perform, they should have been allowed to [sing] one of their, you know, sold out songs that everyone seems to know… no, it was not a performance, it was kind of like a slap in the face,” said senior Nadia Gul.

Gul has felt a connection to BTS because their music speaks to her.  “I felt like their music really appealed to me, stuff that I felt like I wasn’t being understood for, they sung about it, and I felt like someone [got] me, someone knows what I was going through.”

Whether you think BTS got a real performance or not, the real reason it didn’t feel like they were present was because they weren’t nominated for any Grammys, despite their 2019 album, Map of the Soul: Persona selling 3.2 million copies… in the first month (according to Billboard).  They were the first artist to reach that number worldwide in 2019. That means they beat Ariana Grande, they beat Billie Eilish, they beat everyone else to that mark, and they were the group that wasn’t nominated for a Grammy.

“I think they deserve recognition because there is so much to what they do, and everything they do has a meaning behind it because all of the concepts they have in their music [contribute to] a very positive vibe, and that needs to be recognized and appreciated,”  said sophomore and BTS fan Betsy Warren.

So why is it that BTS hasn’t gotten the recognition that they deserve?  “They are a non-white artist that refuse to sing in a language that most of their members don’t even know…  and like any ‘acclaimed’ award ceremony [in the US], if you don’t speak English you [aren’t invited] on our stage,” said Gul.

It is obvious that BTS mostly sings in Korean, and so their music wouldn’t be considered as “American music.”  Yet, despite the language barrier, BTS has been able to connect with many people all around the world. So I think it’s unfair that BTS wasn’t nominated for a grammy, or allowed to perform on the Grammy stage.

The truth is, the type of music that wins awards in America is music by white, American artists that are appealing to white American listeners. And when a lot of the work that wins is solid music, there is a whole lot of other music that isn’t recognized because it isn’t appealing to that mass.  And that isn’t fair, because the Grammys should be about what music sounds good to everybody, and what music represents everybody, not what music is good and represents a select few.

And it isn’t just at the Grammys that BTS hasn’t been recognized at, they aren’t taken seriously by people unfamiliar with their work because of some of their fans.  When you think of Kpop, or boy bands in general, you immediately think of those crazy fans who know all the lyrics to every song and are always obsessing over the group.  And some of that is valid, BTS has had trouble with crazy fans, including stalkers. But that’s not a reason for them to lose credibility as an artist.

BTS isn’t the only group who hasn’t gotten recognition. Other great, foreign, and non-white artists haven’t been recognized by the Grammys as well.  “J Balvin, he is an amazing artist, and he doesn’t get recognition because he doesn’t sing in English, so he doesn’t apparently deserve any claim of recognition,”  said Gul.

What the Grammys don’t seem to understand is that music influences people, no matter what language it’s in.  Music is still credible, still great, even if it’s in Spanish or Korean or any other language.

And so to me, that makes BTS and other foreign artists credible, and worthy of at least a Grammy nomination.  Because while BTS may not make standard American music, they are still good.  They are great dancers. They are great singers and rappers, and they write and choreograph a large amount of their work.  That is something that award winning American artists don’t always do, and so I believe BTS deserves at least a chance.

So I hope that in the future, the Grammys and other awards organizations can put all biases aside and maybe translate those lyrics to see why they are so amazing.  It is time for the Academy to recognize music for how wonderful it is, not how well it fits into the traditional American mold for what music should sound like.