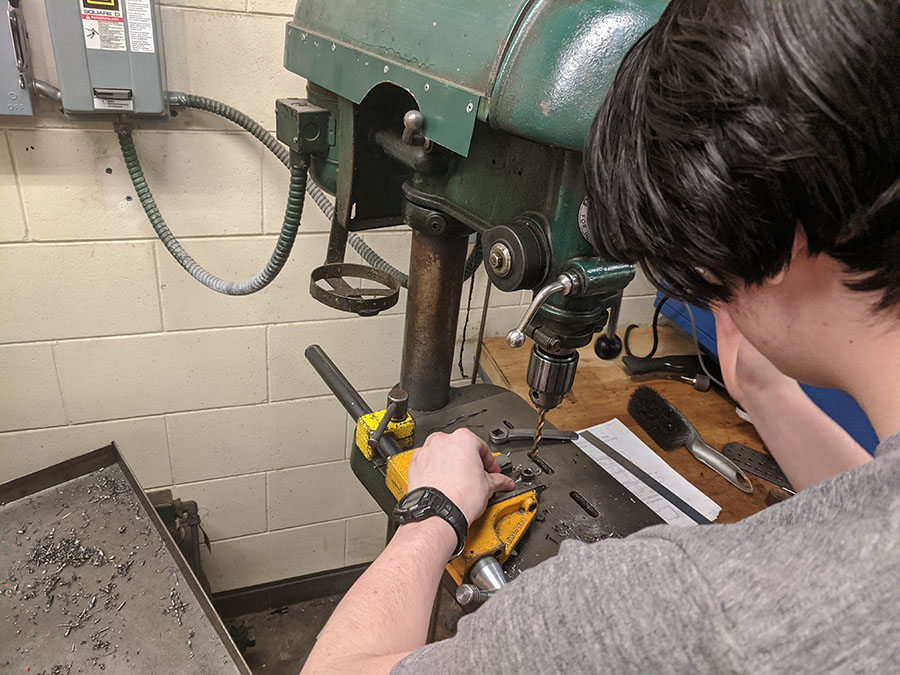 Pictured above is sophomore Jonathan Auckenthaler working on his ball peen hammer, the final project for machine shop. Machine shop is the only technical class South offers, despite just being one out of the hundreds of trades available.

There is a wide variety of viable post secondary options. Whether you want to further your education or head right into the workforce, no productive option is necessarily a bad option. Among these options are pursuing trades, whether by learning through vocational school or apprenticeships, there is money to be made in blue collar labor.

Less and less students are developing interests in trades. Many don’t even think about the possibility. A study by Deloitte revealed that the declining trades industry will leave 2.4 million positions unfilled from 2018-2028, worth nearly $2.5 trillion of pay.

“We all need construction workers to build bridges and houses, manufacturers to manufacture our cell phones, we need people to come and fix our plumbing and painters to paint,” said machine shop teacher Joe Hyser. “[Trades] account for about 30% of our nation’s GDP.”

Many trades have nationwide unions with high starting wages, excellent healthcare, and retirement contributions. Most technical colleges will land you with a degree in only two years, or a certification in even less time.

Pursuing a post secondary education isn’t cheap and most who do end up in considerable debt. While the same can be said for vocational school, graduates often end up in significantly less debt, and find almost immediate employment upon graduation.

At South it seems as if college is an expectation. While most other high schools offer a handful of technical classes (automotive, woodworking, etc.), South has only one. I love machine shop. It’s one of the biggest things that motivated me to consider going into a trade. But machining is only one of the hundreds of technical careers available, which could potentially discourage students if it’s the only experience they’ll ever have with a trade and don’t enjoy it.

South has a plethora of classes, including wide variety of AP and CIS classes. It is an atrocity that we only offer one class that is a part of a non-college related career.

“[Student’s don’t pursue trades] because South doesn’t advertise it as an option,” said junior Skyler Cronin, who is planning on going into a carpentry apprenticeship. “Schools tell you ‘you need to go to college’ and that’s the end of it. That’s why the ACT is so big and we have so many AP classes. If there was more exposure to trades we would have a lot more students looking at them.”

South has a lot of resources for students planning to pursue college. The College and Career Center, Project Success, PSEO, but the idea of anything besides college isn’t really touched on. Sure, it is briefly mentioned, but students aren’t advised in the process of applying to vocational school or finding apprenticeships.

“America has heavily ingrained itself in pursuing a college education because it funds capitalism because there’s an *ss-load of money you pay to go to college, but what’s that for?” said senior Leon Wong, who wants to be an electrician. “Nowadays you’re not even ensured a job [with a college degree].”

The New York Federal Reserve Bank released a report in November showing that recent college graduates (ages 22-27) are more likely to be unemployed or underemployed compared to overall workers.

There is money to be made in the trades for young people willing to work. Starting wages are upwards of $20 with full benefits, matching retirement savings, unions, and really good insurance (being that these jobs are usually very physical). And most of the jobs are secure, because we are always gonna need these careers.

“When you can be 19 years old, have your 2 year certification and start out at $30/hr, that says a lot,” said Hyser. “We have people in the trades that are buying their own house at 24. That’s what we used to call ‘The American Dream’ which has now become ‘The American Fantasy.”

We need a district level change. Students are being conned into hundreds of thousands of dollars of debt because of the nation-wide expectation of college. The Washington Post revealed that only 27% of college grads have a career that relates to their major.

Students leave high school, go to college due to a lack of direction, buy an education with a useless degree, and suffer for the next many years of their lives for it while possibly just working for minimum wage.

We demand exposure. We need more technical classes, and exponentially more information given. It is wrong to hide these options from us. We require the means to pursue a better life, and only being exposed to half of our options is an outrage.