Saying that mental illnesses are invalid contributes to worsening mental health in adolescents: The truth according to my experience. 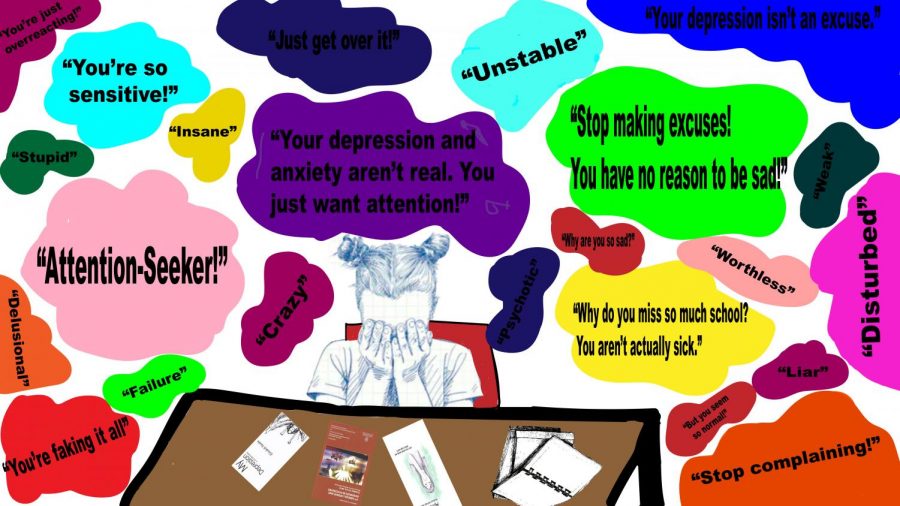 Those dealing with mental health conditions hear invalidating statements in response to opening up about their feelings everyday, resulting in the perpetuation of the stigma surrounding mental illnesses. “The problem of "underreporting"—that is, not fully communicating, or even recognizing, your symptoms—is often caused by stigma and its malicious cousins: negative self-talk, fear of being labeled as crazy, embarrassment. So people stay quiet, preventing them from getting the treatment they need,” stated Maria Yagoda, a staff writer for Vice.

*Trigger warning: Suicidal ideation and self harm are mentioned in this article. If you believe this will trigger you, please don’t read! I want the best for your health and I certainly don’t want this article to contribute to the worsening of your condition. *

If you deal with any form of mental illness, it is likely that you’ve heard people disregard your condition as mere attention seeking or flagrant defiance. The belief that mental illness is not truly a health condition is extremely debilitating and may be contributing to the rise in suicide rates amongst teenagers.

The stigma that has been created surrounding mental health conditions perpetuates a toxic and disabling culture for those dealing with mental illness, and as such must be dismantled.

Hearing phrases such as, “Stop making excuses,” “you have no reason to be sad,” “stop whining!” and “just get over it” are commonplace for anyone who lives with mental illness. These phrases create the  stigma surrounding mental health throughout the world, and can be the catalyst for worsening or perpetuating this stigma.

This stigma devalues the heart-wrenching and havoc-wreaking experiences of some of the most vulnerable members of society. In not acknowledging the arduous struggle people face while dealing with mental illness, society is blatantly ignoring life or death situations.

Acknowledging that someone’s thoughts, experiences and emotions are valid is important to the health and quality of life of hundreds of millions of people around the globe.

Hearing things that devalue your experience when you are at your most vulnerable worsens your feelings about yourself and your outlook about continuing to live.

“If someone at rock bottom hears [this] about themselves, after they’ve plucked up the courage to disclose what they’re going through, it can send them spiraling into further isolation and their thought patterns spiraling down life-threatening avenues,” said the mental health organization, Time to Change.

Many times in my life, I have been too afraid to express how my depression and anxiety were truly affecting me. I would simply say, “I’m too tired” or “I can’t do this” in attempts to express to my loved ones that I was extremely depressed and having thoughts about ending my life.

In these untruthful statements, I was often met with the response of “just get over yourself” or “stop whining”, or even “Fine, just fail. I’m done trying to help you.” Although I love those close to me to no end, these insensitive statements ripped at a wound that was already extremely raw–I was scared to express my true sentiments in the first place because I knew I would be met by these responses, even when using cop-out statements such as “I’m tired.”

This inability to be open with those closest to me is a byproduct of stigma. Throughout my life, I have been too afraid to voice what was truly going on, for fear that I would be judged as lazy, crazy or attention seeking.

This fear of seeking help because of societies judgements is a problem  for millions of people who live with mental health conditions. “The problem of “underreporting”—that is, not fully communicating, or even recognizing, your symptoms—is often caused by stigma and its malicious cousins: negative self-talk, fear of being labeled as crazy, embarrassment. So people stay quiet, preventing them from getting the treatment they need,” stated Maria Yagoda, a staff writer for Vice.

I have even struggled to tell the complete truth to my closest friends, not wanting them to constantly worry about me or bear a burden because of me. Whenever I meet new people, I am extremely hesitant to open up and tell them that I have Major Depressive Disorder and Generalized Anxiety Disorder. Even to the people I have received remarkable support from, I continue to have the undying need to apologize profusely when I bring my problems to them.

This stems from the belief that mental illnesses are not truly illnesses. Due to this, I have struggled with believing that my depression and anxiety affect me just as much as having a “traditional” illness. Additionally, I am often unable to accept that those of whom have offered me profound support are in agreement that my mental illness is a valid health condition.

Discrimination based on ones differences in mental functioning or physical abilities is completely and wholly disgusting. Those that head our society have hidden away the truth of being human, masking the trials and tribulations that come with this life–attributing them to the malfeasance of those deemed mentally impaired.

Stigma also manifests itself in the psychiatry-based realm of mental illness. There are many conflicting views surrounding the long-term use of antidepressants and antipsychotics. The “pull up your bootstraps” mentality in America perpetuates the belief that depression is just a fad, and that one needs to do more yoga and self care to surmount their mental illness, rather than the scientifically proven method of taking medications and going to therapy.

“Often, anti-medication stigma manifests in the form of what that same study calls “therapeutic pessimism.” Research consistently demonstrates that healthcare providers tend to hold pessimistic views about the reality and likelihood of recovery, which is experienced as a source of stigma and a barrier to recovery for people seeking help for mental illnesses,” stated Yagoda.

She continued, “Why would you prescribe medication for a condition that seems impossible to control? And if you’re skeptical about treatability, wouldn’t proposed prescriptions feel a bit like nonsense?…‘Anticipated stigma from healthcare providers’ is a major factor in people’s reluctance to seek help for their mental illnesses.”

I have always known that mental illness has been a part of my life– depression and anxiety runs in my family, and I have consistently struggled with chronic anxiety. It wasn’t until I experienced the toxicity of middle school culture that my symptoms of depression began to manifest themselves. This isn’t to say that my depression is merely a made-up byproduct because of how society made me feel, but rather that society further worsened my mental health and demeaned me in doing so.

Although I have never consciously pondered the ways in which society’s stigma surrounding mental health has affected me, I can easily recognize how it has contributed to the worsening of my self-image and will to live.

In my freshman year in high school, I began to notice how my depression was affecting my drive and social interactions. Ever since 6th grade, I have never felt as though I fit in or was accepted by a certain group of people. I used my mental health as a self-justifying excuse to isolate myself and become the person no one ever thinks about or talks to. Although, at this time I still possessed the ability to power through, find the joys in life, and produce some of my most profound academic work.

I first experienced the phenomenon of suicidal ideation in January of 2019, albeit passive and with no intent. I can remember how I sat at my grandparents house doing homework, and experiencing my first inkling of what was to come.

This only got worse as the summer came. During my trip to Southeast Asia. I thought, ‘If I’m going to do it, 8400 miles away from home is the perfect place.’ However, this trip turned out to be the single-best experience of my life. I got closer to the three of the most awe-inspiring teachers of whom I look up to everyday, made close connections with several of my peers, and experienced the vivacious cultures of Southeast Asia.

When viewing these parts of my life from the stigmatized point of view, one would ask ‘What has she got to be sad about? Look at all these amazing things that she gets to do!”

And that’s just it. The stigma tells you that you are faking, that you are seeking attention, that you have nothing better to do so you are going to pretend you want to kill yourself.

This is exactly what perplexes me. How can this stigma be so widely accepted and believed when so many people tell these truths? How can one accept being so ignorant and invalidating to millions? I truly don’t understand how so many people can be misinformed, when so many people experience life or death situations due to mental illness everyday.

Solely attributing being suicidal to attention seeking is truly demeaning. This is the absolute least helpful thing to do when someone admits this to you. Validate them. Break through the stigma. They didn’t choose to live in this hell.

“When I hear the phrase “attention-seeking” used in relation to depression, it makes me laugh and makes me angry in equal parts. Do people really think I’ve devised this little world of hell for myself and decided to live in it just for the fun of it? That I choose to be a misery who can’t see the point in anything anymore? That I consciously throw away people and things and opportunities that mean a great deal to me because I just love to make life hard for myself?” said Time to Change.

However, you don’t get to choose to have depression. Nobody wants to have depression. I certainly didn’t choose to have thoughts of wanting to kill myself while walking around beautiful temples and artisan markets in Cambodia, nor did I wish to text my teachers at 11 o’clock at night expressing how weighed down I was because of this day, and how I didn’t wish to make their trip miserable.

Being situationally sad and oppositional is NOT depression. Stigma characterizes depression as such, and then has the audacity to tell those who are truly struggling that their condition is invalid and that they don’t matter.

This stigma has convinced me that I’m just lazy, or that my symptoms of depression and anxiety are character flaws. These beliefs have corrupted the minds of many, creating an extremely negative connotation surrounding mental health and seeking treatment.

“People feel shame about their psychiatric disorders, in part, because they’re exhibiting symptoms that are generally considered “bad,” like sadness, inattentiveness, and irritability. Unlike the symptoms of strep throat or the weird rash on your knee pits, symptoms of mental illness are as terrifying to talk about as they are difficult to identify,” said Yagoda.

In expressing your thoughts, emotions and mental health symptoms, you are helping to break this stigma. Through the efforts of those who experience the turmoil of mental illness, effective change will be made to dismantle this stigma. You are not alone. Keep fighting. We will do this together.

If you are struggling with thoughts of suicidal ideation, here are some resources.