We need to hold corporations accountable for the climate crisis 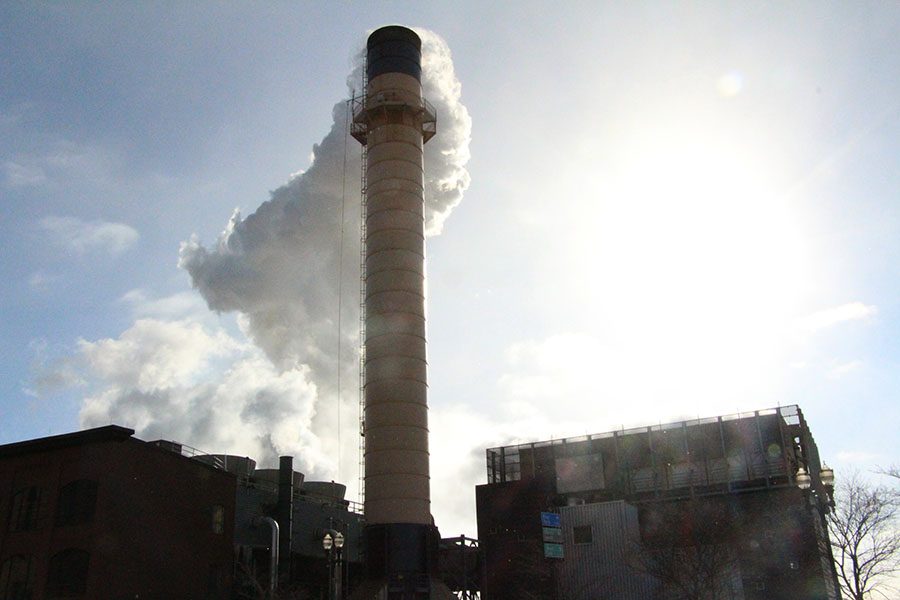 A smokestack releases smoke from a building. According to the non-profit CDP and the Climate Accountability Institute, 71% of global carbon emissions come from just 100 corporations. “(blaming average people for global warming) a really good way for people in power to not take responsibility.” Said Guille Bastian.

Recently a United Nations report stated that the world has 12 years to drastically lower carbon emissions or else we will face irreversible damage. Rising sea levels will result in the destruction of coastal metropolises like New York and Los Angeles. Hundreds of millions of people will be displaced and island nations could cease to exist. Massive famines and frequent forest fires will become commonplace.

Humanity is looking at a cataclysmic crisis the likes of which Earth has never faced that will result in the deaths of millions and a global decline that we may never recover from.

With all this talk of apocalypse, you are probably wondering what can be done. For me, searching for answers will usually just end suggestions to ride a bike everywhere you go, purchase and install solar panels on your house, or to buy a new car with eco-friendly standards.

Although a step in the right direction, these suggestions can be too expensive and time consuming for a lot of people, and even if you were to commit yourself to following these guides religiously in reality they wouldn’t be enough to save the planet.

But you shouldn’t have to feel guilty about this. According to non-profit CDP and the Climate Accountability Institute, 71% of global carbon emissions come from just 100 corporations. The entire weight of global warming does not rest on the backs of individuals.

Driving your car to work or forgetting to turn off your lights isn’t really what’s descending our planet into ruin, so don’t let yourself be blamed for corporate actions. As Guille Bastian, a sophomore grader said, “it’s a really good way for people in power to not take responsibility.”

Blaming individuals for the climate crisis is a strategy. If you’re focused entirely on your own actions instead of on preventing corporations’ free reign to release greenhouse gasses at alarming rates, then nothing will get done to put limitations and restrictions on them. “I think the [environmental] movement’s purposes are good except… [individual changes] could have been done years ago,” said Bastian. “I think right now we need bigger solutions passed by people in Congress.”

Although it may seem as if you have no influence on politics and corporate power as an individual, there is still plenty that can be done. “If the average person wants something done we have [to pressure politicians] ourselves” said Bastian.

These changes won’t come naturally through the political system unless the people demand them. You will have to get your hands dirty “protesting and organizing constantly” as Starr said. Rally and vote in support of politicians who will bring the climate change issues to the front.

Luckily, national groups are emerging with wide-scale solutions to climate change. For instance, the Sunrise Movement is a movement of young climate activists working to change the public view of climate change and get climate champions elected to office.

They recently launched a national “Green New Deal” led by Congresswoman Alexandria Ocasio-Cortez which would get the country to 100% renewable energy sources by the 12-year U.N. deadline and “eliminate poverty” in the process, creating thousands of new green jobs. Currently, Sunrise has hubs of youth in cities all over the country and it’s very easy to join one near you and get plugged into the movement.

If you’re searching for something more local you can look into the issue of the Line 3 pipeline, which would carry 750,000 barrels of dirty tar sands oil per day through  Minnesota. The pipeline violates treaties with indigenous tribes, puts sacred wild rice beds at risk, and crosses the Mississippi headwaters.

The “construction of course causes a whole bunch of destruction to the soil, to the local ecosystems, the removal of trees along new portions of the route and also the spiritual and cultural insult of doing this kind of construction through indigenous lands” said Akilah Sanders-Reed a community organizer with the Power Shift Network.

According to the Line 3 Environmental Impact Statement Line 3 is also estimated to have a 287 billion dollar “social cost of carbon,” the amount of money that would be spent fixing its predicted climate impacts.

Currently, our new Governor Tim Walz has significant power to approve or deny permits for the pipeline. Despite saying he wants to prioritize climate change and indigenous rights he came out as pro-Line 3 during his campaign. He has not yet made a public statement of whether he will support it now that he’s in office, so it’s important now more than ever that you call him at 651-201-3400, tweet at him, DM him on social media, or contact him in whatever way you can telling him to stop Line 3.

Whatever you decide to do, remember. The future generations will look back at this moment as critical in shaping or breaking their lives if things continue as they are.