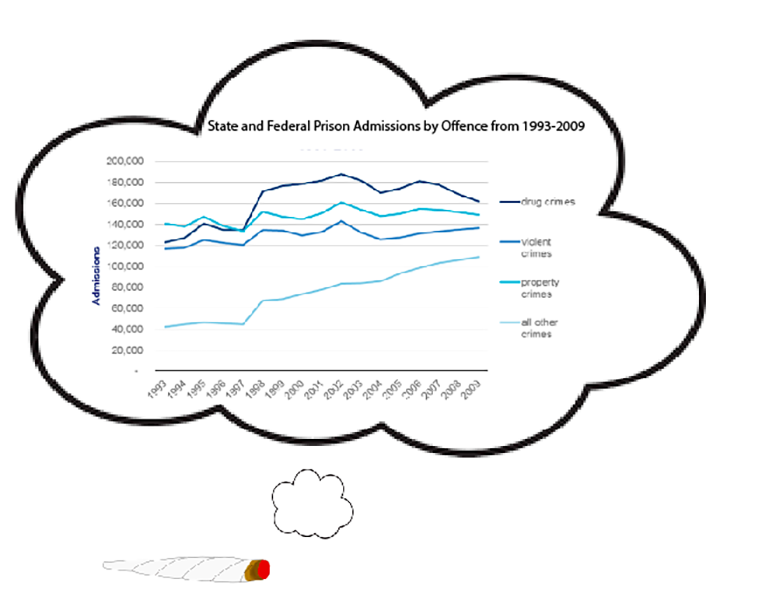 In 2009, drug related crimes accounted for the highest percentage of prison admissions. Criminalizing drugs is responsible for giving the United States the highest incarceration rate in the world. This largely began with the war on drugs, which was designed not to help those dependant on drugs, but to punish them.

Most, if not all of us, have encountered drugs in one setting or another. Especially as high school students, we all probably have used or know drug users. And along with that, many South students hold fairly liberal views on drugs and drug use. However, federal law is not as forgiving, and across the country, large numbers of people, disproportionately people of color, continue to be unfairly subjected to harsh punishments without being provided any sort of help. If the government really cared about stopping the consequences of drug use, they would rehabilitate those who are dependant on drugs, instead of jailing them. Case in point, it’s time to decriminalize drugs.

Drugs aren’t just a topic of national debate though. Many members of the south comunity have something to say on it, and have even been caught up in the issue.

Terrence Roberts is one of the many school workers that often deal with kids using drugs. “We try to be as fair as we can” he says. “We get parents involved, social worker, the admin, myself, and the district chemical health person to kinda help these students who maybe are into drugs. Dealing the drugs is one thing we come down on punitively.”

Yet some students think that the school isn’t always fair in how it handles student drug use. “It seems like the teachers that care, don’t care for the right reasons” says an anonymous junior. “I think a lot of the teachers that catch you when you’re baked, they just want to catch you to get you in trouble. Not to see if you’re ok, or get you help.” The junior had once been caught smoking weed on the eagle bluff field trip for open 9th graders.

“They should be better about how they chose to punish people, because a lot of their punishments seem really unfair, like they don’t have any evidence.”

Even though opinions are diverse on how to handle the situation, there is general acceptance that no drugs in school is an understandable request.

However, punishing drug users is not a solution. Outside the school environment, heavy drug users struggle with addiction and dependency, and using and selling drugs is often the only way for them to survive. The reasons as to why people start using drugs are often complex, but its almost always the result of unfortunate circumstances that have no other easy solution. More often than not, sadly, the focus of anti-drug efforts have been on punishing these individuals, rather than helping them recover. This is especially pronounced from a national perspective, for instance, if you look at the war on drugs.

Officially declared by Richard Nixon in the 70’s, from its inception, the goal of the war on drugs was not so much about helping curve the effects of the worsening opioid epidemic growing among vietnam vets, but to arrest and jail members of Nixon’s political enemies – members of the anti-war and African American communities which were communities that society tended to associate with drugs.

A system for ranking drugs was created, with heroin and weed ranked in the most dangerous category, schedule one. By this standard, weed and heroin were considered worse than meth.

Strict jail and prison sentences were handed out for as little as possession of certain drugs, and harsh sentencing laws, such as three-strike laws and zero-tolerance policies, sprang up across the country. As a result, the U.S incarceration rate skyrocketed, specifically for non-violent crimes. This trend continued under the presidencies of Reagan, Bush, Clinton and Bush II. According to the Prison Policy Initiative, state prison populations exploded from 300,000 in 1980 to a peak of nearly 1.5 million in 2009.

These new policies also caused an extreme disparity in prison demographics. According to Human Rights Watch, people of color, primarily African Americans and hispanics, were nearly three times as likely to be arrested and convicted for crimes such as possession or distribution than white people, despite the fact that white people were statistically more likely to use drugs.

Police forces in cities and towns across the country were given more money to fund the war on drugs. Consequently, modern police forces look like paramilitary organizations.

So basically, the war on drugs, as its designers had intended it, was working.

To make matters even worse than destroying communities, imprisoning individuals and targeting and disenfranchising people of color by slapping un-deserved felonies on their records, it wasn’t even doing anything about drugs.

In fact, criminalizing drugs actually made the situation worse in a lot of ways. The war on drugs has actually, believe it or not, fueled an increase in drug related violence. The drug war pushed drug production and distribution into the dangerous realms of the black market, and although the situation is the U.S isn’t as bad as it is in Mexico, where the rise of powerful drug cartels have resulted in the deaths of tens of thousands, it has still worsened since the beginning of the drug war.

The war on drugs has even contributed to the spread of AIDs, as proponents try to inhibit distribution of sterile needles.

Surely, with all these faults, there must be a better solution than what the war on drugs has to offer, right?

Very much so. And recently, things have started to change course for the better, albeit moderately. To deal with severe overcrowding, some states have been doing away with the harsh sentencing of the previous decades, and some have even been shortening prison times for those already convicted.

There’s definitely more steps to be taken, though.

Focus has been primarily on punishing drug users, but as we move away from that, we should also move towards offering rehabilitation programs to those who are dependant on drugs. This would be ethical not only because it would allow drug users who would otherwise be jailed to recover and continue being active members of society, but it would also reduce the chances of overdose by allowing addicts the right amount of whatever substance they need to prevent overdose and harmful withdrawal.

Decriminalizing drugs would also save us a lot of money. Like, a LOT of money. The total bill so far for the war on drugs has been over one trillion dollars for housing inmates, paying government drug officials, equipping police forces, and funding international operations, like the 7 billion we spent in Afghanistan to stop the opium trade.

We failed, by the way.

Furthermore, limited legalization of drugs would make the U.S even more money. It would allow drug sales to be taxed, and we could even use that money to pay for rehabilitation programs and campaigns to warn about the dangers of some drugs, such as heroin or meth, similar to what happened to the tobacco industry.

Partial legalization would also allow government regulation of drugs, which would contribute to public safety by reducing drug violence caused by black market trading, as well as controlling what substances drugs can be made with and how much is sold at a time. And of course, there would ideally be age limits like there are with alcohol and cigarettes.