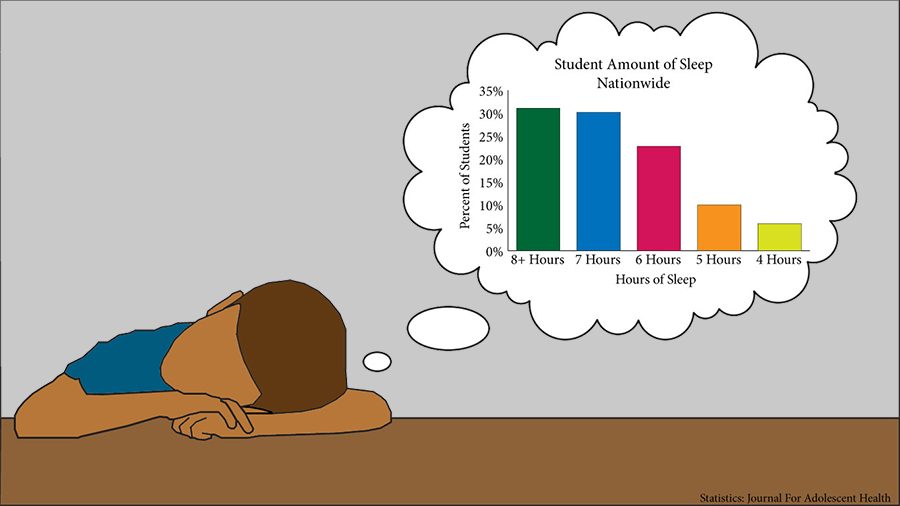 The results from a study by the Journal of Adolescent Health on student nationwide sleep. The minimum recommended amount of sleep for teens is 8 hours yet the majority of teens get significantly less than is healthy. This is heavily influenced by school’s disregard for teen sleep patterns.

The average teen needs around 8-10 hours of sleep but the majority of students find a hard time achieving this.  Why is this?  Well the average teen brain is programmed to start feeling drowsy around 10:45 or 11:00 P.M. While this doesn’t sound like a problem in itself, the issues start popping up when students are forced into school half asleep at 8:20 in the morning or even worse, 7:15 for students taking a zero hour.

The consequences of being sleep deprived are serious: drowsy driving is a significant source of car crashes in the U.S. and these are closely related to school start times.  The National Center for Biotechnology Information found,  “Virginia Beach (VB) and Chesapeake are adjacent, demographically similar cities.  VB high schools start 75-80 minutes earlier than Chesapeake’s…In 2008, there were 12,916 and 8,459 Virginia Beach and Chesapeake 16- to 18-year-old drivers, respectively. For VB and Chesapeake, teen drivers’ crash rates in 2008 were 65.8/1000 and 46.6/1000… respectively, and in 2007 were 71.2/1000 and 55.6/1000.”

With car crashes being the number one killer for teens in the U.S, keeping teens alert and awake by providing enough time for sleep should be high on our priority list.  As well as that, the human brain has a difficult time learning, processing information, and retaining memory when it has not been given enough sleep which leads to students falling behind in school and not learning.

Sleep deprivation can put students in a bad mood and it can worsen mental health significantly.  These mental health problems are not to be taken lightly, Journal of Adolescence found , “sleep deprivation, is associated with…depression, anxiety, anger, inattention and conduct problems, drug and alcohol use, impaired academic performance, and suicidal thoughts and behaviors. They also have been reported to have more fatigue, less energy, worse perceived health and symptoms such as headaches, stomachaches and backaches.”

School start times are poorly timed.  If the department of education expects students to achieve to their highest academic potential it makes no sense for them to have the start of school days so early in the morning.  Sophomore Jewel Ferguson explained that the issues of sleep deprivation go beyond just academics and can influence her social behaviors. “It makes me really distracted when I don’t get enough sleep and it makes it easier for me to fall asleep in class which is not good.  It makes me an unpleasant person to be around and I’m tired all the time and I don’t get enough focus and if I wait until after school to sleep than I don’t have time to get my homework done,” she expanded.

Sophomore Kieran Panning-Miller commented on the confliction between school start times and his sleep pattern, “I sleep usually late, and then go to sleep kinda late but because school start so early I have to shift my sleep schedule which usually doesn’t end up happening.” The endless cycle of making plans to improve sleeping patterns and not following through with those plans can take a large toll if it continues over long periods of time.

These problems are serious and they are affecting many students.  If South wants to move forward as a school it needs to push back its’ start time so that students will get the amount of sleep they need to be healthy human beings.  I think schools should start around 9:00, this would be early enough where students could get a significant increase in sleep but not too late so that after school activities are still during an appropriate time.

To push back school start times we need education.  There is a lack of education about teen sleep needs and schools’ role in disrupting them.  We need to spread the word about the negative consequences of sleep deprivation and raise awareness if we expect to change anything.  Voice your disapproval to the administration at school, talk to parents about teens biological sleep clocks, express your dissatisfaction to other students.  If people start hearing a unified voice protesting schools disregardful of students sleep needs they will heed the public opinion and we will see the changes that some of us desperately need.