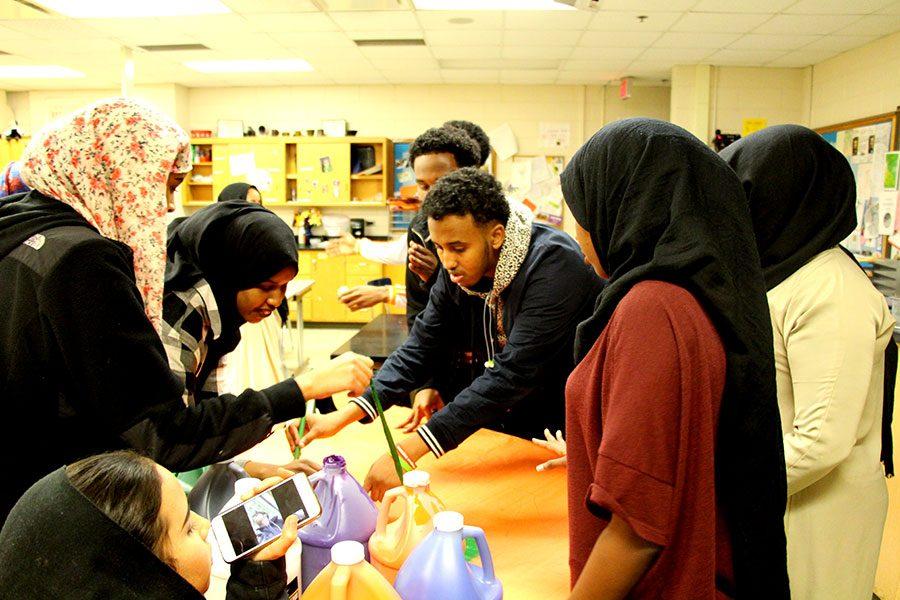 Seniors Iqlas Ibrahim (left), and (right) Anas Farah, the president of the Muslim Student Association (MSA) help along with other MSA students to create a poster for the African Culture night event held at South High. The African Culture night will be on Thursday, March 30th from 5-8 PM. There will be music, food and a sharing of culture at this event. MSA is the only group we currently have at South that is faith based. The opportunities provided by MSA for their members to work together on projects such as the poster provide further time to bond.

As inclusive as South may be, I’ve noticed it is lacking in certain communities. South students would greatly benefit from more religious based groups.

Faith is a large part of many people’s lives, and having a safe space at South for students to connect is vital to many people here. Having a religious based group(s) at South could help students feel comfortable expressing their faith, and help them connect to fellow students with either similar, or completely different views and faiths than their own. We already have one religious group at South, the Muslim Student Association (MSA). MSA provides a community for muslim students at South to feel connected, and after observing one of their meetings it’s clear just how close the students there are. Providing even more safe spaces similar to the community provided by MSA should be the next step in making South an even more open and inclusive space.

Sophomore Eiset Mebrahtu expressed how even though South is a very open school, it isn’t as inclusive as people think. “There isn’t really a religious group I can connect to at South,” he said. Mebrahtu is an Eritrean Orthodox Tewahedo. “We are really underrepresented… especially Eritreans in general,” Mebrahtu said.

Students aren’t the only people who feel this way, administrators strongly feel that a connection to the community at South should be a part of every student’s high school experience. “I think a lot of times as youth we battle to feel connected, we battle to feel a part of something, so for some people that’s football, for some it’s church,” Mercedes Reynolds, an assistant principal here at South said.

“[Faith] plays a very large role in my life,” Mebrahtu said, and many other religious people feel the same way. He believes being able to connect with a group of people with a similar faith as your own is very important. “I think it builds this mutual bond that is necessary, and it helps because not only do you see them inside the school but you see them at church and outside in the community and transcending that inside to the school strengthens that bridge of intersectionality within South,” Mebrahtu said.

If these groups were to form, they would not necessarily have to be specific to one view or faith however. While some people may express concern over having so many opposing views together, exposure to many different views could be beneficial. “I personally do not [identify with a faith or religious group], but I respect people that do just as long as they don’t force it on me,” freshman Audrey Janz said.

“I think it’s nice to have a broad spectrum of different diversities of religions,” Janz said. “I think it’s specifically important to raise awareness that there are other communities out there that do practice other religions and how we should grow to respect such, but also at the same time not let that affect our own beliefs.” Mebrahtu said. Despite Mebrahtu being religious, and Janz not identifying with a specific faith, the two seem to agree on this point.

The idea that it’s valuable to connect with people who have different views than your own is widely shared among the South community. “Everyone should feel comfortable being with people that are different from them and also people that are the same [as] them,” said Reynolds. Don Winnes, a math teacher and the math team coach at South said, “It would be good to talk about what other people believe and why they believe it.”

One concern that is present during the forming of new groups is what is referred to as the separation of church and state. There are certain laws that affect what religion can look like inside a public school. While the laws that are in place need to be considered while forming new groups, none of those laws have created major obstacles. “There has been nothing so far that has reached a barrier that we couldn’t pass,” Reynolds said while talking about the formation of a group. “I know that we have this separation of church and state, but when you all agree to get together in a space and it’s not part of the curriculum and we are not pushing it on others it’s my feeling that can be just as beneficial as any of the other student groups we are running,” Reynolds said.

Overall, having more communities with a religious base or theme is necessary for community growth and spreading awareness and respect of various religions. “Knowing who you can be comfortable with is something that’s reassuring to a lot of people who want to express [their] religion,” Janz said. Winnes believes religious based groups are “a way [students] can encourage each other and help each other deal with different things that come up in life and in school.” Not only are you bonding with people over your beliefs and ideals, you use that strengthened bond to help each other overcome barriers and boundaries in everyday life.