Hillary Clinton: A candidate with a real chance 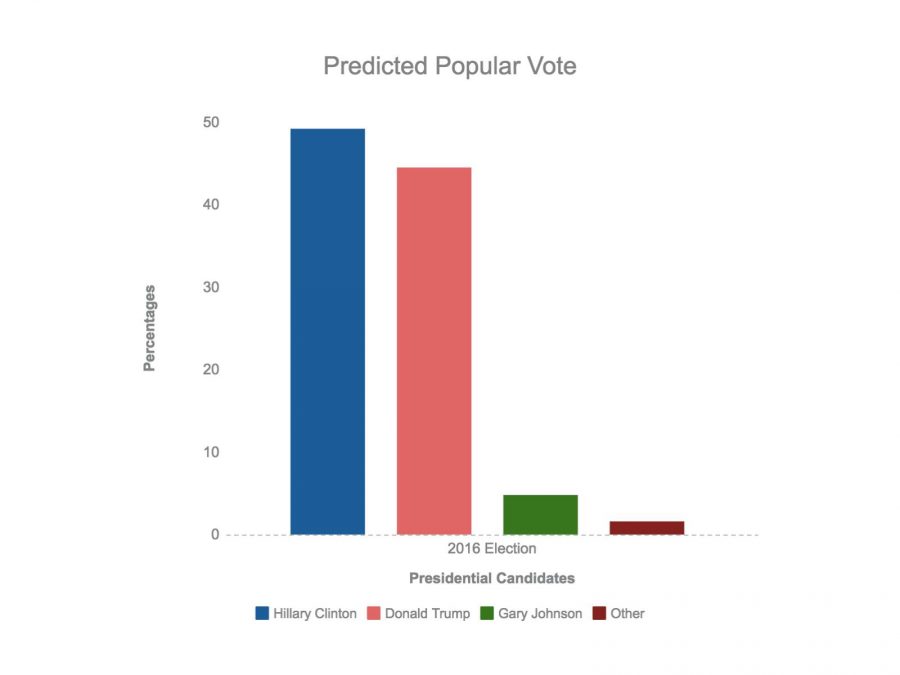 This infographic shows the Clinton is currently in the lead, with Donald Trump close behind. Most importantly, it shows that third party candidates have a very low chance of ever getting elected because of the little support that they have.

Overall, South is a liberal school, and many students have strongly supported the Democratic candidates throughout this election process. During the primaries, many supported Bernie Sanders over Hillary Clinton. Since Sanders left the race, some have turned to third-party candidates because of their progressive views.

However, most liberals can agree that a Donald Trump presidency would be a highly undesirable outcome, due to his racist, misogynistic and overall problematic views, such as banning all Muslims from America. Because of these views, and the fact that Hillary Clinton is clearly qualified to be President, it’s evident that she is the best candidate to vote for.

Some of Clinton’s policies are not as progressive as those of the third-party candidates, and not all of her ideals align with what many Democrat voters want, but overall her ideals, similar to those of President Obama, hold great potential.

Clinton is pro choice, supports gay marriage, and wants to regulate gun ownership. She believes that taxes should be increased on the wealthy and not the middle class or below. Most importantly, she believes in creating a nation where all Americans have equal opportunity and rights, and understands that there are complex problems that need addressing, like racism and sexism.

Her views on war and foreign policy, such as supporting military action in the Middle East, are more conservative than many of us feel comfortable with, but they are much more reasonable than the far-right conservative views of Trump.

Even more, it isn’t necessarily bad for a president to hold somewhat more moderate policies, given that she needs to work with people holding a wide-ranging diversity of views. Trump’s campaign has revealed the overwhelming number of people holding extremely conservative views. Our country also has many moderate Republicans and Democrats. This diversity of views exists not only among voters but in the House of Representatives and Senate.

As senior Josiah Ferguson stated, “I think that her policies are the most politically feasible policies that could actually be put into place with what will likely be a Republican Congress, and still promote the values that liberals [have].”

Many people feel dissuaded from voting for Clinton because of the controversies surrounding her, a primary example being her use of a private email server while being Secretary of State to send classified government information. She has been investigated and attacked for this many times, and though it was a serious mistake, the criticism has become a little inflated. She has acknowledged the mistake, and it is time to move on. Even more, as Ferguson pointed out, “many of the controversies have been created [or exaggerated] by Republicans seeking to discredit her and her husband… I believe that the standards are especially high for a woman running for President.”

Another one of Clinton’s qualifications is her experience working in government as Secretary of State and Senator of New York. She has been extensively involved in policy-making and has participated in high level diplomacy with foreign governments. She also has experience working with fellow legislators across the political spectrum and was highly respected by many of her Republican peers while she was a Senator.

However, many people dislike Clinton because she represents the political elite, and has benefited from her elite connections. The fact that she has changed her opinions on issues repeatedly makes her seem untrustworthy as well. “I think one of the primary [negative aspects] about Clinton among Democrats at least is that people [don’t] trust her, they [don’t] like that she [has] establishment… I agree that she [has] establishment, but I also think that she has experience, which is [more important],” said junior Noah Adriany.

To sum it up, Ferguson said, “The benefits of her long experience working in government and fighting for many disadvantaged communities outweigh any costs like secrecy, or some questions about judgement. She has been tested many times throughout her career and she has a concrete grasp of the policy that’s needed.”

The third-party candidates do not have enough recognition to win, because of our country’s two-party system in which third parties never stand a chance at the national level. As sophomore Marie Stebbings said, “The [third-party candidates] are never going to win… I think the biggest percentage of the popular vote that a third party candidate got was like 14%, that is nowhere near a winning percentage.” Given this reality, the best choice for Democrats in this election is to unite in support for Clinton.