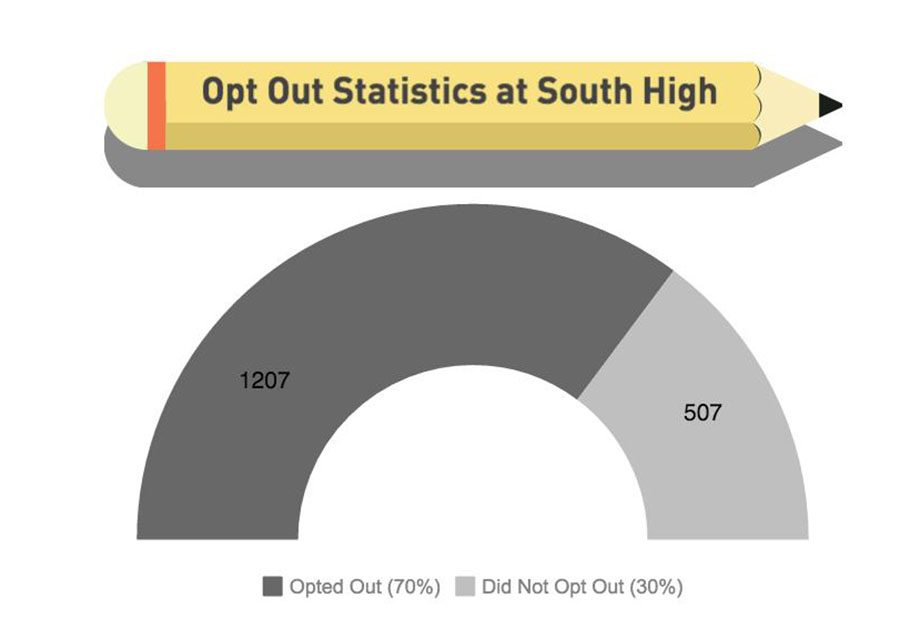 Students who opted out of a diversity of different standardized tests, including MCAs and MAPs.

Standardized testing is criticized for requiring teachers to teach material they wouldn’t necessarily focus on in their classes. However, state standardized tests are written based on state standards, which teachers are required to teach in their curriculum. These tests allow educators to check in with their students and evaluate how they are teaching to the state mandated standards, not necessarily an unfair assessment of their teaching as a whole.

Schools are evaluated and ranked nationally by their performance on these tests. If a single student is struggling in a specific testing area, they’re given a state-funded tutor and transferred to a school that performs better on the specific test subject. This also notifies the district that additional resources need to be put into that specific department. Standardized testing gives the student an opportunity for growth through personal evaluation. Rather than the teacher having to keep track of every single student’s individual performance, standardized testing allows for an annual mandated review of student’s progress for quick reference and reviews with ease.

The usage of standardized testing is often overwhelmed by the criticism towards the standards and the spontaneous evaluation of a student’s progress. However, it does provide a useful view for districts to accommodate their schools and their students to better improve their education. Although they aren’t perfect, entire schools opting out doesn’t provide much opportunity for evaluation and potential improvement.

According to the Twin Cities Daily, “Standardized test scores determine everything from school funding to firing principals.”  This amount of emphasis is put on the tests because standardized testing provides clean and simple statistics of students’ apprehension of the state’s required curriculum.

Requiring students to take the Minnesota Comprehensive Assessments (MCAs) and the Measures for Academic Progress (MAP) tests in junior high and high school is productive preparation for the college entrance exams that are required for acceptance into most American colleges and universities as well as passing the Advanced Placement and International Baccalaureate exams.  Though many of the arguments against standardized testing are meritable, the issue is more in the high stakes aspect of the test than the actual test.

Annie Murphy Paul writes in an article for TIME magazine, “ What we need is a regimine of no stakes testing.” If students took standardized tests merely to collect data for the district that would help improve school curriculum as well as prepare students for testing environments in post secondary schools, the test takers’ stress levels would be significantly lower which would most likely achieve more accurate data in regards to what the students know as well as fewer parent complaints or withdrawals from the tests.

In an article published by The New York Times, Chad Aldeman says “Coincidentally, the push for limiting testing has sprung up just as we’re on the cusp of having new, better tests.” He goes on to explain that over the last four years, president Obama has invested over $300 million into creating new and improved standardized tests.

With all of this “tests are great ways of assessing students’ learning as well as school districts” talk, why not just take regular tests in normal classroom setting?  Some teachers are better than others, some classes are more difficult.  Maybe you took an Honors World History class versus simply a World History class.  The tests need to be standardized so that every student in a district is being tested at the same level on the same subject matter.  It leads to better collection of data as well as helping students by letting them know which subjects they are not testing well in so improvement can happen.

Though the current frustrations over standardized testing are reasonable, the answer is not to wipe them out altogether.  By minimizing the impact that the tests have on students’ futures, anxiety levels will decrease and they can focus on fulfilling their purpose; to assess which departments need resources, get a grasp on the basic level of curriculum learning district wide, and highlight specific areas for individuals that can use improvement.