My sexuality did not define me 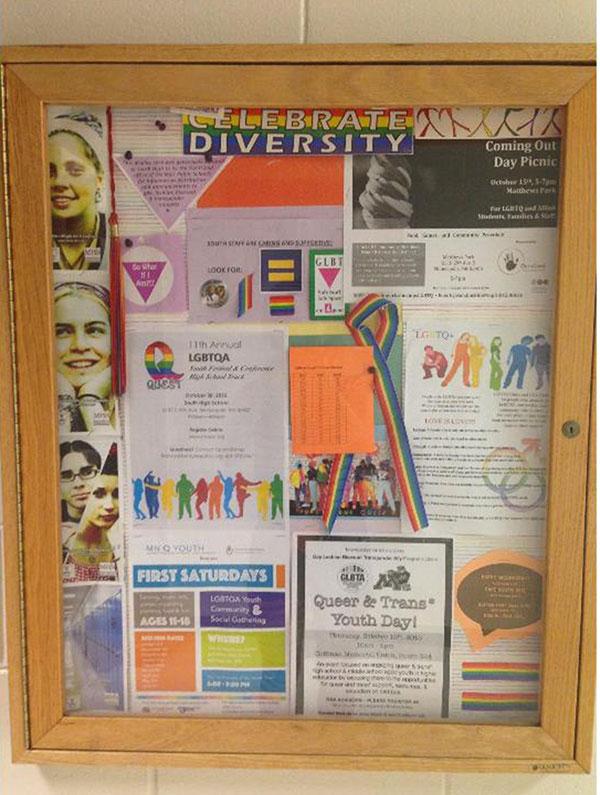 Display case in South hallway contains lots of rainbows, and information about events for queer youth. Display was donated to South by the Out4Good office of the MPLS Public Schools.

The end of my 8th grade year came like a punch in the stomach to me, and I was scared. Everyone painted up this extravagant picture of high school in my mind that was not only false, but also had me staying up at night dreading. Growing up in a queer household, with lots of queer friends, I had heard story after story about how high school was the worst years of their lives. Stories about getting jumped, stories about being turned away at school dances, stories about being the “weird” kid in the corner who gets picked on all the time.

Coming from a very progressive, open, and small middle school, coming out was never a big deal. I guess you could try and pin my coming out down to a day in the gym, talking to my teacher about the whole “vote no” campaign about gay marriage in Minnesota. You could maybe say I did during a presentation about the Stonewall Riots that I wrote and presented on a school bus. But there was never a time where I had to sit people down and say “I’m gay”, and have it be a huge thing. I think that was one of my biggest fears about going into high school, was that I thought my sexuality would be a big deal, that it would define me.

I remember being super nervous during freshman orientation. Seeing what the physical school was like for the first time and seeing bouncy seniors call us “fresh meat”, I felt tiny. We were all split into a few groups, and my group was supposed to go to the YMCA. On the way there, there were a few people asking me what my plans for high school were. I told them a few things, like how I wanted to join the math team, and maybe become a part of theater, but in my head I was having this battle about whether or not to talk about joining the GSA. I had been avoiding the question of whether or not I wanted to come out and then this conversation happened and I didn’t know how to handle it.

After some muttering about and finally mentioning something that I maybe wanted to join the GSA, a senior named Alex who was walking next to us turned into the conversation, and was obviously super excited. He told me that he’d remember to tell me when the GSA met when he found out, and that it was awesome I wanted to join. Later that day, he was my smaller group’s tour guide, and he told me about how great of a school South is when it comes to accepting queer youth. He told me a little bit about how South was hosting an event for LGBTQ youth later in the year called Qquest as well, and he showed us the new gender neutral bathroom. I went home that day and I remember a few of my nerves calming, and telling myself, “it’s going to be okay.”

Though I had had this experience, I still wasn’t sure whether I wanted to stay in the closet or not. It turns out I’m really bad at pretending to be straight, but I tried. I ended up in this situation where I obviously didn’t feel comfortable lying about my identity, and started leaving not-so-subtle hints everywhere. Eventually though, I found this group of friends. I realized that it was just sort of pointless to be spending so much energy covering myself up.

Soon I had got myself a date for the homecoming dance. She was a girl, and I hadn’t really brought her up to my friends yet.. All of my friends were sitting around a table and I told her I wanted to introduce her to them. We walked over holding hands, and I got everyone’s attention. “Guess who got a date to homecoming?” I laughed, sort of squealing like one would when they’re talking to their friends about a new date. My friends “awe”d and one of them rolled her eyes at me for being so excited, but that was it. Nobody mentioned she was a girl. Everyone was just happy.

I noticed that this was the general attitude that people gave me and my soon to be girlfriend. It was okay to hold hands in the lunchroom, and kiss goodbye in the halls. Of course we got the occasional “aw, you guys seem like such good friends!” but we’d correct them, they’d quickly apologize and it’d be a new conversation. It was exactly the opposite of how I’d feared. It wasn’t a big deal. There was no “coming out process.” My sexuality did not define me.

I think that one of the biggest reason why South is such an accepting school is because of it’s size. With size comes diversity. I’m only a freshman so I don’t know what school here was like forty years ago or ten years ago or even two years ago. But I do know that there is such a wide range of personality and sexuality and culture and background, that it doesn’t make sense to hate on someone else for theirs.

All of this is coming from my personal situation, but it’s important to understand that not everyone is as lucky or feels as happy as me. There are still people under our roof who feel uncomfortable and scared to be open. A big example is that the school still has a long way to go with accepting trans folk. The gender neutral bathroom is great step, but we’re not done there. We’re never truly “there”. We can always work harder to help understand others, and learn to accept each other for  who we are. Recognize the good and the bad, and try to eliminate hate. To remember that we’re all in this together.