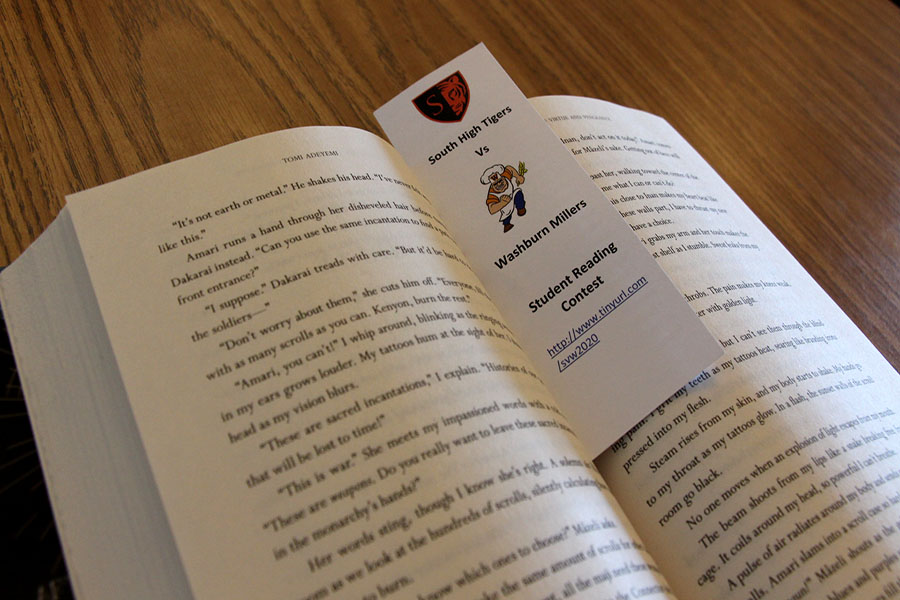 Bookmarks were passed out as one of the multiple ways of spreading the word about the competition. South’s most avid readers dedicated their time in the month of February to read as many pages as possible, and ended up beating Washburn with a 47-thousand page lead.

This February, South and Washburn dueled it out in the 2020 Student Reading Challenge to see which student body could read the most book pages in one month. South took the win with a 47-thousand page lead, beating Washburn who read 37,014 pages. The competition highlighted South’s small but strong population of avid readers.

A similar challenge had been held the past few years, where Washburn and South teachers and staff attempted to out-read each other. The teacher’s competition happened in November, and was neck-in-neck throughout the month, but South’s staff ended up winning.

One of South’s librarians, Debra Snell, was one of the main organizers of the student challenge. She explained, “As we were talking about staff having a competition against one another, we were like, ‘Hey! What about the students? Wouldn’t that be fun to do it with the students too?’ It’s fun to do a little competition, and I could never quite figure out how to do one with the students, because with the staff, it was a small group.”

Snell decided to talk to the English Department in December to get the English teachers on board. Ms. Antone, Ms, Hodge, and Ms. Johnson all held mini-competitions in their respective classrooms, where each period competed against each other to see which period could read the most. In addition, there were some presentations held in english classes to get more students on-board.

The winners of the challenge were given $20 gift cards to Barnes & Noble, and all participants received an “I read” sticker that resembles the “I voted” stickers given at voting events.

Grace Gnronfoun was the top reader out of all South 9th graders. She enjoys reading in multiple genres such as fantasy and historical fiction. She read manga books, which were counted in the competition as 4 manga pages to 1 normal page. She chose this genre because she enjoyed it and she could read many of them in a short period of time.

She described, “I read (the manga) Dr. Stone, One Punch Man, and Bungou Stray Dogs – ones with a lot of chapters. Dr. Stone is about the world where there was an event that turned everyone stone. After two thousand years, some people disintegrate or turn back into humans. It’s the story of a scientist that’s trying to rebuild human civilization and the people he meets along the way and a lot of science-based stuff. It was funny, it had some science, it taught you how batteries worked, while still being entertaining.”

Bianca Morcho was another student who participated in the challenge. She likes to read a variety of types of books, including murder mysteries and books about medicine.

Morcho stated, “During this challenge, I mostly read fantasy books and a few mysteries. I didn’t really read as much non-fiction because I wanted to read more enjoyable things. I read this book called Foreign Gods, Inc. It’s about this guy who’s really poor when he comes to America, so he goes back to his home country and steals a statue.”

Book club was one of the biggest contributors to South’s numbers, reading 19,236 pages. They read 23% of the total amount of South’s pages and more pages than Washburn’s 10th, 11th, and 12th grades combined. Book Club is where many of South’s most passionate readers go to experience reading and thinking about books as a community.

Librarian Snell has been the facilitator of Book Club since 2008. She described the club as her tribe, voicing, “Book club is a place for anybody who loves to read – this is our tribe. I feel like our American communities are way more into video games and watching Netflix. To find people who just really love to read, whether it’s fiction or nonfiction, if you’re reading for fun, I don’t know, Book Club is my tribe. They’re the group I belong to. The students I’ve had over the years have had so much fun in Book Club.”