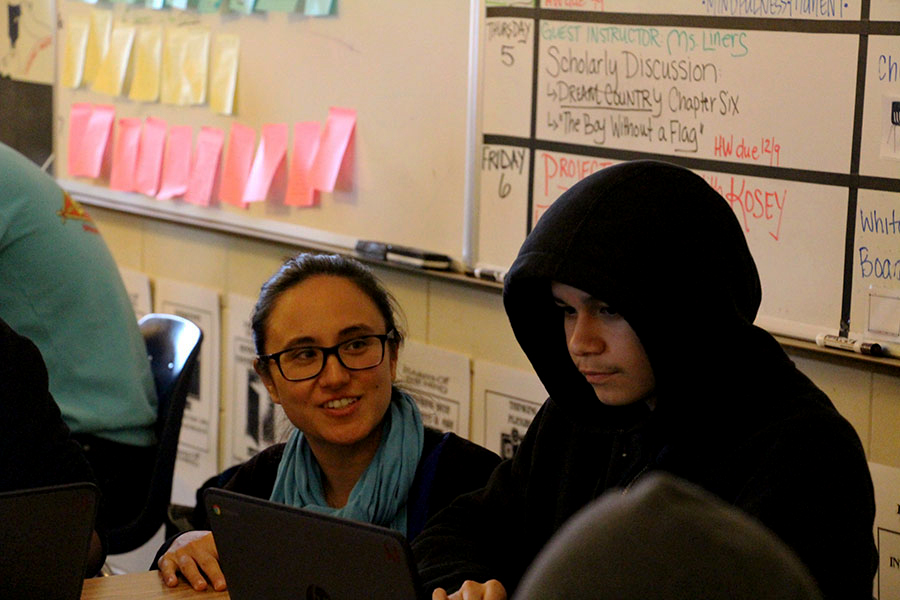 New EL teacher Irene Mineoi Amrani helping sophomore Bernardo Martin. Mineoi taught abroad in two different countries in Asia. “It was definitely a good experience... especially being an EL teacher it's really important to have lived in another country so you get an ounce of what your own students are going through.”

Hodge thinks having a co-teacher creates a positive community in the classroom. “The two of us here give two different skills, different ways, different perspectives,” she continued, “I love being in a classroom where I feel like every student gets to interact with one of us every class period, with two adults in the room there’s just more opportunity for connections.”

If there is ever an opportunity to co-teach, Hodge hopes that everybody would do it. ”I think it’s helpful for all the students,” said Hodge.

This is Mineoi’s fourth year teaching in the MPS district but overall she has been teaching for 12 years. However, not all of it has been in EL, some of those years she spent teaching elementary school music in K-12 charter schools.

Mineoi grew up in Toledo, Ohio and moved to Minnesota, where she attended St. Olaf College in Northfield. She was a music major but when her college started an EL program she became interested in learning more about it. “I just grew up as a child of an immigrant and being biracial and so it just made me interested in different cultures… and knowing that in this country, even though we don’t have an official language [it] is really important in order to succeed in this country that you need english, so it’s to help students have those skills so that they can meet whatever goal they have in life,” said Mineoi.

At the beginning of her career, she taught abroad one year in Japan, and last year she taught a school year in Qatar. “It was definitely a good experience I think, especially being an EL teacher it’s really important to have lived in another country so you get an ounce of what your own students are going through,” said Mineoi. She continued, “Based on other aspects of like adjusting to a new culture, I think it gave me a little bit more empathy for my students.”

In Qatar the language barrier wasn’t as big of a problem for Mineoi because they spoke English. Teaching in the Middle East for Mineoi was different from teaching here. “There’s so much wealth [in Qatar]… I had one student in particular that was very entitled and from the teachers perspective, he didn’t have the motivation to do anything because he didn’t really need to achieve to succeed, he already had the money from his parents and oil to just live the life he was living and I don’t find that here.”

Mineoi’s goal for this year is to build the co-teaching practice with Ms. Hodge, and to get to know her students better, as she only is with them 50 minutes a day.

“Being my first year here, I feel like it’s really an island because from a teacher’s perspective again seem to be accepted for who they are obviously…it’s just like a different exposure than you would receive somewhere else in a different part of the country or a rural area,” said Mineoi

If Mineoi wasn’t a teacher, she would not know what other job she would be doing right now.

“I’ve thought about that before and I really don’t know because I don’t feel like there’s a job that would be as interesting,” said Mineoi. “I don’t see myself sitting at a desk job, and teaching just keeps you on your feet everyday… it’s rewarding and challenging.”