“Are we prepared to fight for one another?” South students attend Bernie Sanders rally 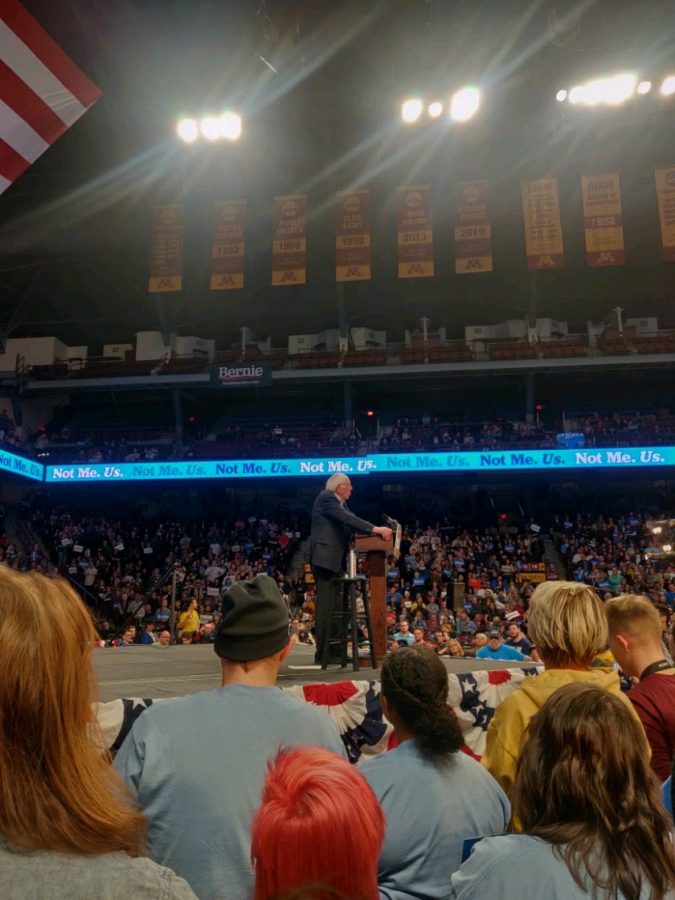 Bernie Sanders speaks to a crowd of thousands of his supporters in the Williams Arena at the University of Minnesota. Several South students came to support Sanders, a frontrunner in the 2020 presidential race, and hear more about his plans. “The energy of being around other Bernie supporters was too good to miss,” said Tiger Worku, a senior at South who attended the event.

On Sunday, November 3, Presidential Candidate Bernie Sanders held a rally with Ilhan Omar in the Williams Arena at the University of Minnesota. Several South students were in attendance to see their representative stand with Sanders, a frontrunner in the 2020 presidential race for the democratic nomination.

One of the students in attendance was Isra Hirsi, a junior at South. Hirsi is the Partnerships Director, co-founder, and former Executive Director of US Youth Climate Strike. In the time before the rally began, Hirsi and several members of the Minnesota Climate Strike board met with Sanders, Omar, and Minnesota Attorney General Keith Ellison.

“The meeting that we had was unfortunately very short…but we were able to ask him a few questions about his climate plans,” Hirsi said. Sanders, Omar, and Ellison all spoke at the meeting. Climate change, along with other issues such as free public college, healthcare, and the working class, was one of the key points Sanders discussed. “Ilhan and I are working together to implement a Green New Deal. The Green New Deal will not just benefit you, and you and you, but your grandchildren, and future generations,” Sanders said at the rally.

Hirsi was also at the event to see Sanders, the candidate she supports for president in 2020, speak. “I believe Bernie Sanders should become President of the United States, because I feel like his belief system, as well as everything he stands for and his policies, are something that is necessary for this country, and I think that he would be the best person to help make it happen,” she said.

Although other students were not able to meet Sanders in person, many enjoyed attending the event. One such student was Gwen McMahon, a sophomore at South. “I was there because I support Bernie as a candidate, but I had never heard him speak in person, and I just wanted to get a better sense of how he communicates with his supporters,” she said. “I thought that a lot of what [Sanders] was saying was very powerful, and I think he’s ready to make change.”

Tiger Worku, a senior at South, was also excited for the opportunity to attend a rally for Sanders. “The energy of being around other Bernie supporters was too good to miss,” he said.

Worku had seen Sanders speak once before at an event in 2016, and has continued to support him for the upcoming election. He plans to vote for Sanders in the primary and general election.

McMahon cited healthcare as one of the issues she cares the most about in this election. She mentioned how moved she was upon hearing Sanders say that nearly half of people who are diagnosed with cancer burn through their life savings in two years. “I thought [the statistic] really stuck out to me,” she said.

Along with his policies and his beliefs, the demographics of his supporters are another reason why students are supporting Sanders. “I think that it’s really important to support him because his base is one of the most diverse out of all the candidates,” McMahon said. Omar, who spoke before Sanders, also discussed diversity within his movement. “It’s about time we build a movement that is a reflection of all of us,” she said.

Throughout the rally, Sanders’s slogan, “Not me, us,” was chanted by the crowd. In line with this message, Sanders ended the rally by asking of the crowd, “Are we prepared to fight for one another?”