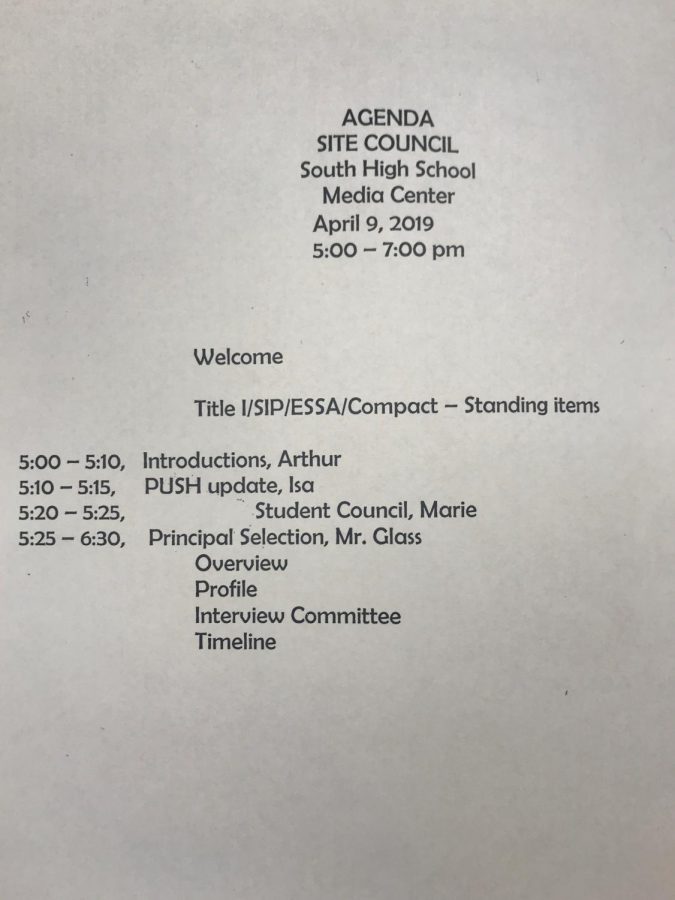 On April 9th, 2019 Site Council held a meeting to discuss South’s search for a new principal. Parent LaCresha Dotson described the meeting: “I think it went fairly well. I think what I heard though is that we’re a little bit behind the eight ball. We’ve got this monumental decision to make and not a whole lot of time to make it if we want to get the best candidates.”

Usually Site Council meetings take place in the small conference room across from the main office, but the Site Council meeting of April 9th, 2019 wasn’t just any meeting. The purpose of the meeting was to begin the search for a new principal, and due to increased attendance it was held in the media center. After a few brief statements from assistant principal Isabel Rodriguez and student council representative Marie Stebbings, Daniel Glass, the person in charge of principal and assistant principal hiring for Minneapolis Public Schools, began to describe the process of finding a new principal for South High School.

First, the Site Council and others in attendance need to create a finalized survey for students, staff, and parents. The survey results will create a profile that Glass will use to find potential matches from a pool of candidates. Those candidates will be interviewed by a committee of South High community members who will give a recommendation to the superintendent. The superintendent then makes the final decision.

Glass described his role in the process: “My job right now is to make sure we have a deep pool of people to draw from.” Applicants must complete a set of rigorous assessments to be considered. The assessment includes an interview with an associate superintendent and two sitting MPS principals, presenting a plan to their hypothetical associate superintendent on how to deal with a hypothetical challenge at a school, a role-playing activity with an upset parent, and an observational activity where they give feedback to a teacher. Glass also emphasized that “this is not a district-driven process. This will be a South High-driven process.”

Glass also discussed the need to move quickly in order to secure a highly-qualified applicant. “There’s competition for people, but that being said I don’t want you to go any faster than you feel comfortable with,” he expanded.

After Glass took a few questions from teachers and parents, assistant principal Mercedes Walker discussed the survey. Many people had comments regarding the format and content of the survey questions. In the end, people at the meeting made suggestions on physical copies of the survey that were handed out. Lisa Ramirez and other members of Site Council will make changes to the current survey, then on Monday April 15th a smaller group will meet to finalize the survey.

Walker brought up what she learned from her colleagues at Washburn who just hired a new principal last year, “they created two separate groups. They created one group that did this specific work like working on the [survey] questions, getting the profile together, once they got together building the interview questions, and doing the more mechanical work or the technical work. Then there was another committee that was completely separate from that, that had not been involved in any of that process that did the actual interviewing,” Walker explained. A debate ensued over whether or not the people on the interviewing committee should be the people to create the list of questions.

It was eventually decided that the interviewing committee would be part of a larger committee that put together the list of interview questions, which would maximize involvement.

LaCresha Dotson, parent of South junior Jordan Dotson attended the meeting. “I think it went fairly well. I think what I heard though is that we’re a little bit behind the eight ball. We’ve got this monumental decision to make and not a whole lot of time to make it if we want to get the best candidates. I think there’s some good ideas that came out of here. There are some really concerned parents, but I also recognize that there are lots of parents and stakeholders that are not here as well. So I’m looking forward to seeing how this process plays out,” Dotson said.

The new principal must be decided by July 1st at the latest.