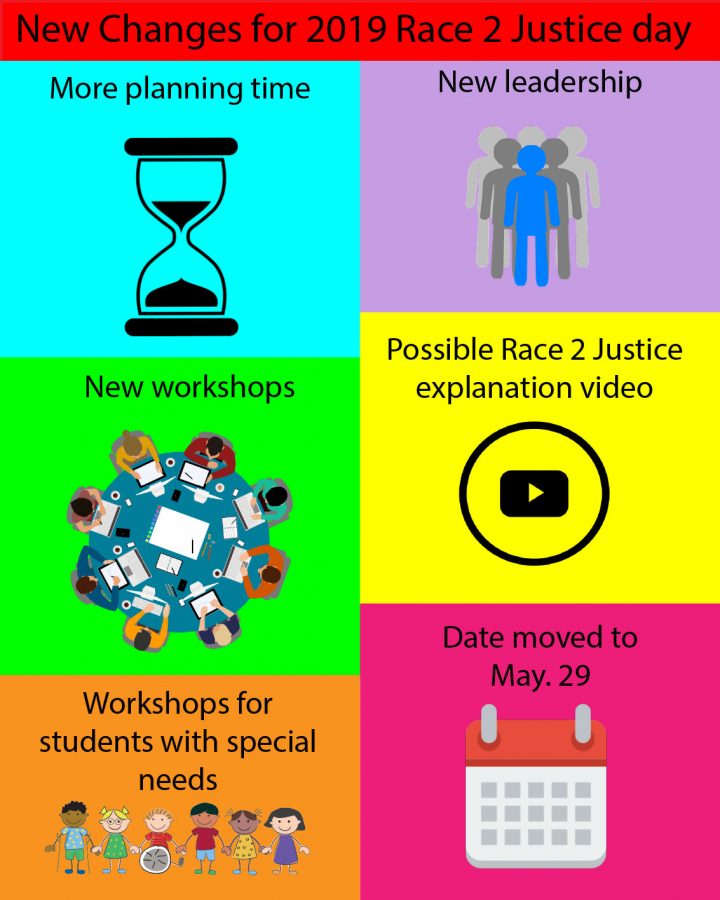 There will be several new changes to this year’s Race 2 Justice day. Above are just some of the new additions that will be made. Race 2 Justice's day tentative date is May 29th. “We want it to surround your identity, who you are as a person, your race, your culture, class, your preferences,” said South staff Alex Endeshaw on what Race 2 Justice day is striving for this year.

Race 2 Justice day is coming up on May 29th, and the team behind it is working hard to make this one of the best South has ever had.

For those who don’t know what Race 2 Justice day is, it is a designated day during school where students can attend different student led workshops that focus on culture, race, and other intersectional characteristics of people. “We want it to surround your identity, who you are as a person, your race, your culture, class, your preferences,” said Alex Endeshaw, who is in charge of the meetings. Endeshaw is also the equity and diversity coordinator here at South.

Sophomores Isra Hirsi and Sundus Ahmed are in the bookings group. “Our point is to focus on getting submissions for workshops, and also where workshops will be during the schedule,” said Hirsi. “We’re going to create a google docs form for people to sign up for where they want to be on that day and [so they can learn about] the different classes and what they are about,” said Ahmed.

The table next to bookings is technology. Ashlyn Ziegler and Tiger Worku are both members of the technology group. “We’re doing a breakdown of the structures, we are paying meticulous attention to how much time we give to the presenters, and how teachers are going to give wristbands,” said Worku, describing what his group is working on right now. “Were focusing on how the student’s days are going to run, basically the little things about the day that end up being big things,” added Ziegler.

Tea Roepke is one of the planners in communications. “Communications team gets the word out about Race 2 Justice day and we help people who want to do a workshop, we help them set that up,” she said. “We’re working on a banner right now to put in the commons.” The group is also in charge of managing the submissions for the workshops, but according to the team no one has submitted yet.

This year, expect changes to the event. One of the new features Endeshaw wants to include this year would be something useful to people who haven’t participated in a Race 2 Justice day. “We hope to have a video explaining  [Race 2 Justice Day],” said Endeshaw. “It’s something we’re looking into right now,” said Worku, who also stated that we can expect some “special appearances” if the video works out.

Another big change this year is the leadership; a lot of the students who had previously worked on planning Race 2 Justice day graduated, so a lot of new leadership would have to prevail. “We don’t have any of last year’s seniors that were a big part of planning, and started it here [at South] and so it’s hard when you’ve only witnessed one Race 2 Justice day,” said Hirsi.

Another difference is that the team will have more time to work on planning this year. “We fell behind a little bit with the break, we wanted to be a little ahead of where we are know, but we are a little bit ahead of where we were last year,” said Endeshaw. “We had less time last year because we started planning before winter break and Race 2 Justice day was late February, but this year we started in November and the event is in April,” said Hirsi. (Race 2 Justice Day has since been moved to May.)

The team is also trying to create workshops for students with special needs. “We are being more intentional about planning tracks for the most at-risk students, so there are certain programs or classrooms in this building that have more students that need certain resources, or access to certain considerations, so we are going to get all of our workshops in one place and know what we have to offer to create tracks specifically for those students so that they have everything they need that day,” said Endeshaw.

Overall, everyone in the planning room would like to participate in the planning committee next year. “It’s not a waste of day,” said Ziegler.  With all the changes the group is making for this year, they feel as if that the 2019 Race 2 Justice day is going to be out of this world.

If you would like to attend a Race 2 Justice day meeting, they are every other Wednesday in room 111.