“It’s mostly about the students”: Open teachers and students unite for a better South 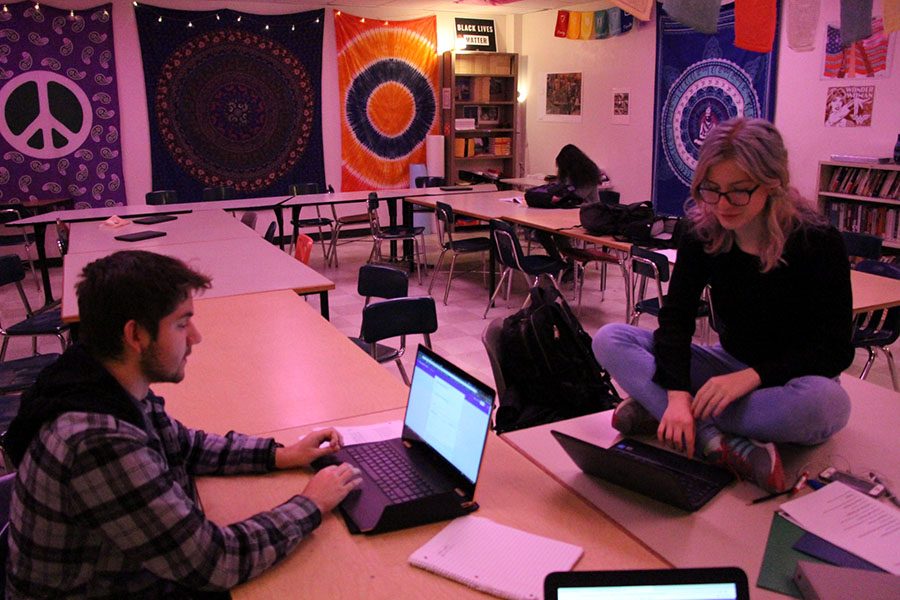 Shown is a typical Open Directional Council, or ODC, meeting, with members Nara Coldwater (right), and Ryan Rosillo (left). ODC is a collaboration between Open program students and teachers to make positive changes to the program.

Here at South, there are multiple programs which students can be placed in or choose to be in. One of the largest programs is the Open program. In an effort to include students in their involvement and impact within the program, there is a weekly after school meeting ran by Open teacher Michelle Ockman during which students collaborate and make suggestions involving future events and opportunities that could be available to Open students. The basis of the council comes from a simple idea, “…how can we serve Open students?” said Ockman.

Any and all students in the Open program are welcome to attend these meetings. Meetings cover a range of topics, and their aim is to combine student and teacher collaboration to create an Open program that both students and teachers enjoy, and feel is effective. The purpose of the council is “to help students give Open direction,” said Ockman. During meetings, students are given the spotlight: “It’s mostly about the students,” said South student and Open council member Frances Levy.

Open Directional Council is not a group that is new to South this year, it has been in existence for years, but has often discontinued meetings due to low attendance. This year, the organizers hope to keep the group going. “We have tried to start it many times…I am determined to keep it going,” said Ockman. Due to this low attendance, many students are unaware that the council exists, and subsequently do not attend.

Typically, six to eight students attend each meeting. During meetings, students make suggestions about various things that the Open program could do, such as field trips or fundraisers. Recently, the council has been discussing the possibility of having a school wide auditorium with guest speakers to talk about budding issues: “We were trying to get an auditorium with speakers to talk about the Me Too movement,” said Levy.  Another idea that the council has presented is a program in which freshmen students in the Open program can be mentored by a senior who was in the program.

One other contribution that the council has conceptualized are sunshine grams, which would be kind notes that could be sent to any student. It was described by council member and South senior Nara Coldwater as “the [singing telegram] notes on Valentine’s day, but year round.”

So far, a lot of the things that have been discussed at the council have not been put into effect yet. Yet, although a lot of their ideas have not yet materialized, members continue to be optimistic about the groups future impacts. “I think something cool could come out of it,” said Coldwater. The group hopes to eventually change the Open program for the better, and with enough time and contributions, the group can.

In addition to just making suggestions and attempting to improve the program, students have began to give each other more specific roles in order to create a more efficient group. This was process was explained by Coldwater, who said “we…loosely gave each other roles.” As a whole, Open Directional Council not only helps bring students input into the program, but also brings the students together and strengthens their collaborative skills in general.