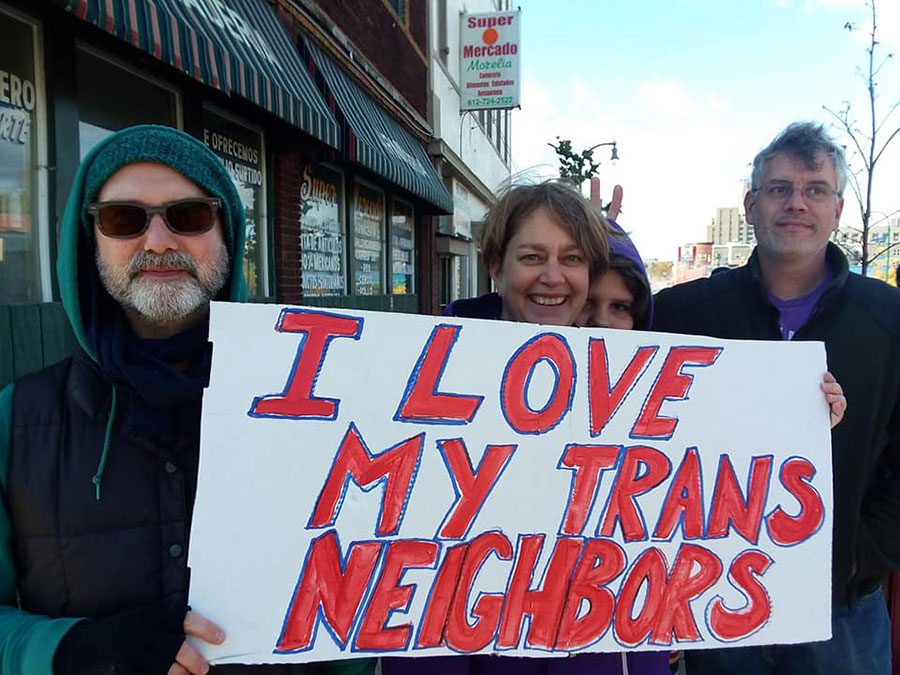 On October 28th a group of protestors rallied in support of trans people as a reaction to the Trump administration’s considered alteration to Title IX. The sign reads “I love my trans neighbors.” Many South students have strong opinions on this topic: “I haven't met one person that has been affected [positively],” said junior Levi Rolfzen on the proposed revision.

A few weeks ago a memo was leaked from the Trump administration considering defining gender under Title IX as a “biological, immutable condition determined by genitalia at birth.” This means if you identify as something other than your assigned gender at birth, it will not be recognized by the government.

Removing the formal recognition of trans people’s current identity could remove them from governmental support. “What’s gonna happen to people who are taking hormones? … He’s trying to make trans people not exist,” said M Malo, a junior at South High School. “You’re not going to be able to take hormones. Surgery is not going to be covered, you can’t do anything.”

This alteration to Title IX could have serious consequences for transgender people, including students at South. “I haven’t met one person that has been affected [positively],” said Levi Rolfzen, a transgender junior at South High School. “It’s making a lot of problems for trans people who need help and now [Trump is] making it so they won’t be able to get help at all.”

“Personally it’s affecting me really negatively cause now if this thing passes I need to get top surgery as soon as possible. I can’t afford it right now and my plan was to get it in the next year and now I’ll need it sooner,” said Rolfzen.

Many more at South also feel this consideration is an attack on trans rights. “[Trump has] attacked almost every other minority group why not include trans people,” said Malo. “Trump’s not getting hurt by transgender people. He doesn’t have to propose a bill that’s making people very upset.”

On the other side of the argument there are those who believe the alteration is not anti-trans: “[It is not an attack] because using the word attack you really have to slander them, you have got to say something bad about them,” said Davonte Hall a sophomore at South High school. “I don’t think [the Trump administration] dislikes [trans people]. You can’t have people running around switching genders… it defies biology.”

Hall states his agreement with the consideration; “I think your genitals should define what gender you are, it makes the most rational sense.” Hall believes the government should focus its monetary efforts elsewhere. “I think the government should be spending money on anything other than helping trans people transition.”

However many students feel that there is hope for a more trans friendly future. “I’m hoping that since [the midterm] election our generation is going to be the ones that are voting. So it’s gonna be such a more open space.” said Malo. “I’m hoping there’s going to be someone who’s running that’s very open.” However, as the current situation stands, Rolfzen believes that this memo is a display of ignorance. “I think [Trump] just needs to take his head out of his ass, and actually start being a president… instead of making more problems for minorities.”