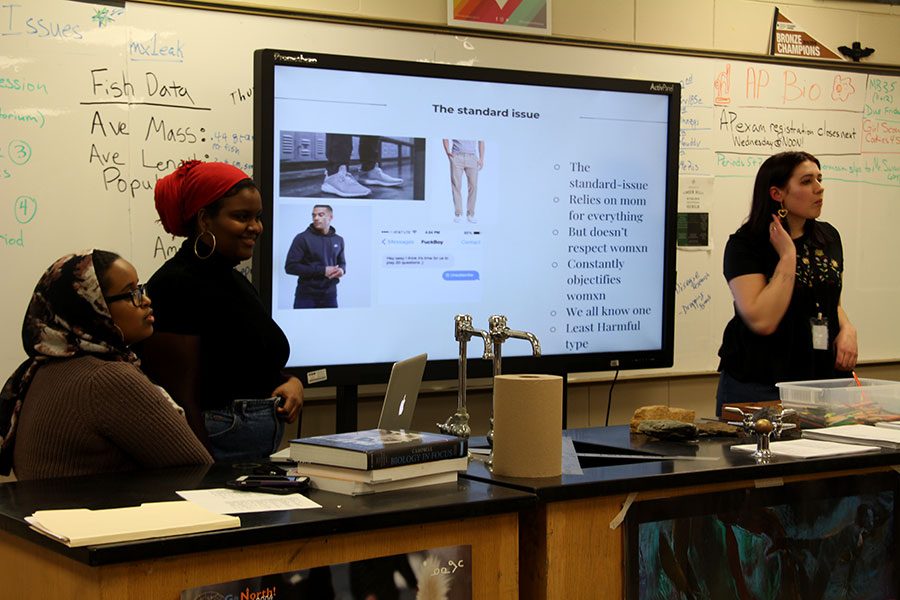 Southwest seniors Kat Lochen and Honi Yusuf led a culture workshop on Hookup Culture: How an Entire Generation Has Messed Each Other Up. Their workshop included a presentation of hookup culture, rape culture, and misconceptions about sex. This was just one of many workshops offered at South’s annual Race 2 Justice Day. Photo: Madeline Mahoney

Last Thursday was South’s Race 2 Justice Day. Formerly known as Racial Justice Day, the event marked South’s third year of having a day of workshops and presentations dedicated to social awareness, instead of a normal school day. The workshops were led by a variety of students, staff, or outside activists. The themes ranged from racial justice, to environmental racism, to “hook up culture.”

The day’s schedule was organized into four different groups by color: red, blue, green, and yellow. Each color group had their own wristbands, along with a schedule from which they could choose a culture, action or art workshop, a keynote speaker presentation, or an activity. For the activities’ portion, students could pick from viewing and creating art, going to a dance party, or watching the VOICES class documentaries from last semester.

It was the first Race to Justice Day for Alex Endeshaw, South’s new Equity and Diversity Coordinator: “This year was brand new to me. Some students had been here for all of the Racial Justice Days, and some students had been to just one. Other students had been privy to similar events at other schools, so they kind of had a bit more expertise than me this year,” he said. “This was my first time seeing it… I really leaned on the students and I was astounded by how well they did and how much they got done.”

“Rotten Tomatoes: The Evolution of Feminist Film Theory” was an art workshop led by junior Natashia Otiso, who created the presentation in collaboration with senior Caroline Haarman. The hour-long workshop included a a presentation on the history of women in film, and a short discussion. The presentation looked at a variety of iconic films through a feminist perspective from the 1930s to present day. Films discussed were Gone With the Wind, Casablanca, Some Like it Hot, Rosemary’s Baby, The Shining, Pulp Fiction, Moonrise Kingdom, Moonlight, and Moana. Otiso said she and Haarman tried, “to pick the most iconic movies of the decade, or the ones that influenced pop culture the most at the time – or still influence pop culture today.”

For Otiso, creating the workshop has taught her a lot. “I never really looked into [feminist critique] until I did this workshop with Caroline,” Otiso said. “I feel like film is a pretty important part of pop culture… All of these films were iconic films at the time they came out and people were just like, ‘oh they’re iconic. So how women are portrayed in them doesn’t really matter.’… I feel like it’s important to recognize women’s roles in film and production,” Otiso added.

“I watch a lot of movies in my time, and I never really realized that there was specific things that are seen in movies that you don’t necessarily notice,” said freshman Isra Hirsi. “She did a feminist perspective on all the movies and that really interested me and I just want to learn more about what I can see in the art industry.”

Freshman Isra Hirsi led an action workshop, White Fragility. The workshop included a presentation on what white fragility and white guilt is, student-created skits, and a group discussion. “This is an issue that I see happen a lot, and it’s not something that’s well-known or noticed… I felt like it’s something that needed to be addressed, and that people needed to notice what was happening,” Hirsi explained.

Junior Solana Cushing enjoyed the White Fragility workshop: “I thought it was really cool. It brought up a lot of stuff I don’t really think about a lot. How [white people] have to be conscious of not just how we interact with people of color, but also other white people… the discussion was interesting and I would have liked to talk more about that,” Cushing said.

Southwest High School seniors and newspaper members Eleanor Munshower, Sophie Nall, and Phoenix Pham led a workshop about journalists. The workshop was about the news’ role in democracy, and informing the people about what’s going on in our nation. The workshop touched on how Donald Trump has attacked multiple news sources and journalists since the beginning of his presidency.

Pham hoped that the workshop will help students realize that, “the right to press is a gift and what role it plays in social justice and influencing others.”

“[It’s important to] understand our privilege that our country has one of the freest medias, a lot of countries have restrictions on their media and the fact that free media is literally built into our Constitution and origin is really cool and important,” said Nall.

Hookup Culture: How an Entire Generation Has Messed Each Other Up

Seniors Kat Lochen and Honi Yusuf from Southwest High School led a culture workshop talking about hookup culture, misconceptions about virginity, rape culture, and where the term “f*ckboy” was derived from. The workshop included a presentation about what hookup culture is, types of “f*ckboys” in today’s society, how misogynistic music and rap gives in to the culture, and a discussion about consent.

“There are negative things that come with hookup culture,” Lochen explained, “but it’s not necessarily about hooking up in general. It’s how you act after and consent is super important and it can get really messy.”

One of Race to Justice Day’s culture workshops was Asian Americans: Oppressed or Oppressors?  by juniors Ben Phi and Marie Stebbings. Stebbings said the name came to be because, “there’s this really false binary that’s created that you’re either oppressed or you’re not oppressed…we wanted to create a title that was thought provoking and would allow people to think critically about how they conceptualize race and racism.”

Stebbings and Phi led discussions on the oppression and stereotypes Asian-Americans face, showing clips from films like Full Metal Jacket and videos of Asian Americans being harassed on the street. At one point the workshop leaders asked students to help them pick out which countries on a world map were part of Asia. Senior Bella Kantharak mentioned after attending the workshop that it allowed her, “thoughts to think deeper then I had before, which is really good.”

Phi and Stebbings said this was their first time leading this specific workshop and that, according to Phi, it was, “very productive.” “Both Ben and I have been involved in Asian American activism for a very long time. I think the fact of being Asian and living our lives is what inspired us to do this workshop,” said Stebbings.

One action workshop was led by 2017 South graduate Noura Abukhadra. Abukhadra focused on Fetishzation vs. Appropriation vs. Appreciation as her topic. She said she hoped her participants “got a broad overlook on what cultural appropriation is and why it’s important to think about, and also how they can empower people around them in their communities.”

Abukhadra led several discussion activities in which participants were asked to answer questions relating to the fetization of women of color, and issues of cultural appropriation. Sophomore Nathaniel Hasse said the workshop, “definitely cleared up a lot of things I have noticed in the world, and I want to use this information to fight ignorance and make the world a nicer place.”

This year for Race 2 Justice Day, the VOICES class provided a viewing of their documentaries as an option for lunch activities. Worse Than Wisconsin was a documentary by senior Melissa Gubruda. Gubrud said that the name came from something said in her documentary: “Minnesota has one of the highest achievement gaps in the country, and in our movie, one of our interviewees says ‘how can you do worse than Wisconsin?’”

Students in VOICES have a lot of freedom to pick from a variety of social justice topics. Gubrud explained, “our documentary is exploring what has contributed to Minnesota’s achievement gap between black and white students.” Gubrud decided to pick this topic because of the significance it held to her. “I’m very passionate about education and education equity,” she said.

Senior Myles Hultgren attended the Voices documentaries and thought, “it was cool that people were able to document things that were important to them, and share their feelings with people. I thought it took a lot of courage to show a video you had made and put time into to a full class of random people.”

Re-Cap of the Day

Overall, the variety of workshops and activities were a success. Endeshaw is now working to make sure that ideas that came up during Race 2 Justice Day get turned into action: “It’s hard for me to be fully satisfied with what I’ve done. So I’m in a really reflective space, kind of trying to make sure that all of these thoughts and all of these considerations that came up during Race 2 Justice Day, and that are coming up from teacher suggestions, don’t get left by the wayside, and actually turn into action for next year.”