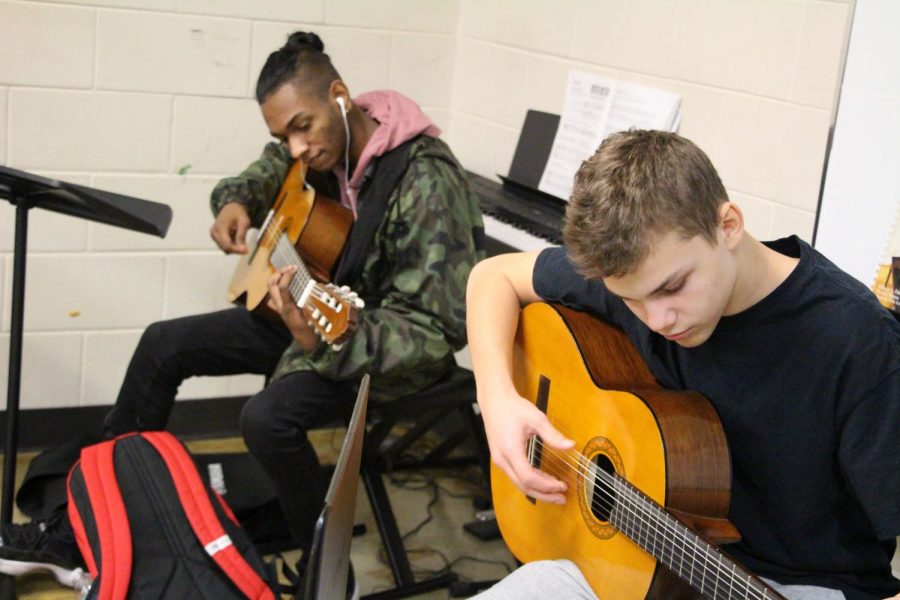 Omesh Shiwmangal, on the left, and Sam Guindon practice an original composition for a relief album music teacher Sarah Minette started. The profits of the album will go towards the Red Cross. “It’s a cool experience to mix an album and it puts the project in the hands of the students,” said Minette.

“Between the earthquake in Mexico and the Hurricane in Florida and I felt like ‘God, there’s so much going on,’” thought Sarah Minette, the guitar teacher at South, as she drove into school one day. “What responsibilities do musicians have to speak out and use our platform to raise awareness?” she asked herself. A relief album came to mind, and she brought it up to her music classes.

The students in Guitar 2 supported the idea and then began to work. For the next 3 weeks, they practiced everyday in and out of class. “First we had to learn the songs, then practice the songs and write the songs. It was a lot of preparing,” said sophomore Levi Rolfson.

“We recorded “Blackbird” by the Beatles and “I’m Yours” by Jason Mraz. Another group did rock music, like TNT, another group did an original. There was a lot of different stuff,” said freshman Sam Guindon. Students worked on harmonizing and covering old songs but also creating new songs. There were many different types of music recorded.

The process was demanding at times, but the students came out stronger musicians. “It was very stressful until I really got it down. Then it was pretty smooth near the end,” said sophomore Red Gustafson. To get ready for the studio recording, “they prepared for as many possible situations,” said Minette.

To find studio space, Minette reached out to Chopper Black. Black, a famed producer in the local music scene, teaches classes on producing music at McNally Smith College of Music. Many musicians in town use the studio and Minette hoped they could too. Black agreed to help the produce the music. One huge benefit of having the college students produce the album was that the space was free. This allowed for the project to be completed without it costing a penny for the school or the student’s families.

When the students arrived at the studio, it was overwhelming: “There were different doors and a long hallway. One door was were you could play and record.. The next door was where the booth was. It was really big and amazing. There were many different buttons I didn’t even know about,” said senior Willian Alvarez Salazar.

The students were able to complete the project in one recording session. “They just went in there and knew their stuff. They really were rock stars that day,” said Minette.

The students mixed the music and Gustafson created the album art. They decided to have album art instead of a picture because, “making something is special and people like it when you make it.” To mix the music, they used GarageBand. Since Minette had not used GarageBand before, “it was a lot of messing around.” In the end, “it’s a cool experience to mix and it puts the project in the hands of the students.”

Many students felt that the project had a large impact on them and they hoped it would have a large impact on the world. “Before making the album, I didn’t know what type of college to apply for. After making the album, it helped find out what kind of career/job I want to do. I want to be a producer or singer now,” said Alvarez Salazar. Rolfson was really impressed with the final project. “I thought it would kinda suck at first because it’s a bunch of high schoolers making an album. But it turned out great.”

For Gustafson it was “a step out of my comfort zone and taught me a lot. We helped raise a little money for people who really needed.” In the end, Minette hopes that “they see themselves even more as musicians.”

The album can be purchased on Bandcamp and all proceeds will be going to the Red Cross to help with disaster relief.