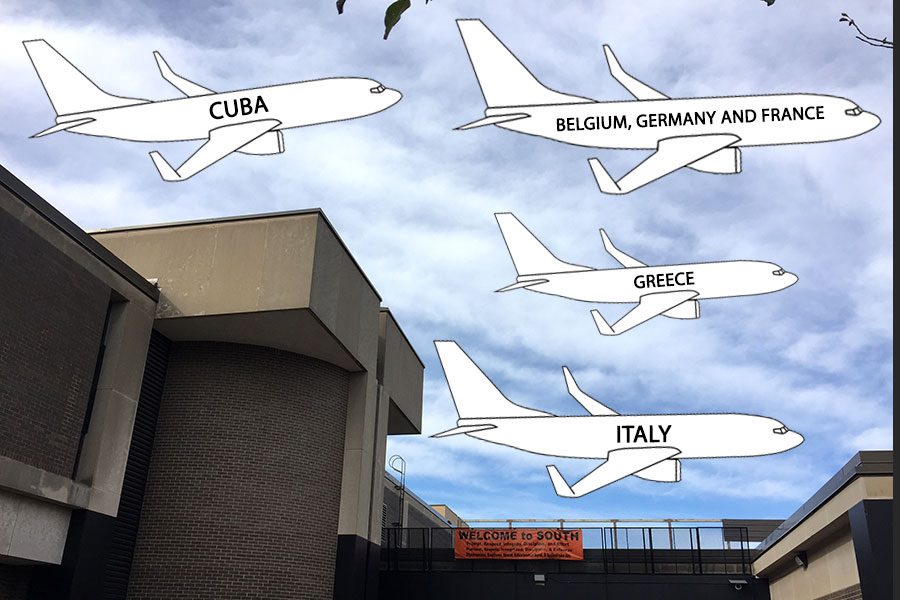 Graphic planes flying out of South's front entrance as students have the option on going to one of many trips abroad. “I think that kind of immersion and being in a country like that is really beneficial for language proficiency,” said junior Astrid Berger, who is attending a school trip to Cuba.

This year, South High students have more opportunities to travel abroad than ever before, with trips to six different countries. You could plan a trip to Cuba this summer, a voyage to Italy and Greece or visit World War II sites in Belgium, Germany and France. “It’s a really rich experience,” said South High French teacher Melissa Davis.

Some of the trips this year are more focused on language. Astrid Berger, a junior going on the Cuba trip, said, “I think that kind of immersion and being in a country like that is really beneficial for language proficiency.” Others are more historically and culturally based, like the World War II tour and the Italy and Greece trip.

On the trips, student can expect a mix of education and leisure. “We’ll be walking around city centers, museums,” said Macy Ashby, the coordinator for the World War II trip. “Some of the standard tourist attraction kind of stuff but mostly historical sites and some free time where we can choose what we want to do.”

During the Cuba trip, Berger is most excited for visiting a local school: “I think something I really want to think about as a career is language education so it’s really cool to see that,” she explained.

However, if you were planning on attending the South French trip that happens every two years, you’re going to have to wait until 2020 to get the chance for your next outing. This year’s trip was cancelled due to low numbers of participating students, though students do have the opportunity to go with Roosevelt. However, it will cost about eight hundred dollars more.

Overall the amount of students travelling abroad this year is low compared to years prior and the size of the student body.

Many trips are expecting around 10-18 people to sign up: “The typical number of students has gone down over the years,” said Davis. “Maybe that’s because of the other trips available, it could be for a number of reasons.”

The cost appears to be another thing deferring students: “My mom paid for half of it and I have to pay for the other half,” said Augie Wifler, a junior going on the World War II tour. Even though he’s splitting the cost of the $4500 trip, he’ll have to work for weeks at his part-time job to make up the money. Nonetheless, Wifler still thinks it’s worth it: “I want to go so I can learn more about World War II and go to Europe because I’ve never been before.”

The cost of each trip varies from around $2000-4500, and most include airfare and lodging. “It’s a lot of money but it covers a lot of things,” said Ashby.

The work for scholarships and other fundraising events are starting up as well. “We’re looking at doing similar things other groups have done like having restaurants pitch in a portion of their proceeds,” said Ashby.

The World War II trip is also being funded through the students. One mother is offering half the proceeds of her soap sales to the tour.