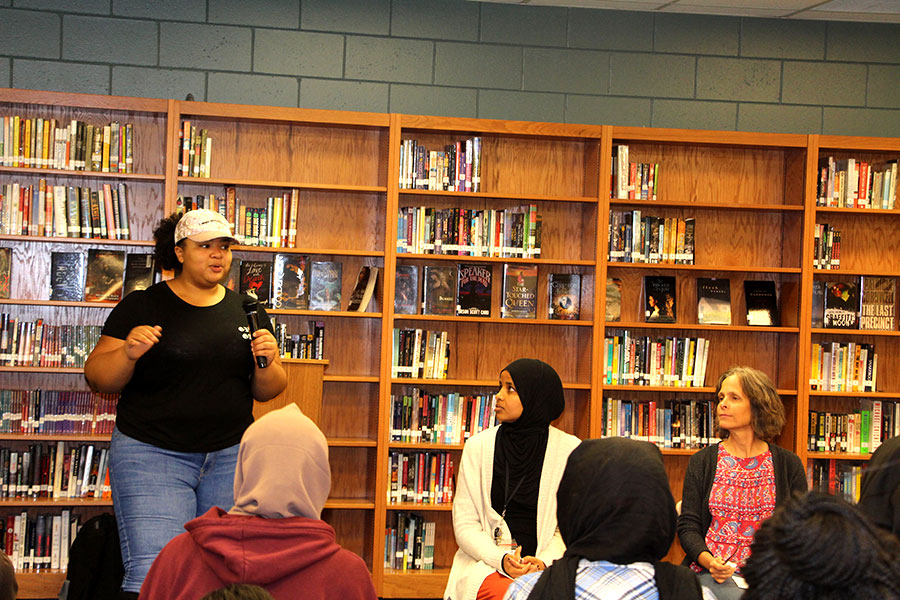 Speakers Marie Capra and Farah Abuqualbeen are introduced by student leader Mickey Edwards. SRC is excited for the new year ahead, as meetings get “bigger and bigger each time,” said Edwards. Photo: Gabe Chang-Deutsch

To begin the year, SRC invited therapists from the School Based Clinic to come in to talk about their experience in therapy and more specifically, therapy with high school students. SRC — or Silver Ribbon Campaign — is a student led organization that has biweekly speakers on mental health.

SRC is excited for the new year ahead, as meetings get “bigger and bigger each time,” said junior Mickey Edwards. SRC was “started very organically by 2 South students,” explained adviser Salma Hussein over email.

The speakers, Marie Capra and Farah Abuqualbeen, are the therapists that are seen through the School Based Clinic. In that capacity, they have seen many South students come through their doors to see them about anxiety, depression and other mental health issues. “Therapy is a conversation, it’s talking to someone…for help to overcome troubles and gain a deeper understanding of yourself,” said Capra.

When asking the gathered 40 students in the media center about misconceptions of mental health, one response a student yelled out was: “You have to be psycho to go to therapy,” or that you were weak for seeking therapy. The therapists said that anyone should seek therapy if “you’re having worries or sadness that are interfering with your school… and friends and family life.”

When asked about why they got into therapy, Capra talked about how when she was a student at South, she saw a therapist whose office was just down Lake Street. She was having mental health problems at that time, and she said the therapists helped her work through that. She became a licensed therapist because of the help she received and for the last 5 years has been working with South students.

Abuqualbeen took a different path. In her home life, she felt that mental health “was not really a topic to talk about [in her Somali community]” even while she was struggling with depression and anxiety. Because of this, she “works really hard to be culturally responsive.”

She did not major in therapy in college, but went on to become a licensed therapist. They both see therapy at South as a way to help 13 to 18 year olds, the age range whose second highest cause of death is suicide.

Edwards says that “SRC makes connections and gives you resources at hand.” There will many new speakers and opportunities this year. When asked how SRC changed South, she said she has seen SRC help “more students coming to find help.” SRC meets every other Wednesday at a rotating hour.