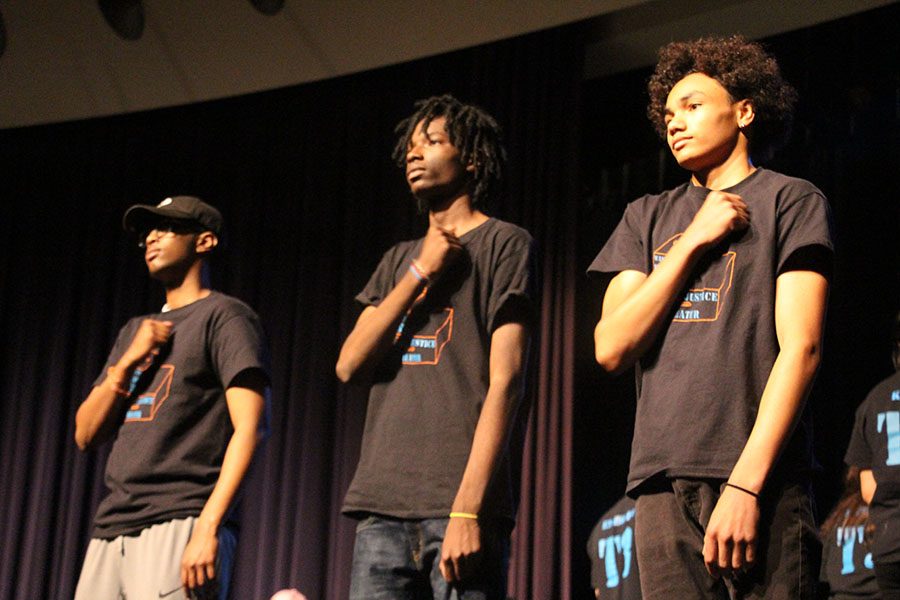 On Friday April 21st a group of Washburn students came to South to perform their spoken word performance called “This is Our Fight Too.” The group of students are in their third year of Washburn’s Black Box theater program, and they all worked together to create the piece. “This is Our Fight Too” plans to visit other other schools in the area and may be coming back to South for Racial Justice Day. Photo: Madeline Mahoney

This past Friday a group of Washburn students from the school’s Black Box program demonstrated their spoken word performance at one of South’s biweekly Friday Seminars. Black Box is Washburn’s theater program and it is made up of three levels. The show at South was put on by the highest level, T3.

The performance, “This is Our Fight Too” has been in progress for several months. “We’ve been working on it since the first day of class, honestly,” said Washburn student Maddi Orozco. The creation of the spoken word piece was a group effort. As Washburn junior Sharhan Mohamud put it, “everybody brought ideas… we all brought it to life.”

The impressive performance took place on April 21st during seventh hour lasted around 45 minutes. It was filled with discussions about discrimination, race, politics, rape culture, teen homelessness, gender, and sexuality. Using visually striking movements, powerful phrases and personal stories the performance sent a strong message to its audience. These messages included “love is love, love is peace, love is dating whoever I please” and “don’t criminalize me, don’t sexualize me.” (Unfortunately, at times, the messages were overshadowed by the loud audience.)

Many of the Washburn students felt very passionate about the issues they were speaking about. “I love this class, I love all the topics we were talking about, so I really enjoyed the whole time,” Orozco said. She added that during her theater experience she learned about a lot about other people’s experiences. Mohamud said, “being in theater for three years – it changed me as a person. That’s why I continue being in theater and let my voice be heard.”

Black Box plans to visit many other schools to share their work and even take a trip up to Duluth. They are also discussing the possibility of coming back to South for Racial Justice Day on May 17th if funding is available. Overall, the performance left a powerful impact both on its audience and those who participated. One of the theater directors, Crystal Spring, said, “I’ve learned that a lot of time youth have the answers that we are searching for.”