Girl’s basketball team swished the net in Semi-finals, but missed the game 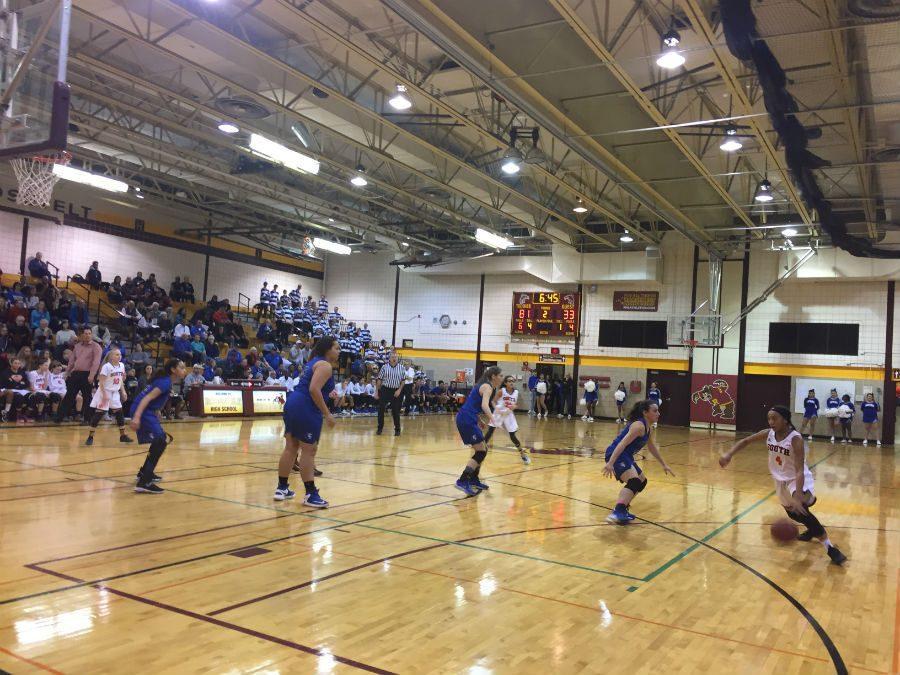 8th grader Jade Hill drives down the court to prepare to make a shot. South faced Hopkins, the number one team in the state, this Saturday in Sections semi-finals. Although South lost 85-42, the team was proud of the game and of the season. “We feel really good about the season, we won the conference without a loss, we got our first section win,” said Head Coach Nathan McGuire. Photo: Livia Lund

After a hard fought battle this Saturday, March 4th, against Hopkins, the women’s basketball team lost in Sections semi-finals 85-42. “We played the top team in the state that hasn’t lost a game all season, we knew that it was going to be tough,” explained Head Coach Nathan McGuire. The teams were more competitively matched in the first half of the game. “We limited their layups, [and] we made them earn their shots,” said sophomore Solana Cushing. As the game went on, South fell further behind.

However, many of the players view just getting to semi-finals as an accomplishment. “I feel like it was kind of an honor to play against [Hopkins] in the first place,” said freshman Maisy Johnson. Cushing agreed saying, “That’s the best team in the state and that’s what we want to measure ourselves to, and measure our practices to…[that’s] the level we want to be at because we want to beat them eventually.”

This season as a whole has been successful and unique one for the Tigers. Cheered on consistently by crowds made up of South students, teachers, and parents, the team won the city conference without a loss and won a section game for the first time in six years.  Winning that section game was one of senior Rose Lutz’s proudest moments of the season. “That was a big step for our program,” she explained. McGuire cites transition as being one of the team’s strengths over the season. “We’ve gotten really good at…knowing what each other is going to do…we get up, we pressure, we get a lot of steals and we convert and transition.”

Another strength the Tigers will have going into the future is the youth of their team.  With only two seniors on the varsity roster, the team has a lot of potential for success. “I think it’s tough now because of the inexperience but we are going to grow as a team and get older as a team, so I think that’s definitely gonna be an advantage in the next year or two,” said Cushing.

Although this basketball season is over, for many of the players basketball is a constant in their life. Some players like Cushing or Johnson will be playing or trying out for a club team. Lutz on the other hand, being a senior, is leaving high school basketball behind and will play at Macalester college next year. This has been a strong year for the tigers and all signs point to another amazing one next year.