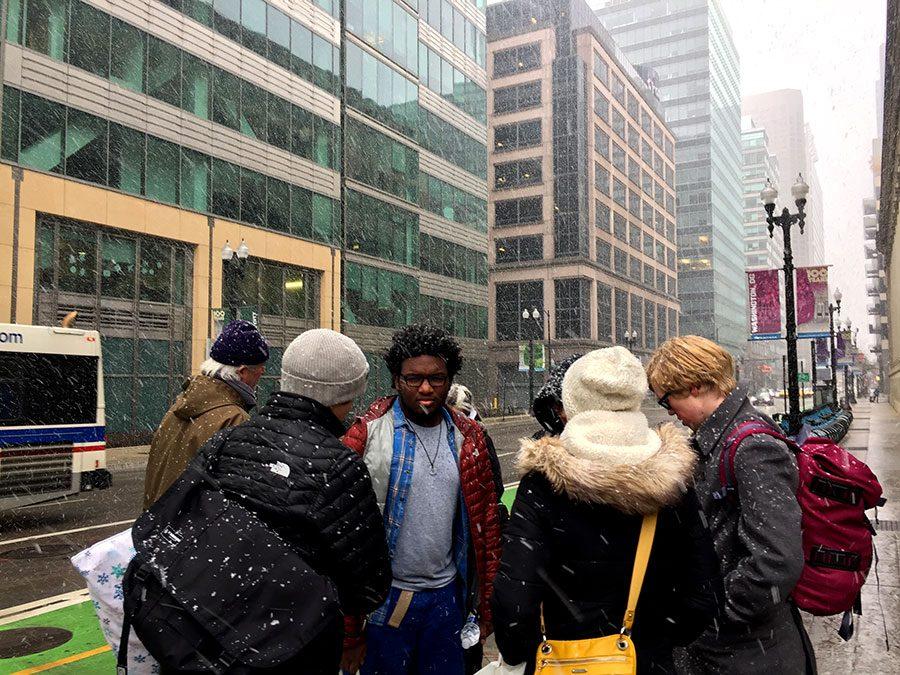 As the group headed back to their bus, light snow began falling on them. Photo: Eli Shimanski

Last Friday night as most people were settling into bed, a group of 20 German Club students were trudging through the cold and dark streets of Chicago, prepared to explore the city.

“This trip was set up as a kind of a perk for College in the Schools German students to participate in,” said Arthur French, South’s German teacher and one of the chaperones of the trip. “Chicago has a very large demographic of people with German backgrounds and every year the city of Chicago puts together something called the Christkindlmarkt which are Swiss, German and Austrian companies that come together and sell German Christmas themed hand crafts.”

They got to explore the event on Saturday night and it was a hit with the students, like sophomore grader Ryan Rosillo who said that “The Christkindlmarkt was the most exciting thing [from the trip] because it was an interesting look into German culture.”

That afternoon the group also got another look into German culture when they went to Berghoff’s, a historic restaurant located in the Chicago loop.

An additional reason that the attendees were excited to go was because of the freedom that the students were given to explore the city, such as senior Antoine Ferguson who was “excited for a little time in the city.” This included seeing things like the famous Cloud Gate sculpture at Millennium park and the Shedd aquarium which borders Lake Michigan.

French thought that the trip was successful, and was impressed by how responsible the students were, saying: “The kids were really well behaved, they were very mature. It wasn’t a lot of work to be a chaperone because everybody met their meeting times,” and jokingly added: “I never got a phone call about hotel behavior or anything like that so the group was delightful.”