Students sit-in for justice for Jamar 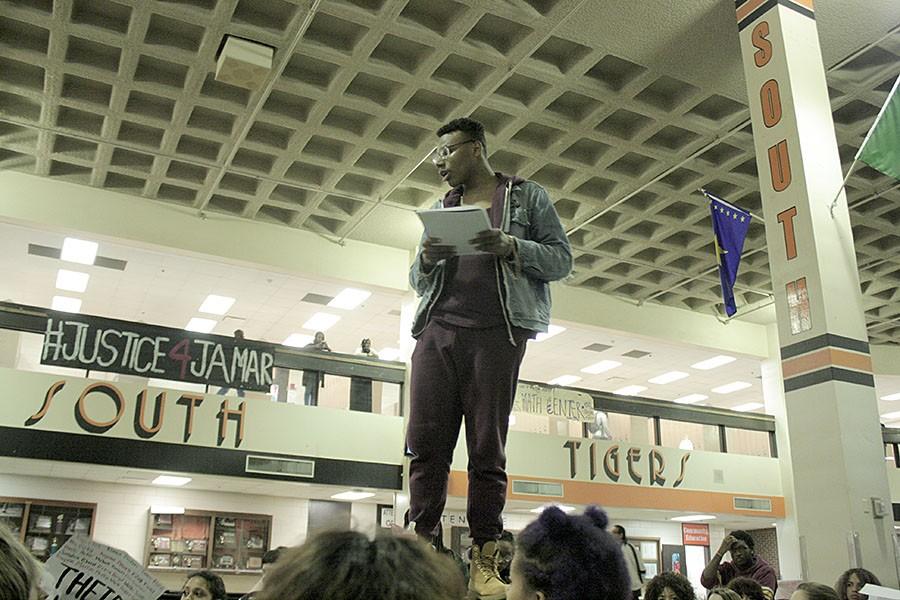 Senior Kyheim Abdul shares her thoughts about the non-indictment during the discussion portion of the sit-in. Photo: Livia Lund

Students from SUSOSH (Stand Up Speak Out South High) organized a sit-in Tuesday, April 5th during seventh hour to respond to the non-indictment of the police officers involved in the shooting of Jamar Clark. They first gathered in the hallway across from the main office, sitting down side by side while singing, “The day’s gonna come when I will march no more.”

SUSHOSH leaders brought the group of students into the commons, where they sat down on the ground. Senior Betty Mfalingundi led the group in 61 seconds of silence, to represent the 61 second-long police encounter that led to Jamar Clark’s death. After the silent moment, Mfalingundi responded, “That was beautiful. Thank you.”

The sit-in allowed a large group of the school to come together in a way that they wouldn’t have been able to in their seventh hour classes. As students sat down one by one in the commons, they conscientiously involved themselves in a discussion about race. One of SUSOSH’s goals is to involve every student in discussions about race, although they may feel uncomfortable about it.

“I feel that things won’t change unless we keep doing these things. What we’re doing today is a change in the positive direction. Since we are marching around the school more people are involved,” said Dominique Tapplin, a senior who participated in the sit in.

The discussion gave students the chance to speak to a large percentage of the school about their feelings surrounding the outcome of the case. “I feel confident in South and in SUSOSH after hearing what everyone said,” said Quinn Williams, a freshman who took part in the sit in. “I know I’m not the only one who has these thoughts,” she added.

Though some students believed that teachers were not permitted to talk about the Jamar Clark case, teachers were actually sent an email advising them to “refrain from offering personal beliefs” on the situation.