Students walkout in support of South’s All Nations program 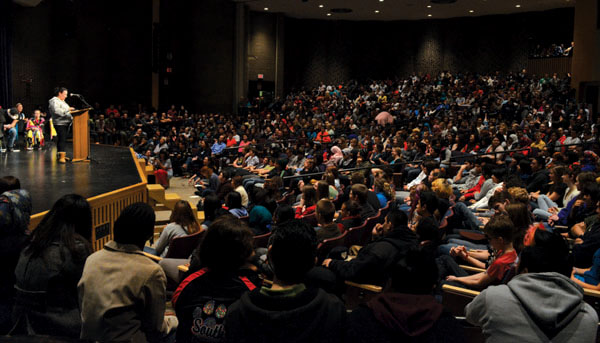 On March 11, hundreds of students filled the auditorium to support the All Nations Idle No More protest. The auditorium featured student testimonies,

Senior Winona Vizenor organized the first Idle No More youth movement. Idle No More is an international movement for Native American rights. They began in Canada with a group of First Nation peoples protecting their land and water rights.

Vizenor’s reasons for organizing the protest are that the All Nations program is “not being represented by South High School… we feel judged.”  All Nations groups have been forced to stop their drumming, a cultural practice for unity, due to noise complaints.

“Yet South is known for their music program, [a contradiction] which I find ridiculous,” said Vizenor.  They also have had to stop smudging, a cleansing ceremony that involves burning of sage. There have been complaints that the smell is similar to that of marijuana, a comparison that Vizenor denies validity.

“We want to show the school what exactly we’re about,” said Vizenor. The All Nations program hopes to gain as a result of this protest a cultural mediator and a coordinator.  Vizenor explained, “The way we learn and the way we are is different.”

Since boarding schools in Vizenor’s grandmother’s time, school has been a means for the white culture to replace that of Native peoples. Vizenor hopes that they can incorporate their culture with education, the goal of the All Nations program. An All Nations coordinator would be able to put forth the time and effort required to manage such a program and would give them representation among the administration.

Vizenor added: “We’ll speak for other cultures… It’s time that we come together.” The All Nations community is not the only group who has suffered from the lack of cultural awareness in our school. On Friday, Vizenor said that her goal is for “Everybody to feel comfortable speaking out [at the protest], not just All Nations.”

Last Friday, the school began working with Vizenor to change the Idle No More from a walkout to a cultural demonstration within the building. They also offered cameras and a means to stream the events into classrooms all over the school. Vizenor expressed her concern that this offer was “their way to control it, bring it down.”

Yet after a meeting on Friday with allies throughout the school, the protest group agreed to accept the two hour window the administration gave them for use of the commons and the auditorium.

Today’s protest began according to the administration’s plan. At 9:00, students who wished to attend were dismissed from class to the commons.  In the commons, there was a round dance and a group smudge. Then students poured into the auditorium. Students filled the seats, sat on the stairs, and crammed into a sitting mob on the floor lining the stage.

Following the presentation, Vizenor called the superintendent and Principal Cecilia Saddler onto the stage to respond with their thoughts. Said Saddler: “This is what South is about… We have a lot of work to do.” She also took responsibility for the stagnation of the All Nations program.

Following the presentation, Vizenor took the stage once again and called for a walkout.  Later, she explained, “The school didn’t know we were planning on walking out, we felt that it [the presentation] wasn’t enough. People were not being allowed out of their classes, people were not being allowed inside [the auditorium] because there was lack of room.”

The walkout was short. An estimated 700 students filed out of the building and participated in another round dance. The group filed around the block chanting “Idle No More!” and a few students escaped to their cars. The square around South was closed for the protest by the police.

Students seem to have found the demonstration successful. “I think that it’s really important for that our school to incorporate cultural education and that the All Nations program gets what they want,” said junior Shira Breen.  She continued, “I definitely feel like change is going to come out of this. I feel like it’s really hard to ignore hundreds of students walking out of the school.”

S.t.a.r.t. adult ally Kate Towle said: “In many ways this is a dream come true for me, to see students come together to promote inter-cultural awareness as a student body… it’s an opener for more conversation.”

Students looking to get involved should attend the s.t.a.r.t. dinner on Wednesday, March 27th.  The dinner will once again be student-led, but Native American author Diane Wilson will be present for the conversation.