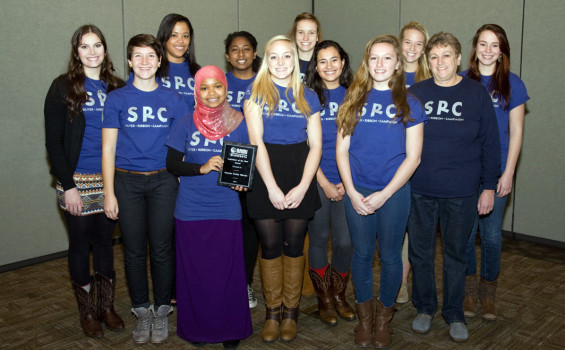 South’s Silver Ribbon Campaign won the Anti-Stigma award from the National Alliance on Mental Illness in St. Paul on November 3.

The Silver Ribbon Campaign, or SRC, is a student-run organization that was started in 2003.  The group meets bi-weekly and many students attend their events, which mainly comprise of special guest speakers.  The group works Eva Neubeck, a social worker at South, as well as an advisor from the National Alliance on Mental Illness, or NAMI.

NAMI is a self-described “non-profit organization dedicated to improving the lives of adults and children with mental illness and their families.”  They hold an annual conference in St. Paul, where the organization gives out awards to individuals and groups that help raise awareness and improve the public opinion of mental illness.  The Anti-Stigma award that was presented to South’s SRC is in recognition of their “outstanding efforts to reduce stigma that leads to discrimination, shame, and hopelessness.”

“We felt really good because we were the last award that they gave out, and we got a standing ovation,” says Clara Schultz, current co-leader of SRC. “It was kinda crazy, just how much other people, especially adults, think that SRC is just such a ridiculously good thing.”

According to Neubeck, this is the first time the Anti-Stigma award has been offered to a group by NAMI Minnesota, and marks the positive impact SRC has on South’s community.  Schultz sees it too, and realizes how much things have changed for students like her.

“It’s primarily the meetings that they hold,” she says.  “At a meeting kids can ask questions, kids can feel comfortable with the language, they can feel like the subject is one that we can talk about without being afraid.  And they can look around the room and say, ‘Wow, all these people are somehow affected by mental illness.’”

The group, which started out at just a few members in 2003, has grown immensely over the past ten years.  In fact, due to a record number of 267 students at a meeting last year, SRC has capped meetings at 150 attendants, and relocated to the media center.

As the advisor for the group, Neubeck feels that SRC is doing all that they can to reduce the stigma against mental illnesses at South.  “I think that if they can sustain this, and continue to make mental illness something that everybody knows about, that’s sort of the maximum effect.  That South high school is a place where people feel safe.”