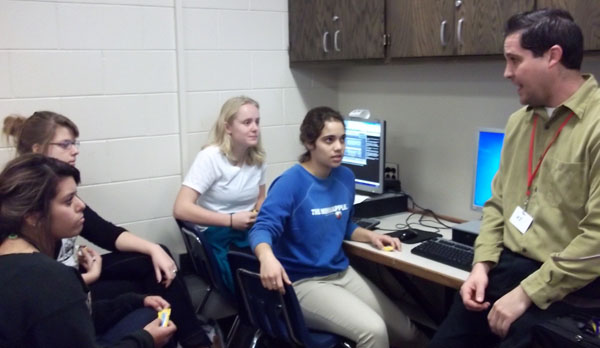 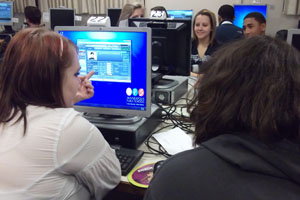 Junior Achievement has been working with South since 1997, according to Government/Economics teacher Richard Nohel. Every year junior-level Economics classes get to play JA Titan as a sort of final project for the semester, since the game simulates the real world of economics and business.

This year they have a new partner, DeVry University in Edina, primarily a business and tech school that uses hands-on learning. Sherrie Leichtnam, who works in the Office of Undergraduate Admissions there, said that play-offs for the winners from each class that played the game in computer labs yesterday will most likely be hosted at DeVry.

About 10 years ago, a couple of Harvard students created a game to serve as a hands-on learning experience for those interested in business. In the game, the player is trying to sell a product. The goal is to “gain the most customers and sell the most product,” said O’Hern, by manipulating things like advertising, price of the product, supply, and other factors. The game is free for teachers, and for anyone else. You can play the game here for free.

Junior Misrak Teka, whose team won in Nohel’s 4th hour, said her team’s strategy was in research. “I learned the importance of taking Economics in high school,” said Teka. She said that “for people who want to go into business, [the game] shows their competition.”

For Luci Holte, a winner in Nohel’s 2nd hour, the game accurately portrayed the ‘real world’ except that it was on a “smaller scale, with less crazy random variables.”

George Thome, whose group won in Nohel’s 5th hour, appreciated the hands-on learning approach. he said it was “more fun than talking about [economics], more interactive,” and that it was “entertaining, it was fun to be competitive.”

O’Hern said the game “promotes entrepreneurship, financial literacy, and critical thinking,” as well as teamwork, because in class, students have to work with at least one partner. Also, O’Hern said he hopes the game shows “the fun in economics, it doesn’t have to be dry. That fun part gets lost in  lot of academics.”

Nohel said he hopes that students got from the game “an understanding of what business is like, the risk and luck involved,” and that they “make a connection between what [they] learn in class and the real world.”

Teka said one thing she learned was “that I will never be a business person.”