All Nations program engages in hands on learning with tree tapping 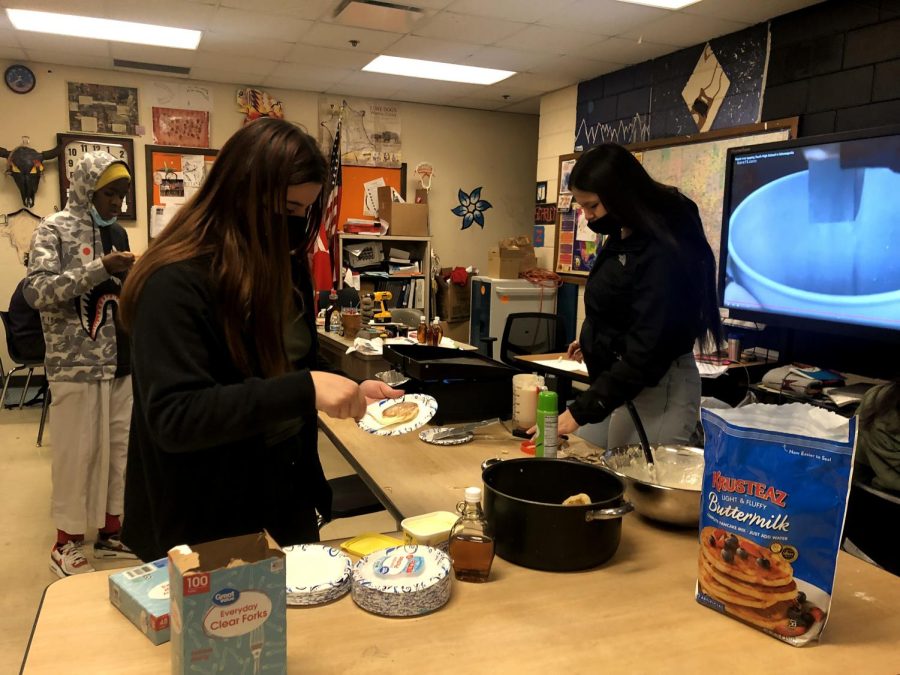 The All Nations program has been collecting syrup from maple trees around South. “It’s engagement from cultural learning, understanding biology, it’s interdisciplinary… Also the nutritional power helps power kids, helps get them going in the morning,” said teacher Vincent Patton.

Walking into South’s All Nation rooms, you may often smell wafting boiling maple syrup and fresh pancakes. The South All Nations program has had a long history of providing interactive learning experiences that connect students to traditional Native practices. Recently, students have been collecting syrup from the surrounding maple trees of South High. This practice has helped engage them with their own cultural heritage, as well as learn about the biological and physical process of tapping the trees.

Native, specifically Ojibwe peoples have long been tapping maple trees for syrup. The spring season is ideal for tapping, as the weather stays above freezing during the day, and falls back below to freezing at night. To tap the trees, small holes are drilled into the trees, and a vessel for the sap is provided to drip into. The syrup is then boiled down to a more concentrated form. Not only has this process become a dietary staple, it is a vital part of the overall culture of the Ojibwe people.

All Nations teacher Mr Patton believes strongly in the importance of hands-on learning for his students. “The whole idea of going out into the real world to learn has impacted our students greatly,” he remarked. Tree tapping is not where it ends for hands on, cultural experiences for All Nations students. Students participate in two camping trips a year, fishing, and a buffalo hunt among other activities.

The data also reflects that experimental learning within the All Nations program proves effective. As of 2015, the graduation rate for Native American All Nations students was 25%. This year, about 70% of students are projected to graduate.

When the practice of tapping maple trees around South first started, there was considerable pushback made by the City of Minneapolis’ Park Board. The Board immediately stopped the process when they found out, as the tapping was on the boulevard, land that is technically owned by the city of Minneapolis. Mr. Patton urged all students to write emails to the board urging the board to let them tap the trees.

It was suggested that the tapping should move to the cemetery close to South, although this was not ideal. On the process, and pushback to that idea, Mato Thompson, South All Nations student remarked; “it was more like going out and tapping anyways so that we could… get it changed.”

Eventually, the issue was resolved and the board let South students use the land to tap trees. “It was an easy win and a good learning opportunity,” remarked Patton.

Partially from the city’s pushback against tapping, more recognition of South’s tapping process rose. Local news station, Kare11 documented it in a recent story, which you can read here.

Patton believes in this process strongly. Not only has he been tapping trees on his own for most of his life, he strongly believes in the numerous benefits of maple tapping. “It’s engagement from cultural learning, understanding biology, it’s interdisciplinary… Also the nutritional power helps power kids, helps get them going in the morning,” he remarked.

The effects that simply tapping a few maple trees for syrup can have upon such a wide range of people is striking. Thompson observed, “I learned [from the process] that change is hard, it’s hard to get other people to change their ways. But sometimes it’s for the better. A lot of people can thrive off of it.”