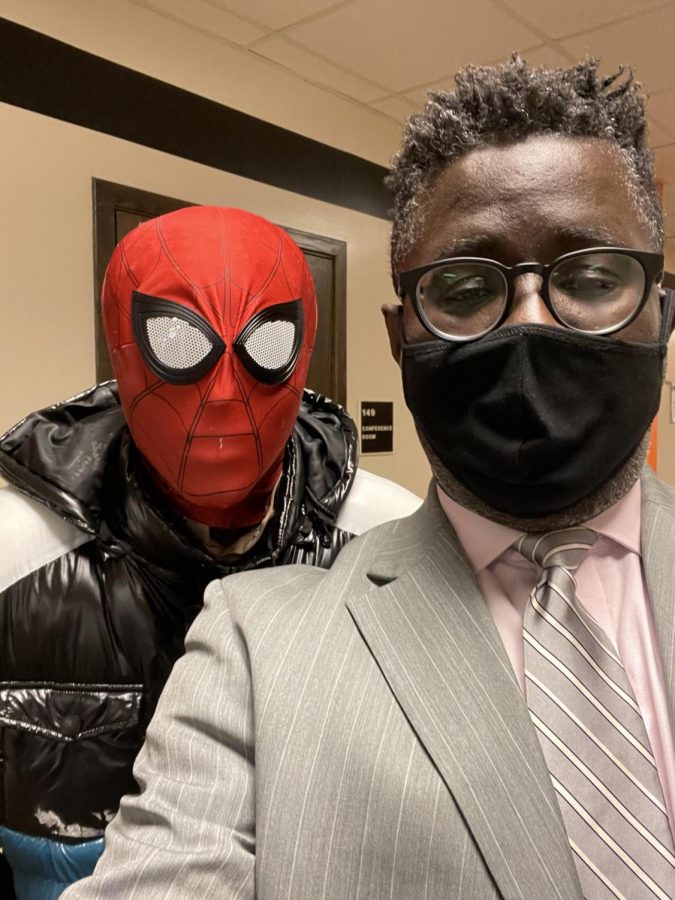 On Monday December 6th, South underwent yet another leadership change with the switch of interim principals between Mr. Stephen Simondet to Mr. Michael Luseni. Luseni is to remain interim principal until further notice, as the search for a long term principal will embark in the spring.

A familiar face to some at South, Luseni started his career as a support staff before moving on to become a teacher at South. He furthered his career in Washington DC, working in special education services at a charter school, as well as at Jefferson Community School before coming back as an Assistant Principal at South from 2015 to 2017. He then moved on to become Principal of Heritage Academy, and is now taking a break from that to take on the role of interim principal at South.

Luseni stated that he thinks of South in a special light, because his teaching career started here. “The call to come here was pretty humbling, because I’ve always considered South my home… so when a call came it was an easy answer. It wasn’t a, ‘let me think about this for two days.’ It was a ‘yes, I gotta go.” Luseni states.

The state of tensions in which Mr. Luseni has entered at South is high, and has been growing since the beginning of the year. The return to school after almost a year and a half of distance learning, the resignation of Brett Stringer, and multiple changes in administration have been factors of stress. These factors and many more have impacted a rising sense of tension at South.

These stressors and tension between administration and students has surmounted to multiple incidents in the past months. On November 15th, multiple fights broke out resulting in a code red being called, and restraints continuing for the rest of the week. On December 7th, Luseni’s second day, there was another incident, involving a student pulling out a gun in school premises.

There was a considerable amount of backlash to the way that administration has handled the situation of a weapon being pulled out at South. An announcement was made in the form of a phone call and email sent out to students and families the night of the incident, although nothing was stated during the school day. The facts that are known about the situation are still minimal, although it is apparent that the student with the gun left of their own accord 5 minutes after staff were informed of the situation.

The situation came to be noticed by students, who contact parents outside of school. There was a post on a crime watch page on social media which alerted many of the situation. The school only became involved in spreading the information later.

On the situation, and how it was handled, Luseni remarked, “[There is] a lot of pain out there. I want the community to know that I will do my best to make South a safe learning environment. I would like students to say something when they hear something [in order to] have more robust support in the building. We will get through this together.”

This has not been the only situation that has faced retaliation at South. There has been a significantly more rigid system of ideals that have been produced this year in wake of violence and intrusions. “South, in my mind … cannot have discipline policies that are rigid. It would make the adults feel better, but at the end of the day, it doesn’t really work the way people expect it to.” said Mr. Luseni on his take on policies.

Although, Luseni is in favor of some semblance of punishment. He remarked, “are we going to suspend when kids get into a fight? In some instances, yes. But I think my focus is not on the consequences and the strictness, but everything that leads to that.”

Along with the listening sessions, Luseni has claimed that he will be committed to restorative work at South High coming up in January and February that is led by the Legal Rights Center. On this matter, Luseni said that he aims for this restorative work to be somewhat a return to what restorative work looked like at his time at South. This would look like having someone dedicated specifically hired to work on restorative action.

Upon Luseni’s arrival, this means that Stephen Simondet is stepping down from his role of interim principal and returning to being assistant principal. Mr. Simondet has worked with Luseni previously, and believes that he will do a “fantastic job” as assistant principal. Simondet said, “I’m 100% supportive, he’s going to be really good for South.” Still, he wants students to know that he will continue to be a familiar face at South, “I really enjoyed working with kids at South, and I get to keep doing that. I’m excited to (continue to) be here,” Simondet said.

The search for a long term principal will likely be under way sometime in the spring. This process will include Dr. Shawn Harris-Berry, Luseni, and the school site council to find a new leader. It is the hope that before the end of the year there will be a long term principal hired for the fall.

When asked about the key components to consider on the search, Luseni remarked, “(Some) of the things I’m really keen about is a consensus builder, someone who is transparent and a communicator. Those three things are pretty loud, you can’t miss them.”

Although Luseni is not here to stay as a long term principal, he does not doubt the strength and resilience of South. “We are South, we are going through a transition now, but we will be okay,” stated Luseni.