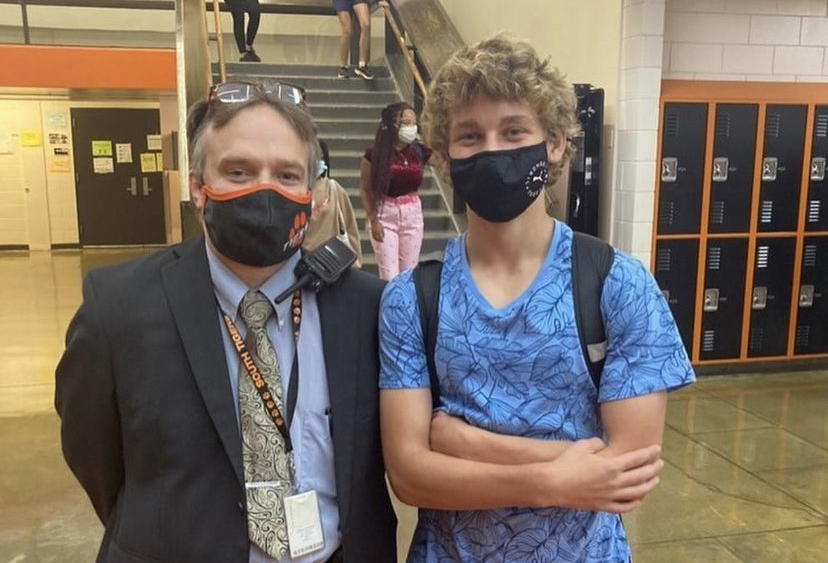 Parody accounts have impacted the environment at South in various ways. Two of the biggest accounts are “South High Protector,” which imitates Principal Simondet, and “Sneaky Flicks,” which takes pictures of students in the hallways of South. Credit: @south_high_protector

Over the course of the first couple months of school, various social media accounts have popped up at South for entertainment purposes. Ranging from candid pictures of students in the halls to parody accounts of staff members, the accounts have been equally interesting as they have been controversial. They’ve left the student base entertained, but the prior question remains: what will the consequences be, and what have they been?

The first account to gain prominence was the “southsneakyflickz” page, with an idea that captivated South students. There was an immediate fervor surrounding the page; monitoring who appears on it, earning an appearance on the page, and the all-around spectacle surrounding the account. Quickly, as the page avoided the widely expected school crackdown, the boundary was blurred, and more accounts were created following the success of SSF, and the phenomenon even spread from South to other schools.

SSF began humbly, as just a venue to upload funny candid pictures of friends and acquaintances. ”I created this account because of the diabolical licks trend and also I took a couple flicks of my friends in the halls and someone suggested I create an account dedicated to it,” said the administrator of the account, who remains anonymous. The addition of submissions also assisted the account in its proximity to South students.

Inevitably though, this spectacle died down progressively. From October 15th to November 11th, the account did not post at all.

Another account that has captivated the school is the South High Protector account. The account plays a key role in the transitional period between former Principal Stringer and current Interim Principal Simondet; creating a parodical “alpha male” persona around Simondet. The account, if viewed optimistically, has created a much-needed student/staff relationship amidst administrative instability. If viewed pessimistically, it has blurred the lines of that relationship, which could have various repercussions for a school environment that has various flaws as-is.

On the topic of the relationship between the account and Simondet, the administrator holds an optimistic outlook. “I don’t think anybody has developed negative feelings towards Simondet because of the account, he’s the protector y’know. Even though the account isn’t [run by] him, he gets positive attention and a good rep. If there was a brand new principal who didn’t have a connection with the students, it’d be a very different environment at South, and I think this account has created somewhat of a connection there,” said the SHP administrator, who is also remaining anonymous.

The obvious obstacle has been Simondet’s opinion of the account, which has been somewhat publicly ambiguous thus far. The account has avoided major controversy or administrative action, partially due to the administrator’s philosophy on running the page. “If people gave a valid reason for it harming someone, we’d shut it down. And if Simondet came up to us and asked us to take a certain post down, etc., we would. Our guiding rule would be just to avoid harm and keep everything playful and creating connections,” said the admin.

The account has also intentionally avoided anything too provocative. “When we first made the account, we just thought as long as we kept out anything explicit or sexual(…) we wouldn’t really get in trouble. We just didn’t want anybody to be harmed.”

In an email to the Southerner, Simondet put his opinion bluntly: “I do not support any social media accounts centering on me.” Closing the gap between staff and students and poking fun at staff is no new concept, and it certainly is not unique to these accounts. Yet the question remains: may these accounts be exacerbating that dynamic?

“I think that there is something to say, along the lines of whether it’s appropriate to be chastising staff that way. And I think that if students running the account were ready and willing to hear about if that did negatively impact somebody, beyond if they were getting in trouble about it or not, it would help,” said Alex Endeshaw, on the potential of long-term accommodations the accounts could make to create sustainability.

Clearly, there’s room to improve, but Endeshaw is mostly unphased. “Have they exacerbated issues that already existed? I don’t believe so. I honestly don’t believe that it really leans into that, because I think this is what kids do, you know?… I don’t think that it was a design with malice even,” said Endeshaw. When it comes to cracking down on students in the context of overstepping boundaries, the staff isn’t prioritizing these accounts. “I think that those accounts wouldn’t even be where we’d start.”

While the accounts have been mostly friendly towards the principal, the lack of engagement between the administrators and Simondet could pose issues for the account long-term. While Simondet has voiced concerns, he has largely been friendly towards the environment it has created surrounding him; he can be seen taking photos with students, which usually are submitted to the account daily. “If you want the account to keep going but you don’t want to rub anyone the wrong way, then I think that you’ve got to engage with Simondet around that,” said Endeshaw, delineating a clear need for communication. Yet nonetheless, it could be worse: “I think it could easily be much more problematic, and a lot more painful for Simondet to go on that page.”

And perhaps, these accounts could be reflective of a dynamic that exists at South in a more positive light. “Well, and my thing is, right, it might not be intentional but regardless of intent this speaks to the fact that, do we need to be six foot eight intimidators to protect this building? And what does that say about this culture,” said Endeshaw.

The ideal scenario seems to be further communication and discussion, and the connection-building aspects of these accounts survive without overstepping any boundaries of the student-staff dynamic.