And Stringer’s reasoning for being unable to complete his license 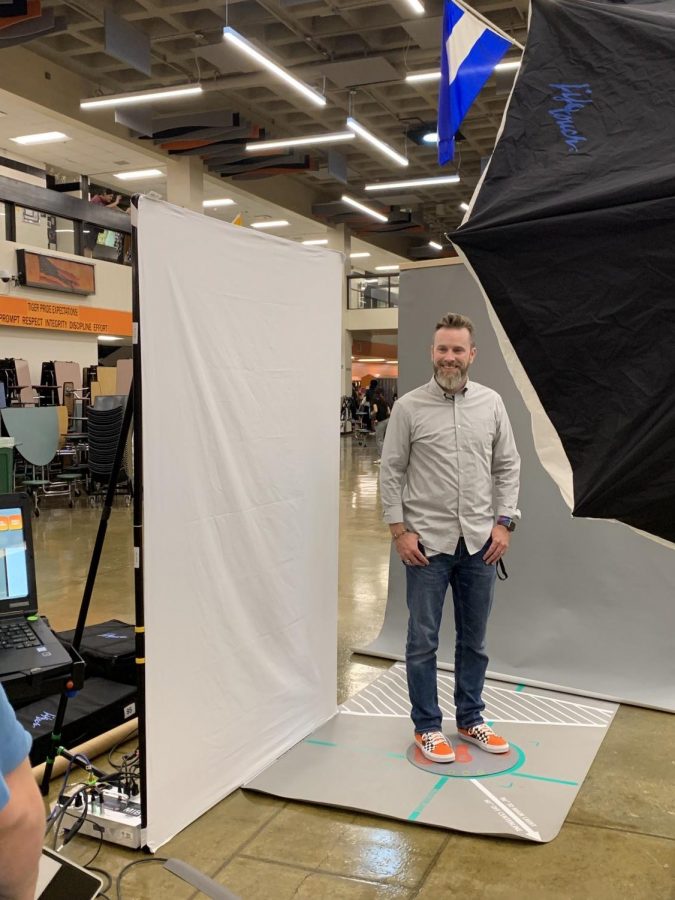 This image was taken from Stringer's first year at South. Within his two years at South, Stringer developed relationships with students, staff and community members. Inevitably, some were good and some were bad. In light of his recent resignation students and staff reflect on their interactions with him and the reasons behind his resignation.

Disclaimer: the authors of this article attempted to reach out to as many members of the community as possible, however many did not feel comfortable speaking or preferred to do so anonymously. We have done our best to honor these requests.

The South community has been left reeling after Brett Stringer announced his resignation as principal. Students and staff alike are still processing this news and the possible positive or negative repercussions it will have on South.

Prior to his resignation, Stringer was issued a temporary two year provisional license at the beginning of his time at South in 2019. This provisional license gave him time to complete coursework required for a permanent Minnesota license while serving as the principal of South. However, Stringer didn’t enroll in a university before June 30th, when his provisional license expired. The Board of School Administrators (BOSA) is in charge of managing the licensure of administrators throughout Minnesota. BOSA was tasked with making the decision whether or not to accept Stringer’s request for an extension to the temporary license and an additional year to complete the required coursework. Stringer resigned on October 24th, the day before the decision was to be made.

Steve Simondet will assume the role of Interim Principal for the remainder of the school year. According to a recent announcement released by MPS, the search process for a new principal will begin in the spring. The announcement, from MPS Associate Superintendent Shawn Harris-Berry, also cited Stringer’s reason for leaving, “Brett Stringer has decided that he should relinquish his leadership role at South. He is deeply committed to the school and of the progress you all have made together during his tenure these past two years, but the unity and stability of the community is of most concern to him.” Stringer had not been in person at South for the month leading up to his resignation. He had been reassigned by Minneapolis Public Schools to the Davis Center.

Within his two years at South, Stringer developed relationships with students, staff and community members. Inevitably, some were good and some were bad.

During his time at South some students felt Stringer was not present in day-to-day life at South, and others didn’t have interactions with him at all. Senior Frey Abera said that she hadn’t had much interaction with him so his absence hadn’t really made any difference to her. “I don’t think I’ve even seen him that much, and like the school and I haven’t really had any conversation with him so [his absence] doesn’t really affect me at all.”

Abera is not the only one who felt this way. Many students and staff of the All Nations program reciprocated what she explained. “He was asked by the kids, ‘we need to see you more,’ and a lot of things happened… but we haven’t seen him over here a whole lot in the last two years,” said an All Nations teacher. They say that as All Nations got used to it they developed their own program and community even though it is really easy for All Nations to feel separated from the rest of South. They added that they thought previous administrations had been very present in the All Nations program.

Many All Nations juniors and seniors said that when Stringer attended the 2019 Black Hills field trip, students didn’t know who he was. It wasn’t until he left that they were informed that he was the new principal.

Staff and students had other thoughts as well. One student felt as if Stringer’s relationship with the school weakened during the pandemic. Another felt as if he wasn’t as engaged with students in the halls. A teacher felt as if his communication skills could have been better. “I feel that he lacks a basic professionalism such as returning emails, and meetings and such. I don’t feel like he valued my voice to the same extent that he did those of my colleagues in the same meeting,” said the teacher. Another staff member mentioned that he was well intentioned, but often didn’t follow through with what he said, possibly a symptom of larger leadership issues within the school.

One thing that drew a negative reaction out of many students was Stringer’s apology letter to BOSA. In his letter, he outlined his reasoning for not completing the requirements for his permanent principal’s license on time. He cited both COVID-19 and George Floyd’s murder as reasons that he was unable to complete the coursework within the given timeframe. Stringer’s letter further explained that he had been acting as principal in extremely unusual circumstances. It said that he had focused his energy on the school and managing all of the transitions to online learning instead of focusing on getting his license.

This did not sit well for some students. One of these people was Hopa Stevens, a junior at South. “The only reason I did have a lot to say is that the fact that he used a black man who died as an excuse. It’s kind of like [as] a white man… he doesn’t really get to use that [excuse].”

Other students felt that the COVID-19 pandemic was hard for everyone, and since they had to attend school they didn’t see why Stringer couldn’t get his coursework done. “I lost family members during Covid, I still had to wake up in the morning for a class,” said an anonymous student who will be referred to as “N.”

Despite mixed feelings from students, Stringer emphasizes his point that he cared — and still cares, about South. In a recent letter to the Southerner, Stringer wrote, “My decision to ultimately leave South had nothing to do with not wanting to be there. I miss it dearly, but I’ve always believed in putting others first and what South needs now is to move forward. I have a tremendous amount of respect for the leaders and teachers at South. You are in good hands. It was good to see you, I love you and I believe in you.”

However, student “A” disagrees. A is a fake name as the student requested to not have their real name included in this article. A has read Stringer’s letter, but as a student at South they say that they hadn’t seen him do a lot to support the community during the pandemic and the aftermath of George Floyd’s death. “And you’re using it as an excuse to why you didn’t take any of your classes? With everything that happened, especially for students of color, I would say its just kind of disgusting and everything that he’s done this. I think that the fact that he used this as an excuse is the worse thing, one of the reasons I don’t think he should come back as principal.”

Regardless of students’ opinions about Stringer, his absence has led to a turbulent period at South. The absence of a long-term acting principal has been felt at South and has brought to light some ongoing issues. There have been more fights and arguments in the hallways since Stringer has left, and the current administration either does not have the capacity or management to handle it. “I feel like if you look from students’ perspective, I know a lot of students are taking advantage of the fact that we technically don’t have [a long-term] principal cause like we have way more fights and all that,” said N.

An All Nations staff member feels like teachers don’t have the authority to follow through on administrative tasks during these chaotic and abnormal times. “We really need leadership right now. We really need someone to come out and set the tone of the school… It has to be done in a way where we’re pulling people in and not pushing people away.”

This is one of the factors they hope is considered when the principal search process begins in the spring. Students also want more involvement in the hiring process of the next principal. They advocate for candidates of color, candidates who have experience working with diverse communities, and candidates who will be engaged with students. Students hope that the community will be more informed of how the process works and will have more input on the candidates.

Angelina Deluney, who is part of All Nations, said that she felt All Nations hadn’t been given enough voice in the last hiring of a principal. “We weren’t really on the board and we were not represented even though we do have a program, I feel like we should have been equally represented.” Stevens wants a principal who will be strongly involved with All Nations.

Stringer’s resignation has definitely left an impact on South, but students are looking for the next principal. This has given them an idea of what they hope to find in future candidates and the initiative to advocate for what the community needs. In the meantime South will continue to function as best as it can in these abnormal times.