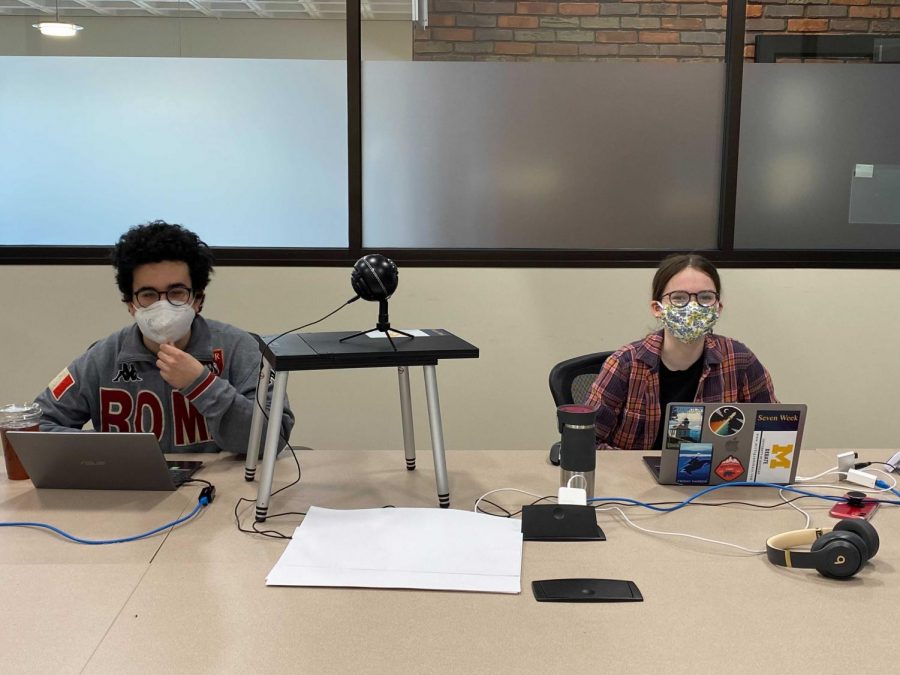 Gabe Chang-Deutsch and Clara Conry prepare for their third preliminary round at the 2021 Tournament of Champions. The duo has delivered impressive performances at several national tournaments throughout the year, including a win at the Blake School’s annual tournament, and a second win in a row at the Minnesota state tournament.

South’s very own #1 nationally ranked debate duo, junior Clara Conry and senior Gabe Chang-Deutsch, have capped off their historic season with another impressive performance at the 2021 UK Tournament of Champions.

The duo reached semifinals at the prestigious national event, an accomplishment only few debaters have reached. They ultimately fell to the eventual tournament-winning Bellarmine duo of Adarsh Hiremath and Surya Midha on a close, nail biting 2-1 decision. They beat multiple contending teams along the way, including the Baker award winning duo from North Broward, Akash Deo and Sebastian Rabbini, and the Caddo Magnet duo of Eleanora Lawrence and Austin Kiihnl, who were ranked 2nd in the nation earlier this year.

Individually, the two had major successes as well, with Chang-Deutsch placing as the fifth best speaker in a pool of 180 debaters, and Conry 18th. In preliminary rounds, the duo won five of seven rounds, securing the seventh seed going into elimination rounds.

“South has a really supportive atmosphere. A lot of the students will help you out when you need it and do work with you, and I also think we have a really amazing coaching staff, between our head coach Oskar Tauring-Traxler and our assistant coach Izak Gallini-Matyas,” said Chang-Deutsch. “They both really helped us out this year and put in a lot of unpaid hours, and their help was integral to our success.” He also thinks his experience with the program has taught him vital life skills and shaped his outlook on many things. “Debate allows you to read and think about some really high level philosophical concepts you’re not exposed to outside of debate. I think that really exposed me to new theories and political philosophies that I wouldn’t have been exposed to otherwise, which have changed the way I thought about the world,” said Chang Deutsch.

He continued, “Debate really teaches you research skills so you’re able to quickly and effectively research almost any subject you find interest in the humanities, and that’s really helpful, because when I have a question, I can do the research, find the answer to it, and find opposing viewpoints. And I think that kind of research will be really helpful as I get older, and I know it has helped me with my essays already.”

In an activity often dominated by private schools with abundant resources and funding, smaller public schools like South often lack the resources to compete on a national level. “I’d like to think [the team’s success] proves the possibility of coming from a smaller school and being successful if you’re willing to put in the effort. We definitely come from a smaller school, but I think coming from that background, we still have coaches that make it possible, which isn’t true for every school. I think it’s probably more significant to me and Gabe in the context of how much work you have to put in… It takes a lot more drive to become skilled.”

Regardless of this year’s success, the goal remains the same. “I think this year has [changed the way I look at debate] but not in a super fundamental way. The reasons why I do debate are the same, which are that I really enjoy it. Even if I hadn’t found as much circuit success I would still do the activity because I find it really fun and engaging. The bar I set myself for the quality of my debating… has gone up because I know I can get better based on the quality of my debating this year. That way, I can approach next season still focused on growing my skill based on what I know I wasn’t as good at this year.”

This coming fall, Conry will be embarking on her fourth and final year at South debate, while Chang-Deutsh will be majoring in Native American Studies at Dartmouth College and continuing his debate career at their National Debate Tournament-winning program.