South community reacts to the murder of George Floyd 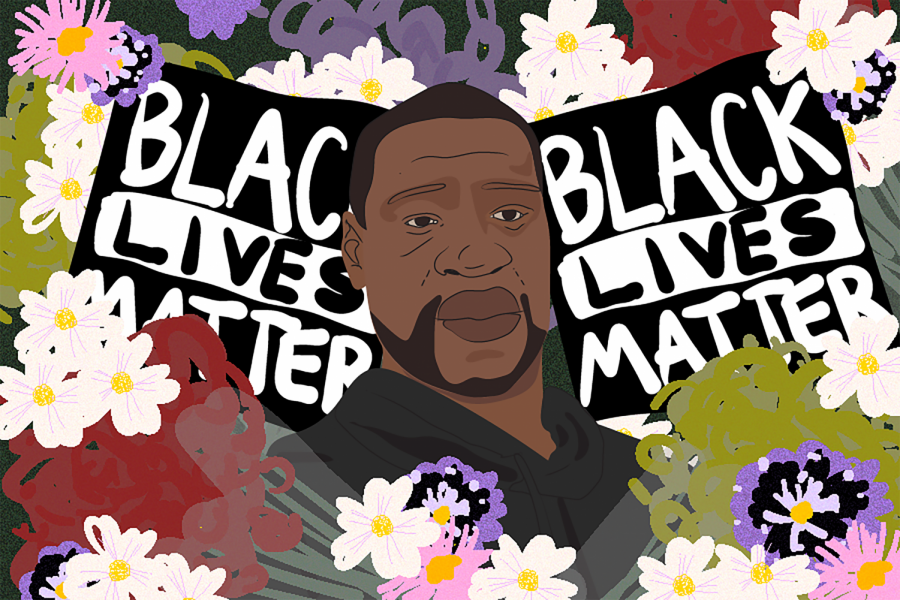 Monday night, around 8pm, police arrived at the 3700 block of Chicago Avenue in South Minneapolis. They had been called in because a local business alleged that a man had paid with a fake 20 dollar bill. That man was later identified as George Floyd, an African American man who lived in St. Louis Park. He was handcuffed and walked across the street where there were more officers. The scene quickly escalated, as a cop, who has been identified as Derek Chauvin, sat with his knee pressed on the non-resisting man’s neck for at least 7 minutes. His fellow officers, Thomas Lane, Tou Thao and J. Alexander Kueng, stood by as they watched, or assisted in holding him down, despite the fact that Floyd was not physically fighting back against the cops.

Floyd repeatedly told the officers that he could not breathe, and asked for them to please take the pressure off of his neck. Onlookers video taped and yelled at the 4 cops, pleading with Chauvin to let the man breathe. The officers ignored the concerns, and Chauvin continued to apply pressure to Floyd’s neck even once he was clearly passed out. By 9:25 Monday night, Floyd was pronounced dead by a Hennepin County Medical Examiner.

For many students and staff of South High, the murder of George Floyd was upsetting not only because there is now another name to add to the long list of Black men killed by police in America, but also because the murder took place only minutes from their homes. To feel safe in one’s community is something that should be expected. The murder of George Floyd has challenged that belief for the South community. “Reaching out to my friends and just us calling each other in tears saying ‘why do they keep killing us?’ and ‘why can’t we just exist without being shot?’… I’m sure a lot of people are asking the same questions right now and I’m sure a lot of us are feeling very unsafe right now in our own communities, which should never be the case,” Writer’s Room Coordinator Jeannine Erickson said.

As an immediate response to the news which became widespread on Tuesday, people broke their social distance after months of avoiding large groups, to demand justice for Floyd. Hundreds, possibly thousands, filled the streets where the crime happened, and then marched to the police precinct. The 4 cops who took part in Floyd’s murder had been fired, but the protesters argued that being fired is not enough; to truly hold cops to the same standard as any other citizen, the men need to be charged and convicted of murder.

Erickson wants to remind students that “if you did not go to the protest because you did not think it would be best for your safety, that is fine, especially Black students. You do not have to go to a protest to feel valid in your blackness. You being Black in America is literally revolutionary every day. Being Black and existing in white, racist America is literally you living your ancestors wildest dreams.”

For those a part of the South High community who needed a space to grieve, social worker Salma Hussein and Erickson facilitated a virtual healing circle for students and staff at 8pm Tuesday night. The meeting was much like a circle that many South High teachers host during in-person instruction, in which an intention for the meeting was set, a quote was read, and questions were posed. The purpose of the meeting, attended by over 60 people, was to give students and staff a safe place to grieve and openly talk about their emotions. “We really want to hear from everybody. We want to create a community of care and love… I hope that more people can feel comfortable to be raw, to be themselves, and to share how they’re feeling because through that vulnerability, we can build connections and really end white supremacy,” Hussein said.

The statement made by Erickson to open the conversation was “students, what happened to George Floyd is criminal.” Following this confirmation, the quote read to set the tone for the discussion was from Barack Obama. “Change will not come if we wait for some other person or some other time. We are the ones we’ve been waiting for. We are the change that we seek.”

Outside of the meeting, at the same time, the streets of South Minneapolis became divided, as protesters faced off with police in riot gear. Windows were broken, spray paint was used to write messages like “acab” (acronym for “all cops are bastards) and “fuck the police”.

In response, police used tactics like spraying tear gas, shooting rubber bullets, and throwing flash grenades. “Seeing lives on Facebook and the cops reacting violent towards people protesting makes me feel afraid,”  senior Carla Aranda Quiroz said. While the entire story of how the night got where it did is not clear, many feel that the aggressive tactics used by the cops were inappropriate, especially considering that other than rocks and cans, the protesters had no real weapons. In live streams, people can be seen struggling to see and breathe because of so much tear gas, as well as people with broken skin from being hit with bullets.

The discussion began with Hussein emphasizing this point to students, especially students of color: “You are loved, you are supported, you matter, you matter everyday.” Through the complex, hard feelings that everybody has at this time, the one thing that people comforted each other with through the discussion is that everybody, and everybody’s feelings and responses, are valid.

The closeness of the incident to many members of the South community was overwhelming for many.  “I was pretty overwhelmed… It was a lot to take in being so close to home,” said Alex Endeshaw, Souths equity and diversity coordinator. In the days since the virtual meeting, protesting has progressed into riots, leaving parts of  the South Minneapolis community unrecognizable, and creating mixed emotions for many.

“I think for anybody who is a person of color, it doesn’t have to be somebody who is directly related to you for you to feel the loss,” shared Erickson. Kelsey Clark, a school counselor, shared her personal story on the fear police brutality brings her. “Speaking from personal experience, I dropped my brother, who is a person of color, off at a barbeque yesterday for the holiday and I saw a cop driving by and I got nervous and wanted to go back and check on him,” she said.

”I figured he was okay, probably, but the fact that I had to think about that, or don’t have to but do think about that all the time, for myself and my brother…[tuesday morning] when I saw the article, before I even opened it, I caught my breath for a moment. Just hoping that I would never see his name, or somebody else I know.”

Students relate to feeling overwhelmed, and many also expressed fear, anger, and grief.  “It’s not so much hard to believe as it is tired,” Erickson said. People agreed, saying that as disturbing as it is, it is easy to feel numb to news of police brutality, because it happens so much. “It’s so disappointing but not surprising and it’s horrible how often cops get away with murder,” Aranda Quiroz said.

“I cannot imagine what others who are POC are feeling right now,” one student said in the google meet chat. Students expressed desire to be the best allies they can be, and were encouraged to read and research effective ways for white people to take a stand.

Multiple South teachers were also present at the meeting. To them, Erickson said, ”please take time to reflect on how you can show solidarity to your students, especially your students of color who are experiencing this event in especially traumatic ways.” Senior Rayna Acha encouraged teachers, especially white teachers to “do research, read a lot, and reach out.”

Social Worker Sheri Harris wants people to be mindful of the level of trauma that police brutality is connected to. “What I really thought about today and what is important for me to bring forward in all of my interactions with students, especially students of color, is to really be aware and understand the depth of trauma and how pervasive trauma can be,” she said.

“ Things that happen like last night to George Floyd, I can’t get it out of my head that we-everybody who watched that video-witnessed a modern day lynching…So, think about that and the impact and the depth of that kind of trauma that people carry with them all the time…That’s historical, that’s generational…” Harris continued.

Many teachers have acknowledged the event of Floyd’s murder, from the remind message sent out by english teacher Elizabeth Johnson saying “all my bipoc [Black, Indigenous and People of Color] students, I see you and I love you and I’m so angry,” to the 46 seconds (Floyd was 46 years old) of silence dance teacher Nancy Nair had at the beginning of virtual class, and many other google classroom posts expressing anger, grief, and extending their support to students in any way possible.

“I want you to know that I am here if you ever want to talk more about George Floyd, speak your truth, or share your real and valid thoughts and feelings about anything else,” one counselor, Lauren Young, said in an email.

For students struggling with their feelings regarding this traumatic event, and the protests that have followed, you are encouraged to reach out to your school counselor, social worker, or any other staff member who you feel comfortable with. “For students who wish to gather again, we whole-heartedly will facilitate and take action from you regarding topic, adult facilitators, and guests. This is a safe space for you. Please reach out to any staff member to make the request,” principle Brett Stringer said in an email to students.

If you are ever in a situation where a cop’s interaction with somebody seems like it may take a violent turn, video taping is a vital action to take. Stop, stay at the scene, and record. Interfering is illegal, but recording is legal and necessary in spreading the truth and getting cops rightfully convicted.

However, many bipoc say that when videos like the one of George Floyd’s murder go viral on social media it is not so much productive as it is traumatizing. The video needs to exist, but does not need to be flooding the screens of people already feeling the pain of the reality; Send the video directly to people who you feel need to be exposed to the reality of police brutality in that way, or add a trigger warning before the video.

To sign a petition and be guided in making calls demanding justice for George Floyd, go to www.justiceforbigfloyd.com

To view a collection of resources intended to educate white people on how to be effectively by anti-racist, go to https://docs.google.com/document/d/1BRlF2_zhNe86SGgHa6-VlBO-QgirITwCTugSfKie5Fs/preview?pru=AAABcoBW2DE*Pk09UoD7QzolZsDR55tdGA

To learn more about the vision of a police-free future and how to achieve that, go to https://www.mpd150.com/

To support and donate to Community-Led Safety Solutions (rather than police involvement) in Minneapolis, go to reclaimtheblock.org