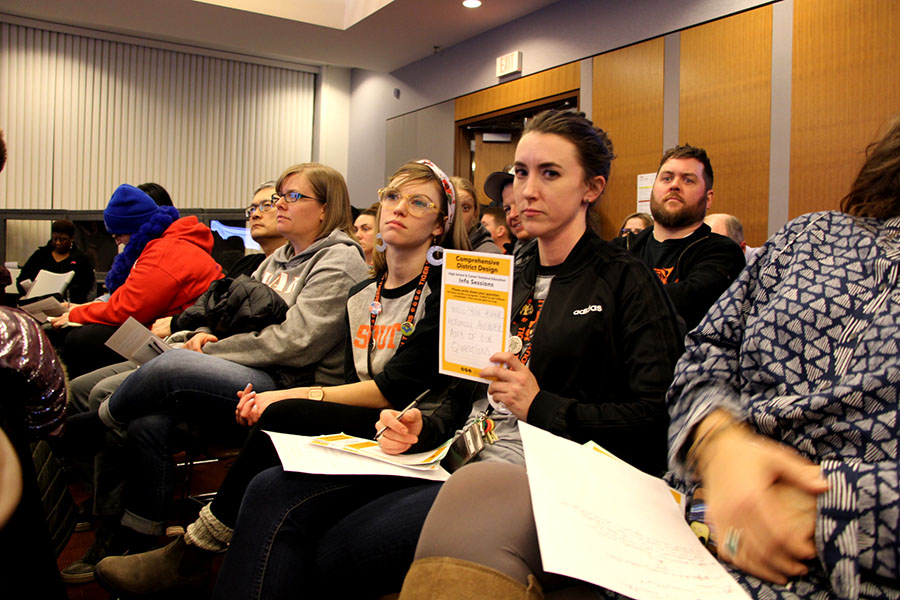 On Wednesday, February 26th, MPS hosted two information sessions at the Davis Center; the first one was for only high schoolers to attend, and the second one was open to everyone. The presentation shown at each session covered the topics of high school boundaries, Special Education, and Career and Technical Education (CTE) programming.

The purpose of these sessions was for the community to learn about the CDD, ask questions, and give feedback. MPS staff have stated that they value communication between the district and the community. Yet, many people who attended the Wednesday info sessions felt disappointed and angered by MPS’s responses to the community’s many concerns.

Caitlin Eide, a Special Education teacher at South, voiced, “I just cannot believe the way they are presenting this plan. They’re saying they’re being so transparent, they’re including everyone, they promise to include all stakeholders and people that are important to the schools. That includes teachers, where have they been? At the meeting this week, there was a meeting right before then that only high school students could go to. None of my students knew about this, I didn’t know about this… Whenever I speak to my students about the CDD, they are scared.”

The current CDD proposals will affect South drastically, from changing the attendance boundaries to which programs will be offered.

The All Nations program will remain at South under the terms of the Metropolitan Urban Indian Directors (MUID) agreement with MPS. However, the future of South’s Open program is a concern that was not addressed in the presentation. Because of the CDD proposing to eliminate Open programs at the elementary level, South’s Open program could be eliminated as well. When asked about it during the moderated Q&A, the panelists (made up of Superintendent Ed Graff along with other MPS staff) said that it isn’t currently included in the plan – it hasn’t been taken into consideration yet.

In fact, many of the responses to questions asked that evening were indefinite. The panelists also mentioned that the proposed high school boundaries weren’t set in stone and would continue to shift. The overall message was that MPS hadn’t finalized many of the details and nuances of the plan. Multiple variables are still changing, even with the vote approaching in April.

Ezra Gearhart is a 9th grader at South who attended the 2nd info session on Wednesday. He spoke on the new communication about how high schools will be affected by the CDD, stating, “(The info session) was informative, but what they really need to do is have an actual community discussion, and they have not been doing that. It was not a place where the community could give input on their schools. That can’t be how we make decisions in Minneapolis Public Schools.” He went on to mention that the people who came to the info session were about 95% white people, that it wasn’t an accurate representation of the communities and families who will be affected by the CDD.

Racially Isolated Schools (RIS) are defined as schools with greater than 86% students of color (SOC) or white students. Currently, MPS has two high schools that count as RIS: Henry High at 91% SOC and North High at 99% SOC. Under the CDD’s modelled boundary changes, there would still be two RIS: Henry High and South High. South would drastically change from being 63% students of color (SOC) to 88% SOC.

The panelists repeated several times the message that our city is segregated, and to a certain extent, there is nothing they can do about it because of the racial make-up of each neighborhood. Audience members questioned, why take South, which is very diverse, and change something that’s already working? The plan appears to make South more segregated in order to make North less segregated.

Superintendent Graff responded to these questions by saying that from talking to South students, he perceives that South is internally segregated. This earned a loud, disapproving reaction from the South teachers and students in the audience.

The presentation slide dedicated to Special Education included goals for Special Ed students, such as an increased graduation rate and more access to core course instruction. What it didn’t include was a specific plan for how to achieve these goals, what methods would be used or actions would be taken to improve Special Ed.

Eide expressed, “I just want to know more about how they plan to actually implement things to achieve these goals that they have. They were not able to share anything near the amount of detail that we all wanted at the meeting, so that was very frustrating… I worry that the needs of the Special Education students are going to be overlooked. Even though the whole goal of it is to provide more services and support to those students, I worry that the actual outcomes are going to be the exact opposite.”

Under the current CDD proposal, South’s Career and Technical Education (CTE) programs such as Engineering and Machine Shop would be moved to Roosevelt, Edison, or North High School. The reason for centralizing the CTE programs is to increase enrollment – instead of having the programs spread out across the city, MPS wants more students to go to the same places for part of the day to give more students access to the programs. It was unclear when the CTE programs will be moved (Immediately in September 2021 when the plan will go into effect, or later on?). It was unclear if students would need to leave South in order to complete their education in these programs.

Gearhart explained, “It could take up to an hour for someone to travel one way (to a CTE program), which means it could take two hours out of their school day. Anybody that wants to take those CTE courses is going to be impacted in terms of their core education. Or, they physically won’t be able to take those courses because they will be taking courses at their own school and it’s going to eat up too much of their school day.”

The original CDD from last spring of 2019 intended to help decrease the school district’s $19.6 million budget deficit. However, in the info session, it was made clear by the Superintendent that decreasing expenses is not the CDD’s purpose. This raises the question of whether the $19.6 million deficit should be one of the most important factors taken into account when redesigning the district.

If you want to learn more about the CDD, this Thursday, March 5, MPS staff will present the next version of the CDD to the Board of Education. It will take place at 6 PM at the Davis Center. This meeting’s focus will be on mid-year academic updates as well as CDD Updates.