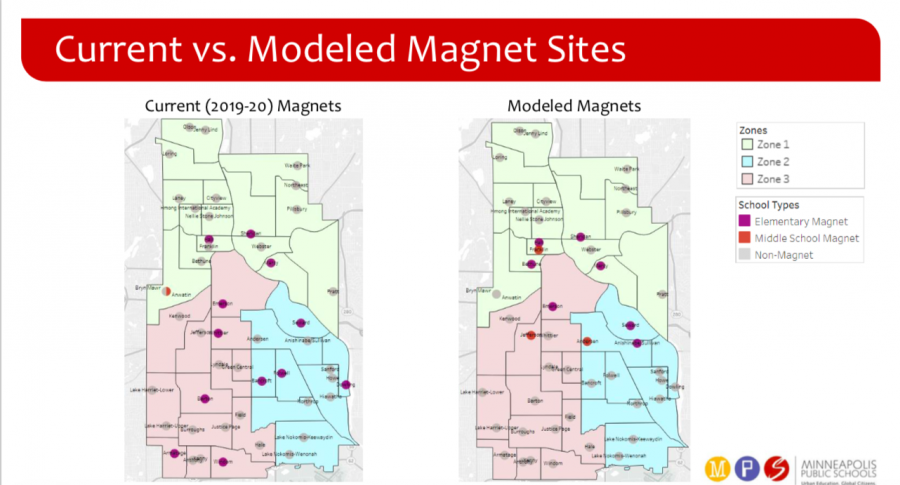 Taken from the "Phase 2 Boundary Study" slideshow released by MPS, this map of the district shows how magnet schools might be reduced and relocated to more centralized locations. In this model, magnets at the elementary level would reduce from 12 to 7 schools, while middle school magnets would increase from 1 to 3 schools.

Did you know that in less than two years 63% of elementary and middle school-aged students in the Minneapolis Public Schools district (MPS) could be forced to change schools?

MPS is currently in the process of creating a new plan that involves redrawing school boundaries along with many other changes. The Comprehensive District Design (CDD), if approved by the school board in April, will go into effect in the 2021-22 school year.

The first version of the CDD was proposed last April but was rebooted over the summer after community pushback. MPS released two boundary studies in late November and early December which looked at how redrawing boundaries, eliminating K-8s and changing magnet schools would affect the racial and socio-economic segregation within the district, as well as reduce transportation costs. Other parts of the CDD include the Academic Plan and the Student Placement Study.

The goals of the CDD include: reducing the concentration of poverty at any school to below 80%, reducing the number of racially identifiable schools (RIS) with over 86% students of color or white students to support integrated student bodies, and saving money on transportation. In order to realize these goals, the CDD makes a number of proposals that involve major changes to our current school system.

The CDD proposes to eliminate all K-8 schools, separating them into K-5s and 6-8s (a few schools may divide the grades differently). MPS believes that K-8 schools cannot provide a well-rounded school experience to middle-schoolers. For example, some argue that K-8 schools don’t have as many electives and limit students’ opportunities. However, others believe that a parent’s right to choose what kind of grade configuration their child participates in should not be taken away. The benefits of a K-8 education range from building stronger bonds with teachers to parents not having to transport multiple children to multiple different schools and keeping siblings together in the same school.

Nadira Yusuf, an eighth-grader at Barton, explains, “That’s kind of how it is at Barton – the bigger ones give an example to the smaller ones. In K-5s, the kids are all small and don’t really have anyone to look up to… I don’t understand why they would change something that’s been so nice for so many families. Since our family has been going there ever since the first child up to the fifth child, just knowing that they’re changing the school that we’ve been with for such a long time is pretty sad.”

If the CDD is passed as is, all Open programs at the elementary and middle school levels will be eliminated. While the CDD documents state that high schools will not be affected, this change raises the question of whether South’s Open Program will survive if there are no or a decrease in pathways to enter the program. This could take away the option of experiencing Open education not only as an elementary student but as a high schooler too. This could also affect South’s diversity, as South would then draw fewer students from outside its community.

In addition, the CDD proposes to redraw community school boundaries and reduce the number of magnet schools in order to decrease segregation. The Phase 2 boundary study projects that Racially Identifiable Schools (RIS) will be reduced by 10 schools. This sounds like a promising result on the surface, but there is disagreement about whether this change is meaningful. 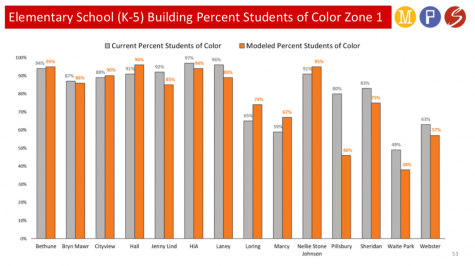 Taken from the “Community School Boundary Study: Board Retreat” presentation released by MPS, this chart visually represents how the CDD would affect the percentage of students of color (SOC) in Zone 1, the most northern zone in the district. A Racially Identifiable School (RIS) is defined as a school with less than 86% SOC, or white students. School board member Bob Walser argues that the change of percentages happening in Zone 1 is too small to make a real difference in combating segregation systemically, even if some of the schools go from being a RIS to a not RIS.

School board member Bob Walser voiced, “The problem is that, to me, most of the changes that we see where integration has increased are very small. If I were seeing dramatic change I would be much more interested, but I’m not seeing dramatic change anywhere. I’m seeing little incremental changes, and sometimes those incremental changes result in crossing a particular threshold so that a school doesn’t get identified [as racially identifiable]. That definition [of what is racially identifiable] is based on a percentage, and if what’s really changing in that school is a change in percentage points of 5%, it may change the designation of the school, but is that a real systemic change or not? That’s the question I’m asking.”

This poses the question: Is it worth it to have 63% of all students leave their schools if the move only results in insignificant changes? Board member Walser also wonders if this disruption will cause people to leave MPS, and what that means for the future of the district.

Last fall, the school board directed district staff to “strategically place, draw boundary areas for, and enroll magnet schools that create integrated school environments without increasing segregation at other schools.” Yet, in Southwest Minneapolis schools like Barton, Kenny, and Kenwood, the percentage of white students is expected to increase by notable amounts.

One of the most dramatic increases in segregation would happen at Barton Open School. Currently, as a Zone 3 K-8 magnet school, Barton enrolls 51% students of color (SOC), close to MPS’s ratio of 64% SOC to 36% white students. But making Barton a K-5 community school and redrawing boundaries will take that percentage down to only 29% SOC.

Yusuf vocalized, “I only found out (about the CDD) last Thursday. When I told my mom, she was shocked. It will affect my little brother – we will have to bring him to a different school. Our parents didn’t want us to go to a school that was specifically just white people, or specifically just one type of dominant race. They wanted a school where we can experience different cultures, so that’s why they chose Barton.”

The CDD also proposes to move all magnet schools to the center of the city, so they are more easily reachable by students from every part of the city. Kenneth Rance, a parent of two MPS students, supports this idea, stating, “I think that moving magnets to the center of the city would make things more equitable for families that rely on public transportation because it would be more centralized.”

The district is trying to improve the quality of education for SOC and students in poverty, not only by moving students to different schools, but also by creating a new Academic Plan for 2020 and beyond. The current document emphasizes a new focus on ethnic studies and culturally relevant curricula and indicates future work on middle school, after-school programs, advanced academics and career pathways.

However, while the district believes that the movement of students will increase the quality of their education, Rance believes the opposite is what’s needed. He explained, “I think instead of bringing students to the teachers, they need to bring teachers to the students. They need to send the most competent and talented teachers and administrators within the district to where they’re needed the most, so that you have equity in your northern schools like North High, like you would at Southwest. Once you have that, then you can have more courses that may be more germane to the students within that neighborhood.”

Rance continued, “I know as a parent, I have an elementary school that is within walking distance of my house, yet I drive my son every day, I pick him up and I drop him off. There’s something wrong about that. Why does my son not walk to Hall (Elementary)? Because when his principal left two years ago, when both of my children went there, there was a decline in instruction and in leadership … A lot of the seasoned teachers left the school, and because of it, Hall suffered.”

Just like last spring, many individuals and groups have again expressed frustration at the lack of opportunities for the community to participate in the process of creating the future plan. While listening sessions started on January 15th and will continue until the 19th of February, many believe it’s too late for their feedback to be seriously considered before the vote in April.

Walser expressed that he is “deeply, deeply troubled by the fact that the community has not been engaged from the beginning of this process. And now, this late in the game, the window of opportunity for the community to engage is very narrow.”

“That’s especially troubling for me because I really believe this to be true, that the district is not skilled at communicating with the communities we serve that are primarily oral, that don’t have English as a first language, and that don’t have access to technology. I’m hearing this from some of those communities, saying, ‘we didn’t even know this plan was coming.’ If they didn’t even know this was happening, how can they get up to speed on it?” continued Walser.

New information is constantly being released by MPS regarding the proposed future of the district. If you’re interested in learning more about the CDD, staying up to date, and giving your input, there are listening sessions coming up in addition to board meetings. You can find schedules on the MPS website under Comprehensive District Design, as well as more information, an online survey and the studies mentioned in this article. You can sign up for updates on the CDD on the MPS website as well.