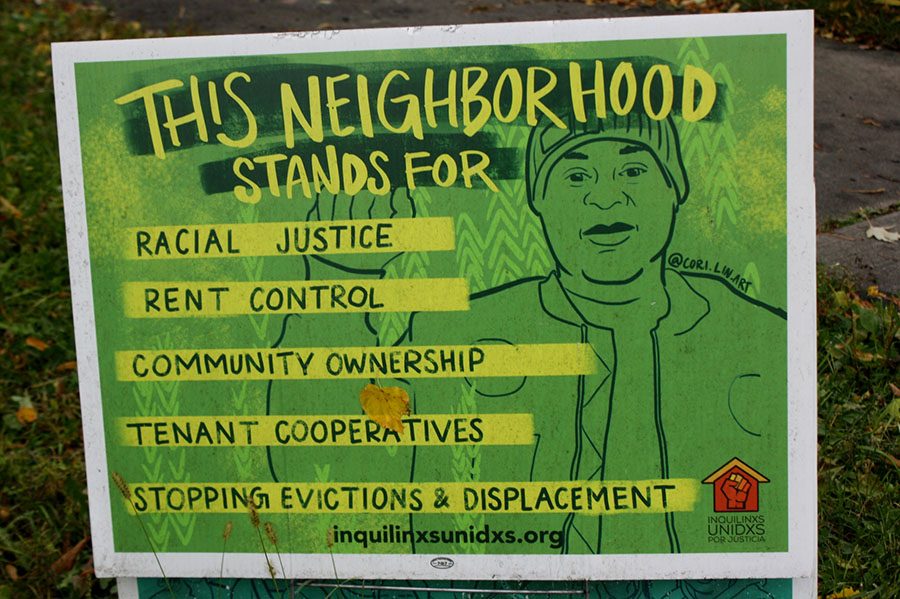 Neighbors of the Corcoran Five put out yard signs in support of the buildings and renter protection. “People have been really supportive of the neighbors and gaining ownership of the buildings, they know the value to the neighborhood. That’s a really critical corner for us we know that when we see families playing and just hanging out in the yard of their apartment buildings vs. just seeing a run-down apartment building. It is so much better when you see families,” said Alicia Smith, the Executive Director of the Corcoran Neighborhood Organization.

Winters with no heat, flooded apartments, bug infestations: for the past decade, tenants in five buildings in the Corcoran neighborhood have been fighting their landlord against evictions, lack of maintenance, and now the right to own their buildings. Landlords are supposed to be resources for their tenants. They are the people who tenants reach out to when they have problems but unfortunately, this is not always the fact.

Located a block away from South High, the 22nd Ave Housing Cooperative, also known as the Corcoran Five, is striving toward running their buildings together as a collective of tenants. Throughout the past decade, the 22nd Ave Housing Coop begun organizing against their landlord Steve Frenz. They have gone on rent strikes, protested at the Frenzs’ church, negotiated to buy the buildings, and much more. In their fight to buy their building, they have raised over 7 million dollars, but Frenz refuses to sell to them.

Steve Frenz is the owner of the five buildings in Corcoran and owns over 30 more buildings in Minneapolis. According to the Star Tribune, between 2013 and 2016 Steven Frenz had accumulated 453 housing violations. As a result, in 2017 Frenz’s renter’s license was revoked, barring him from collecting rent from the buildings he owned. As of today Steve Frenz still owns the properties which some consider peculiar do to the fact he makes no profit off of the buildings.

Frenz has stopped paying the building’s bills so the residents in the 22nd Ave buildings had to pay a $14,000 water bill along with gas bills. When asked about what a landlord’s options are when their licenses are revoked, Kim Keller stated “he has a couple of different legal options in front of him, he can sell the building as his, he can renovate the building then sell it adding to the gentrification, or legally he can vacate the building can get evictions and put it on the building registry.” The choice that Frenz has made is to evict the forty families that call the apartment buildings home.

Chloe Jackson is a tenant and organizer who works with the central neighborhood and Inquilinxs Unidxs Por Justicia (United Renters for Justice). She is a black woman from Chicago who moved into her building in 2013. Like many of her fellow tenants, Chloe is a lower-income person of color who needs to have affordable housing to live in the city with her kids. Frenz’s buildings were affordable and most of the renters were people of color. “He preys on people of color, low-income families, women and children, he really preys on that, that’s what he does,” Jackson says while discussing the demographics of renters.

“When I first moved in the apartment was $625, after his license was revoked it went up quite a bit,” Jackson said. “Before we went on this rent strike, rent for a one-bedroom was running $855 with a $50 utility fee so now rent is $750 for a one-bedroom and $700 for a studio.”

Increases in rental prices make renting in the city even more unaffordable, which is why rent control is something the 22nd Ave Housing Coop is fighting for with their neighborhood. Rent control is a regulation on how much can be charged for housing. In Minnesota, there are no current rent control laws.

Eric Hauge, the executive director of Homeline a non-profit legal aid for renters in Minnesota said that as a result of an effort in Minneapolis and St. Paul, to get rent-control laws, “there was a state law passed prohibiting cities from passing rent control laws.” So it is incredibly challenging for rent control laws to be passed. With rent control, affordable housing would be more attainable.

Unfortunately, there is no clear definition of what affordable housing is because “how much housing you have that is affordable vs how many people have incomes that need affordable housing. There’s a mismatch, while we absolutely need housing at an affordable level, it doesn’t match up. It doesn’t always get to the people who need it,” said the Director of Regulatory Services for the City of Minneapolis, Kim Keller.

Affordable housing is especially necessary for communities of color. There are systems in place in the US that have prevented people of color from owning houses. “Property is a way to build wealth, there is a history of discrimination and segregation. It is sort of a continuation of that.” Says Eric Hauge.

According to the US Census in 2019, Black homeownership is 40.6%, Hispanic ownership is 46.6% compared to white non-Hispanic homeownership which is 73.1%. These rates are reflective of housing inequality in communities of color that date back hundreds of years.

Redlining, a discriminatory housing practice that makes prevents people of color from living in certain neighborhoods, in the US legally prevented black families from owning houses in certain communities. “Keeping certain groups of people out of certain areas of the city and metro area as well as just making it difficult for people of color to buy homes which is important to wealth and asset building. So to have thousands of people shut out of the process and every decade having a reiteration of the housing crisis it has continued to contribute to that.” Hauge stated.

Although renters are ignored in some communities, they are an important part of Corcoran. In Corcoran, both renters and homeowners are working to build community and help the 22nd Ave Housing Coop. Alicia Smith is the Executive Director of the Corcoran Neighborhood Organization, she has been involved throughout the process by attending meetings, negotiations, protests, etc. Smith said “The span of renters from 3 years to 20+ years, so you don’t have a lot of folks turning over, people think that renters they think unstable, folks who don’t care about their neighbors, when in fact in Corcoran our neighbors disprove that. Once people find a neighborhood where they find community and feel welcomed by all they stick around.” when discussing the stigma that people sometimes have about renters.

“…We also want to figure out what renters want as well because they are a huge part of our neighborhood and if we lose those 100+ people on 22nd there will be a gaping hole in our community,” Smith said.

As of right now, the 22nd Ave Housing Cooperative is still fighting their evictions and to buy their building. Steve Frenz was tried on the week of October 14th and convicted of felony perjury (lying under oath). This story will be updated when more information is released.