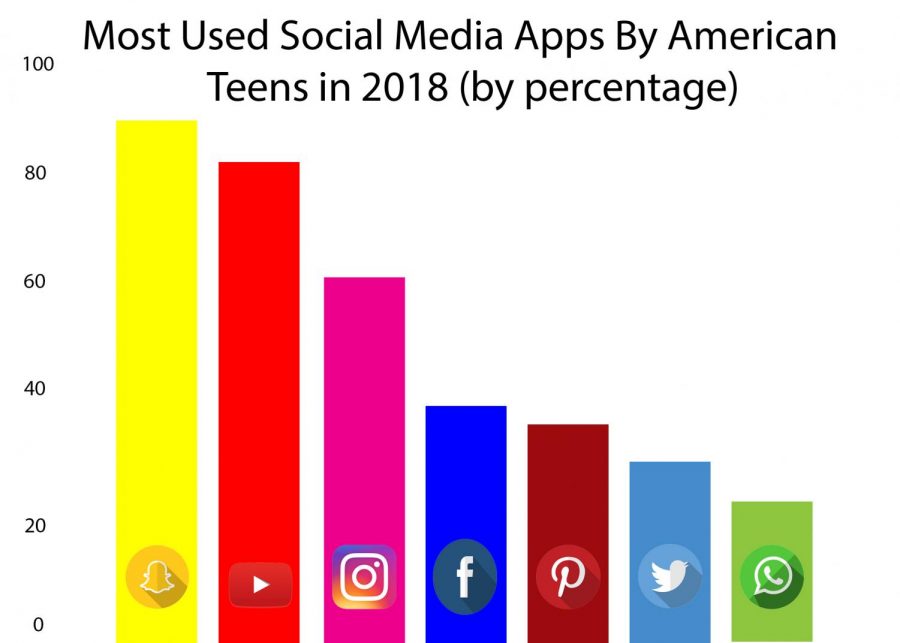 An average teen spends more than 6 hours a day using screens for purposes of entertainment, with much debate surrounding the positives and negatives of this usage.

Screen time usage by teens is primarily comprised of the use of social media, and is used for a variety of different purposes.

Social media has seen exponential increases in popular usage since the early 2000s, affecting the lives of many, especially teenagers, who seem to spend much of their days on screens, sharing pictures and memes or exchanging stories with friends.

The creation of social media has engulfed an entire generation, influencing the behavior and actions of vulnerable people, and changing life as it was known before.

Today’s teenagers have developed along with social media, at the same time being shaped by  the innate design techniques used by developers of these platforms.

Social media platforms have been created on the basis of persuasive design, or techniques used to exploit human psychological vulnerabilities to maximize profit. These techniques have been used effectively, greatly contributing to the overuse of screens and social media within our daily lives.

According to Children’s Screen Time Action Network, “Persuasive technology is the design of digital devices and apps to influence human thoughts and behavior. While these techniques are used for positive purposes, they are also employed with the guidance of psychologists and other behavior experts working in the tech industry to persuade users, many of whom are children, to spend long periods of time using social media and video game sites.”

“We thought we could control it,” said Chris Anderson, the former editor of Wired and now the chief executive of a robotics and drone company.  “And this is beyond our power to control. This is going straight to the pleasure centers of the developing brain. This is beyond our capacity as regular parents to understand,” as written by the New York Times.

The fact that social media and its impacts are so new, having developed within the last decade, the rate at which and for what we are using social media is alarming.

He continued, “So I think the downside of social media is that in capitalism you do what benefits your company the most.”

The use of persuasive design has caused screens to be more addicting, sparking an increase in usage, both for positive and negative purposes. Within schools, there has been an extreme increase in the use of screens, creating a struggle for students and teachers alike. In instances where class or school work becomes boring, phones become an easy and very accessible distraction.

“I think that having [my kids] phones in school is a huge problem. They can never really concentrate on what is actually happening in the classroom with the constant distraction of their phones.” said anonymous, a parent of a 10th grade student at South, “It’s easier to check Snapchat than it is to think of something to pass the time, like reading or doing school work.”

Echoing this idea, sophomore Elena Kehew said, “I think that phones are a pretty big distraction and so if you aren’t motivated during class- it’s very easy to skip work and be on your phone. A lot of people are good about limiting their use, but some aren’t”

She continued, “I feel like your ability to be able to put away the distractions affects how much you can learn and your quality of learning.”

Overall, the quality of learning that a student receives is based heavily on whether or not one can resist the addictive pulls of cell phones and social media.

“I think social media definitely takes away from the personal connections you can make with people, and also it’s become kind of an excuse to not go out and do things. It can make you want to go out and do things for the wrong reasons, just for the likes and the comments,” said Emily May, an 11th grade student. “It can make things fake instead of authentic.”

This creates a constant and seemingly impossible battle for teachers, who struggle daily with whether or not they should take initiative surrounding students excessive phone usage in their class. “I see students who are texting with probably other students [in class] and they’re pretty bitter about it when you ask them to get off their phones,” said Karl Griffin, an AP Computer Science teacher at South. “Despite the larger conversation we’ve had with the students at the beginning of the school year to say, you know, the expectation is unless otherwise specified, you do not have your phone out during class. That should just be the norm.”

“It puts teachers in this position of, ‘you’re in high school, who is responsible for you.’ Is it the teacher’s responsibility? And if they don’t fight you hard enough about your phone every day, then it’s their [the teachers] fault,” said Griffin.

As well he added, “I think it [phone usage] degrades my relationship with the students if I have to go around and say stop using your phone, which becomes an everyday thing. It’s hard to do that everyday and not feel, as a teacher, like these kids have absolutely no respect for me and my class.”

Social media has inevitably become a huge part of almost everyone’s lives. However, many have a strong opposing opinion to any use of social media. “To be perfectly honest I have no evidence of anything positive [about social media]. I don’t participate in it, I refuse to. I don’t even have a smartphone,” said Richard Nohel, Economics and AP Human Geography teacher at South.

“This is scar tissue talking. We’ve made every mistake in the book, and I think we got it wrong with some of my kids,” Chris Anderson said. “We glimpsed into the chasm of addiction, and there were some lost years, which we feel bad about,” stated the New York Times.

All though many issues with social media have been brought forth from Silicon Valley, discussion around social media addiction is probably the most hotly contested. Despite this, social media is still widely used, and as of now, does not look like it is going anywhere anytime soon.

“The negative right now is that we’ve discovered a new type of addiction and we don’t know how to manage it yet. There’s going to be a generation of people that fall victim to that. As you know, cigarettes are not a good thing, but we’ve learned a lot from them,” said Griffin.

In addition, he stated, “I think that social media will go the same way. I don’t think there’s any way to go backwards, just like with cigarettes, I don’t think that anybody could wipe them off the face of the earth at this point.”

“I think technology is gonna be much more persistent than something like cigarettes. I don’t think that we could wipe social media off the face of the earth and don’t think that we should, unlike other addictive substances, I think it has this potential to transform itself and there’s people who are working to create technology that’s good for people,” said Griffin.

Others hold a much more negative opinion, with little to no prospect for a positive future surrounding screens and social media.

“In my opinion, it’s all negative. That may be displaying my age but I know a lot of people my age that are completely into it. I just have better things to do with my time. I really believe that all of this stuff, social media, cell phones, rather than bringing people together I think it isolates people more from each other,” added Nohel.

According to the New York Times, “A wariness that has been slowly brewing is turning into a region wide consensus: The benefits of screens as a learning tool are overblown, and the risks for addiction and stunting development seem high.”

Despite this, many still believe that social media and screens can also be a helpful learning tool, aiding in classroom instruction and activities.

“I’ve noticed that when people are on social media and stuff, in classes, using social media, it’s become a really interesting learning tool, especially in my history class, we look up genocide hashtags for class, just to see what’s going on in the world, so it can be a really interesting learning tool,” said Emily May, an 11th grade student at South, when commenting about this topic.

“Personally, I use social media, (Instagram and Snapchat) mostly because it’s a platform for communicating with people,” said Kehew, in response to positive uses for social media.

Continuing, she stated, “Especially Snapchat feels like a way to communicate with people that’s more casual and informal than texting. I also think I use it to keep up with what’s going on with my friends and people I know.”

The constant comparison that social media harbors can be a great detriment to the morale of this generation, perpetuating the increase of mental health disorders, such as depression and anxiety. This poses yet another negative effect of social media.

“The thing that sticks out the most in everything I’ve read is the increased rates of depression and anxiety with social media use,”  said anonymous. “I think this is really sad. It reminds me of a quote that says ‘comparison is the thief of joy’ which I think fits when we spend so much time scrolling through and comparing our lives to others through screens.”

Many studies have been done surrounding this, with staggering findings. “Researchers have found that using social media obsessively causes more than just anxiety. In fact, testing has found that using too much internet can cause depression, attention deficit hyperactivity disorder (ADHD), impulsive disorder, problems with mental functioning, paranoia, and loneliness,” said the Anxiety and Depression Association Of America. “It is more than just the pressure of sharing things with others, it is also about how you may be comparing your life with others you see on Facebook.”

The conclusions surrounding whether social media and screens are helpful or harmful are often hard to make. The many sides of this argument provide numerous perspectives.