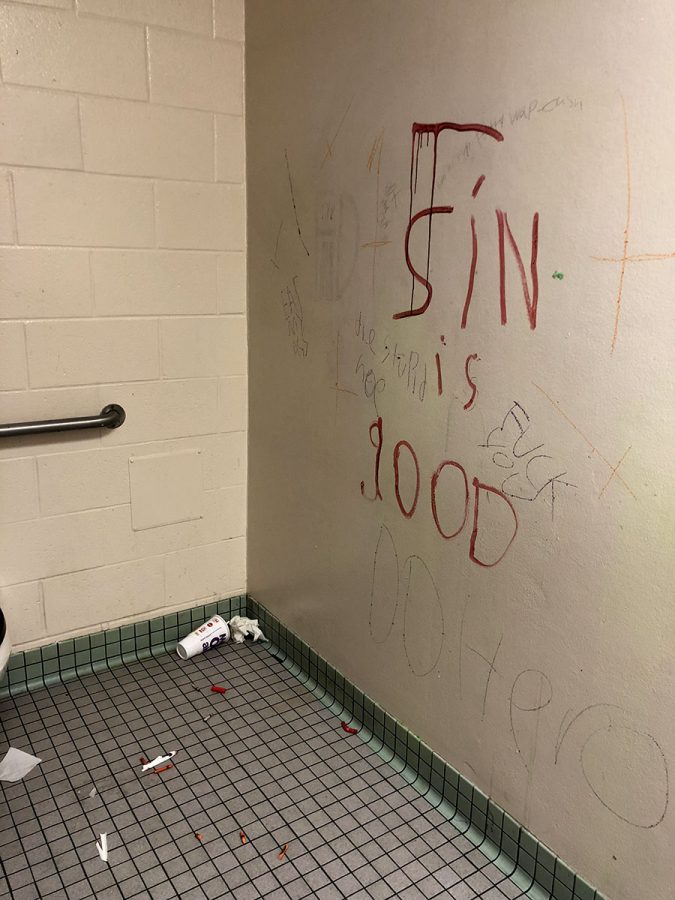 Graffiti like this has been a recurring event in bathrooms, classrooms and other areas around South this year, although custodial staff have continued to clean up the vandalism student and administration have struggled to maintain a positive relationship due to further policing of bathrooms and other school spaces.

Latz feels like the attack was “shocking” but he felt like it wasn’t surprising.  “When you have the president of the United States and major members of his party colluding with anti- semites, racists, and Islamophobes, when you have them provoking fear about asylum seekers at our border, it leads to events like this.  It’s shocking, but not surprising.”

South has been facing similar issues revolving around the rhetoric being used in student to student interaction as well as a multitude of defacement issues including slurs and racist phrases.

“We opened the doors to the community and we had about 450,500 people who attended, and we had a very short memorial vigil,” he continued. “We sang a bit, we told stories, we tried to honor the memory of those who have died, and bring the community together in a show of support.”

Michael Latz believes that a lot of hate crimes could be prevented if we focus more on gun violence prevention and encourage politicians to take stands against guns.  “I hope we can have a big, robust, moral conversation [with people in power] about the society we want to live in because it doesn’t have to be this way, we need old leadership to shift this, but we also need the public to stay active.  Students shouldn’t have to do code red drills in school.”

Part of what makes South such a unique school is its strong student organized social justice oriented action organizations. South also represents a huge portion of students of color in the district which is part of what is so damaging about the current unmoderated climate when it comes to slurs and hate speech or hateful acts in general.

Part of what has put such an intense strain on the South community relating to the election of our current president is the combination of his proposed policy and fanbase.

Although Liberal politics have made strides over the Obama presidency, Trump has suggested the reversal (and sometimes beyond reversal) of said policy such as legislation protecting transgender citizens.  He also has continued to militarize police, further straining relationships in neighborhoods where people of color are primarily affected by police violence.

Although South is lucky enough to have avoided suffering an event as drastic as a shooting, the school is no stranger to violence based on racial tension.  Since the beginning of the 2018 school year hate speech and slurs have become a noticeable feature of Souths halls.

Beyond the guns themselves with the 2016 election of our current president Donald Trump whose entire platform revolves around the idea of speaking one’s mind or not conforming to the expectations of politically correct speech and actions hate crimes and hate based rhetoric have risen and continue to affect minorities across the nation but especially here at South.

Although still notable yet arguably on a smaller scale South has been facing its own major issues relating to religious and racial bias. Certain South students have been defacing school property from classrooms to bathrooms. Racial slurs have made an increasingly prevalent appearance at South this year.

Frequently found in bathrooms, this misuse has been getting worse as the school year continues. It has gotten so bad that deans and security personnel have been regularly patrolling and searching students in the boys bathrooms on all floors during all hours.  Specific incidents that have happened this year include clogging the toilets, breaking a hole in the urinal, vaping/smoking illicit substances, and graffiti on the stalls/walls.

The graffiti has reportedly included xenophobic slurs as well as messages specifically threatening or attacking the custodial staff of color. These threats continue being graffitied in the bathrooms despite immense custodial effort to erase them.

The bathroom graffiti is however not the only issue the custodial staff is dealing with this year.  Students have taken it upon themselves to spread the defacement into areas like classrooms, hallways, and the commons. Graffiti containing hate symbols and slurs has been discovered in a multitude of areas around the schools including but not limited too: the bathrooms, classrooms, hallways, lockers and lunch room tables.

The motivation for such destructive acts is unclear. Unsurprisingly, it has left students like junior Adam Denami feeling uncomfortable and unsafe when racially motivated profanity and slurs are etched into surfaces around the school, “The bathrooms are kinda crazy, people have been doing stuff this year that hasn’t been going on the last two years… like the racial slurs and stuff are really messed up.”

Certain custodial staff members have been receiving notes directed directly towards him on a daily basis. In some cases they notes exhibit threatening or demeaning messages that often include slurs and other crass language.  With the exception of one security staff member South has a mostly male security staff this means that they are able to search and remove people from the bathrooms easier which is part of what is so illogical about the entire situation, because despite the heavier security, students who use the boys bathroom continue to display racial slurs and gang signs.