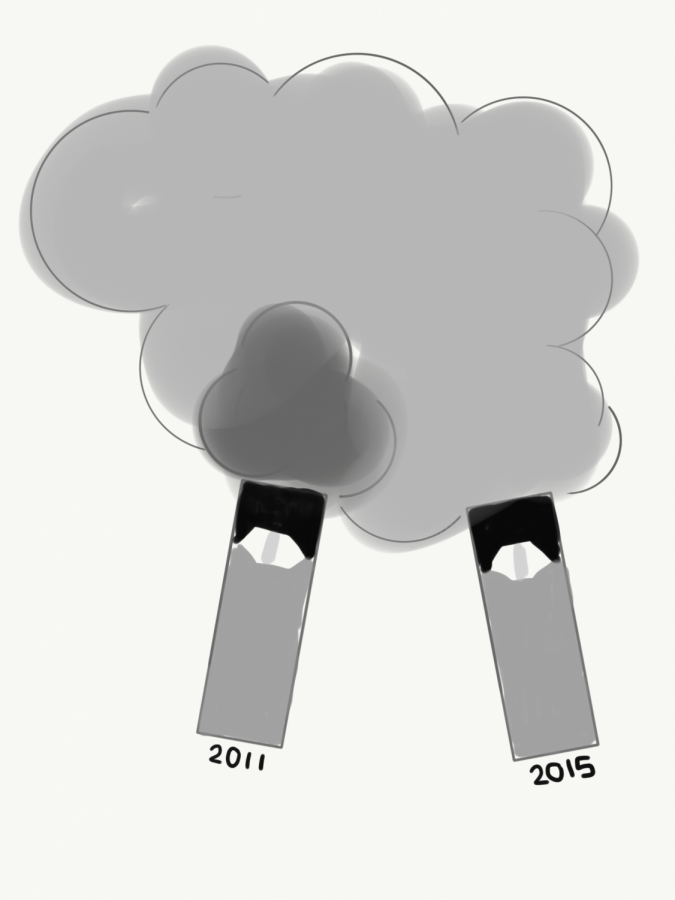 The percentage of high school aged students using vapes rose drastically since 2011 and continues to grow.

Vaping is a popular activity among high-school aged students. Although it is illegal for minors to buy vapes and e-cigarettes containing nicotine they still find themselves using them and even becoming addicted in some cases.

Usually people who are underage will get a vape from an older sibling or friend. People of age will buy vapes to sell them to minors where they are high in demand. This results in more minors having access to products with nicotine.

In a study done by the FDA the use of e-cigarettes rose among high-school students from 0.6% to 16% between 2011 and 2015. And the numbers are only going up as they become more popular among students. “I think it’s the cool thing to do for some people,” said Jessica (whose name along with all other underage e-cig users in this article has been changed to protect their privacy).

“It’s fun to do tricks and stuff and it’s people think your cool,” added Debbie. “I feel like some people do it just cause they’re like: ‘Oh I wanna be cool like look I vape.’”

Nicotine is found in almost all e-cigarettes which is a chemical that provides a ‘kick’ for users. This is when your body releases adrenaline resulting in a pleasurable sensation. “It made you feel good and it was fun to do some tricks,” recalled former user Justin. “It feels good, it’s fun,” Jessica agreed. “It also helps with stress and anxiety,” she continued.

Nicotine can give you an overall good feeling which many people find benefiting to the stressful school environment. “It’s kinda like a stress reliever… People do it between classes in the bathrooms,” said Jessica. Bathrooms are a popular place to vape and are sometimes referred to as Juul rooms.

There are students vaping everywhere. “I think it’s become so normalized and so like nobody really I mean people talk about it but not like it’s a big deal…” said Sam. It is a normal thing now to vape within the high school aged community.

But it is not all fun and games, vaping also has many drawbacks. “I got way less athletic,” Justin admitted. There are some chemicals in e-cigarettes that could irritate the airways in your lungs. It is still unclear if vaping causes any long term effects. The nicotine in vapes can lead to using tobacco products. “They don’t plan ahead and you don’t really think about this stuff that you’re doing now and how it’s going to affect you later on,” said Sam.

Nicotine is highly addictive which causes users to experience withdrawals if they go without it for periods of time. “I need it to do things… I’m just definitely very reliant on it,” said Jessica. Being addicted to nicotine may cause you to not be able to function properly without it meaning you will be hooked on it and it is really hard to quit. “Once you get addicted you kinda can’t stop,” said Debbie. Being addicted can be dangerous because it could lead to smoking tobacco products. “Everybody says that they’re not but like you don’t really know for sure whether or not you are,” said Sam.

Vaping can also be harmful for your friendships, not just your body, “Obviously you want what’s best for your friend and you want to make sure they are making the right decisions,” Sam said. But according to Jessica, vaping can also build them “It’s just like a whole new community like everyone’s trying to vape now,” she said.

Many people find vaping with nicotine a good thing. It is described as helpful to calm nerves and fun. But there has yet to be extensive research about the chemicals in vapes and what effect they can have on people long term. In the meantime, high schoolers aren’t waiting for science to catch up with them, numbers of high school aged vapers are increasing and many are becoming addicted.